Independent voters sour on Trump’s handling of the economy

A growing number of independent voters disapprove of President Donald Trump’s handling of the economy, as the president’s job approval rating remains stuck at historic lows. This is according to a new PBS Newshour/NPR/Marist poll, released Wednesday.

Forty-nine percent of self-identified independents said they believed Mr. Trump’s decisions in office have weakened the United States economy, the poll found. Just 31 percent said they felt that the economy has grown stronger under Trump.

In March, the last time the survey asked independents about Trump’s impact on the economy, 44 percent had a positive outlook, while 38 percent held an unfavorable view. 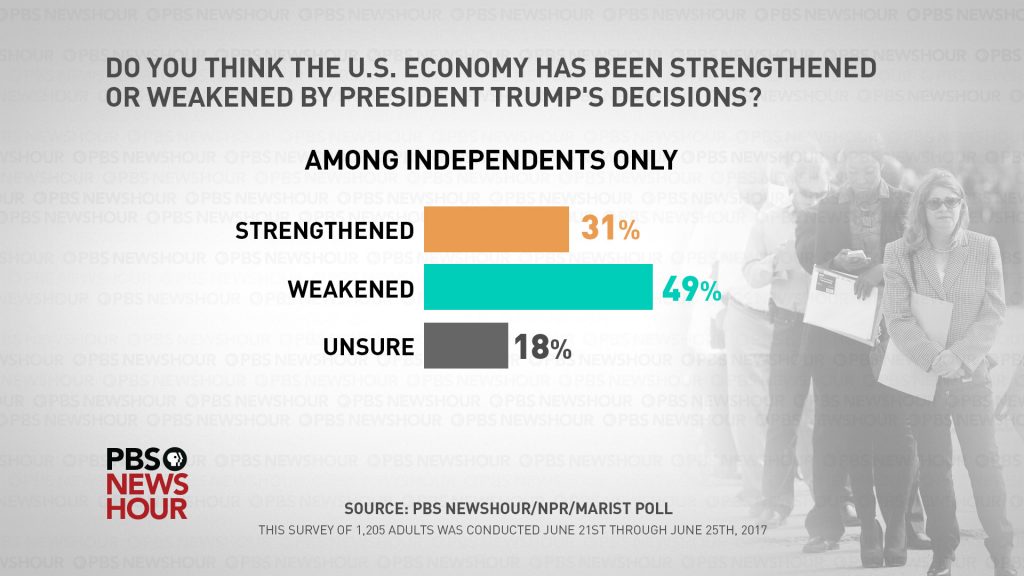 The shift represents a broader political problem for Trump: his inability so far to widen his base of support to include more independents and moderate Republicans, many of whom appear increasingly skeptical that he can deliver on his campaign promise to grow the American economy and create millions of new jobs.

Five months into Trump’s presidency, independent voters have “soured about how things are going economically, and are having doubts about what President Trump can do on the economy,” said Barbara Carvalho, the director of the Marist Poll.

The survey underscored other areas of concern for Trump, beyond voter attitudes about his economic policies. The poll of 1,205 U.S. adults was conducted June 21-25, and has a 2.8-point margin of error. Of those polled, 995 were registered voters.

Overall, 61 percent of U.S. adults said they believed the country was headed in the wrong direction. Fifty-six percent said they held an unfavorable view of Trump, compared to just 37 percent who view him positively.

The results largely broke down along party lines. Eighty percent of Republicans approved of Trump’s job performance, compared to just 8 percent of Democrats who felt the same way.

Overall, 61 percent of U.S. adults said they believed the country was headed in the wrong direction.

Still, the poll found that Republicans and Democrats alike are dissatisfied on a range of issues, including the Trump administration’s decision to pull out of the Paris climate accord, and the House and Senate Republicans’ plans to overhaul the nation’s health care system.

For Trump, the poll was the latest reminder that he remains unpopular with a majority of Americans.

Trump’s approval ratings have varied since Marist began tracking the numbers in mid-2016. In Marist’s first poll last July, just 30 percent of voters said they viewed Trump favorably. The survey was taken about two weeks before the start of the Republican National Convention, as Trump was emerging from a bruising GOP primary race.

Trump’s approval among voters has been higher in every Marist poll taken since then, but it has never reached a majority. So far, Trump’s best showing in the Marist poll came last December, when 43 percent of voters said they viewed him favorably.

That poll was conducted as Trump was preparing to take office, before a string of setbacks including court challenges to his travel bans and a widenening of the federal investigations into Russian meddling in last year’s election.

Since December 2016, Trump’s favorability among voters in the Marist survey has remained below 40 percent. 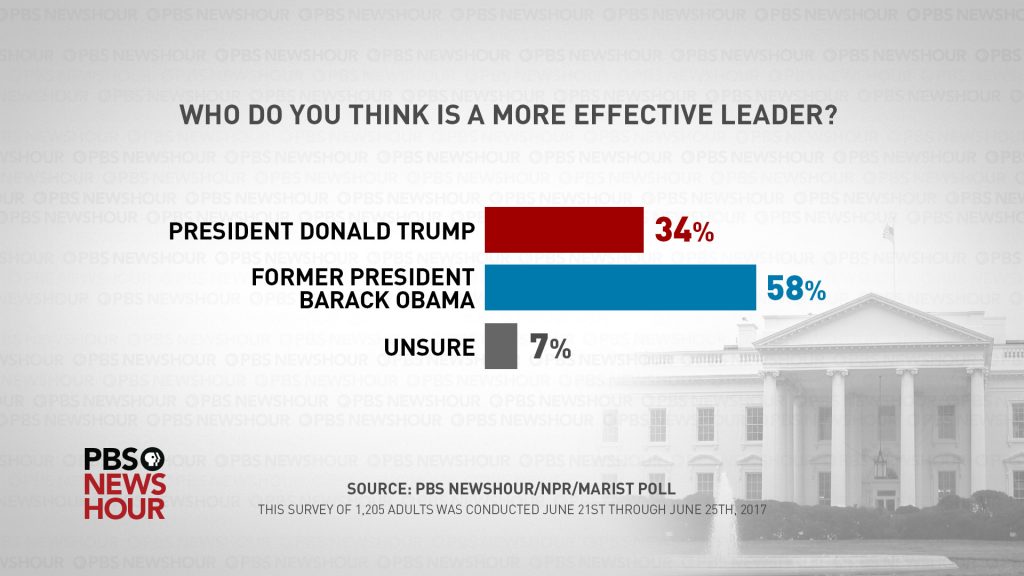 Trump’s approval rating in most major polls has consistently hovered at just under 40 percent, the lowest number for a newly elected president in the history of modern polling.

When Marist polled voters on President Barack Obama at the same juncture in his presidency, in June 2009, his approval rating was 56 percent, according to Lee Miringoff, the director of the Marist College Institute of Public Opinion.

“Not only is 37 a low number,” Miringoff said, referring to Trump’s approval rating, “but in comparison to President Obama, it clearly stands out.”

Left: President Donald Trump walks from Maine One as he returns to the White House on June 16, 2017. Photo by REUTERS/Joshua Roberts