Poll: Young Voters Are Less Fired Up, Ready to Go 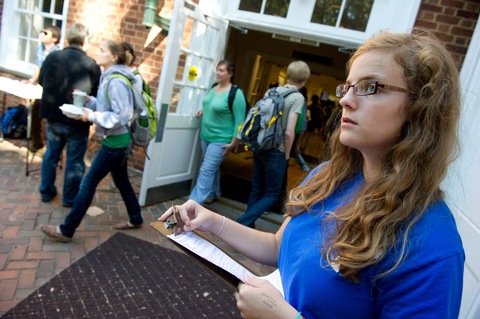 The head of University Democrats at the University of Virginia tries to register voters for the upcoming midterm elections. AFP photo by Saul Loeb

In 2008, then-Sen. Barack Obama won the support of a large majority of voters ages 18-29. Approximately two-thirds of voters in that age bracket supported his bid for the presidency. And overall youth turnout in that election was big: 51 percent of eligible voters ages 18-29 cast a ballot in 2008.

Fast forward to our current 2010 midterm election cycle. While midterms are usually defined by lower participation levels compared to the higher-profile presidential races, a new Harvard University study shows just how disengaged younger voters are from the process compared to just two years ago.

Harvard’s Institute of Politics polled 2,004 people ages 18-29 in late September and early October and found that just 27 percent said they will definitely vote in the 2010 midterms, nine points lower than what that age group told Harvard in a version of the poll taken 11 months ago.

You can read the executive summary of the poll here.

That finding mirrors past trends: in the 2006 midterms, according to the Center for Information and Research on Civic Learning, 25.5 percent of young people aged 18-29 voted.

John Della Volpe, director of polling for the Institute of Politics, said on a conference call for reporters that finding goes against typical enthusiasm levels for voters prior to elections.

“Typically as we move closer to an election, people feel more enthusiastic not less enthusiastic. This is the third poll that we’ve conducted in approximately the last year and in every single poll, the number of Millennials who tell us they definitely are voting has been decreasing,” Della Volpe said.

Millennials also had a six percentage point drop in reported level of political activism compared to eleven months ago: just 18 percent told the Harvard poll that they were politically engaged or active in the most recent poll, compared to 24 percent in November 2009.

And for Democrats, this lack of enthusiasm will likely hurt: the poll found that a majority of young people prefer a Congress controlled by the Democratic Party. Fifty-three percent of young Americans said they preferred Democrats to run Congress, while 42 percent preferred Republican control.