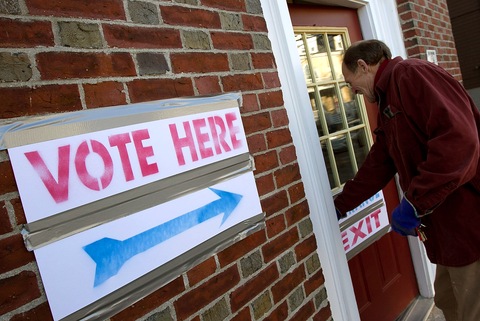 A voter enters a polling station to cast a ballot in the Republican presidential primary in Cambridge, Mass., on Tuesday. Photo by Win McNamee/Getty Images.

Updated 9:14 p.m. ET | As Super Tuesday polls closed at 8 p.m. ET in three states, Mitt Romney was projected to be the winner in Massachusetts, where he was governor from 2003 to 2007, according to The Associated Press.

At 8:39 p.m., Rick Santorum was projected as the winner of Tennessee’s primary.

At 9:06 p.m., Santorum was also projected to win in Oklahoma.

At 10:27 p.m. ET, Santorum was projected to win the Republican caucuses in North Dakota.

Among the 10 states voting this Super Tuesday, 419 delegates are up for grabs, according to the AP. It takes 1,144 to secure the GOP presidential nomination.

All of Tuesday evening, our livestream will bring you the latest NewsHour broadcasts, candidate speeches and results from the primaries and caucuses.

Check your local listings, catch the broadcasts on your local station’s website or watch right here on our livestream.

Also on our livestream, we’ll bring you results and analysis straight from the NewsHour’s newsroom. We’ll also take your questions and comments, so send us your thoughts by mentioning @NewsHour.