WASHINGTON (AP) — Rep. Nita Lowey, the first woman to lead the powerful House Appropriations Committee and a 31-year veteran of Congress, announced Thursday that she will retire at the end of next year.

The 82 year-old New York Democrat tweeted that it’s been a “deep honor and privilege to serve my community and my country.”

Lowey is a longtime ally of House Speaker Nancy Pelosi, D-Calif., and is one of Capitol Hill’s old-school dealmakers. She combines a grandmotherly demeanor with decades of hands-on experience, especially in the annual foreign aid bill, where Lowey has fought for money to combat AIDS, fund women’s health and education, deliver economic aid to developing nations and been a reliable ally of Israel.

“Frankly to have a job that I love so very much made this a very difficult choice,” Lowey said in an interview. “But I just felt it was time.”

She rose to the top of the committee earlier this year and was thrown into negotiations over ending the government shutdown and the battle with President Donald Trump over money for the U.S.-Mexico border wall.

In August, Lowey attracted a primary challenger from the left in Mondaire Jones, who worked at the Justice Department in the Obama administration. A mother of three who didn’t enter public life until her 50s, Lowey has not had a difficult election in years. 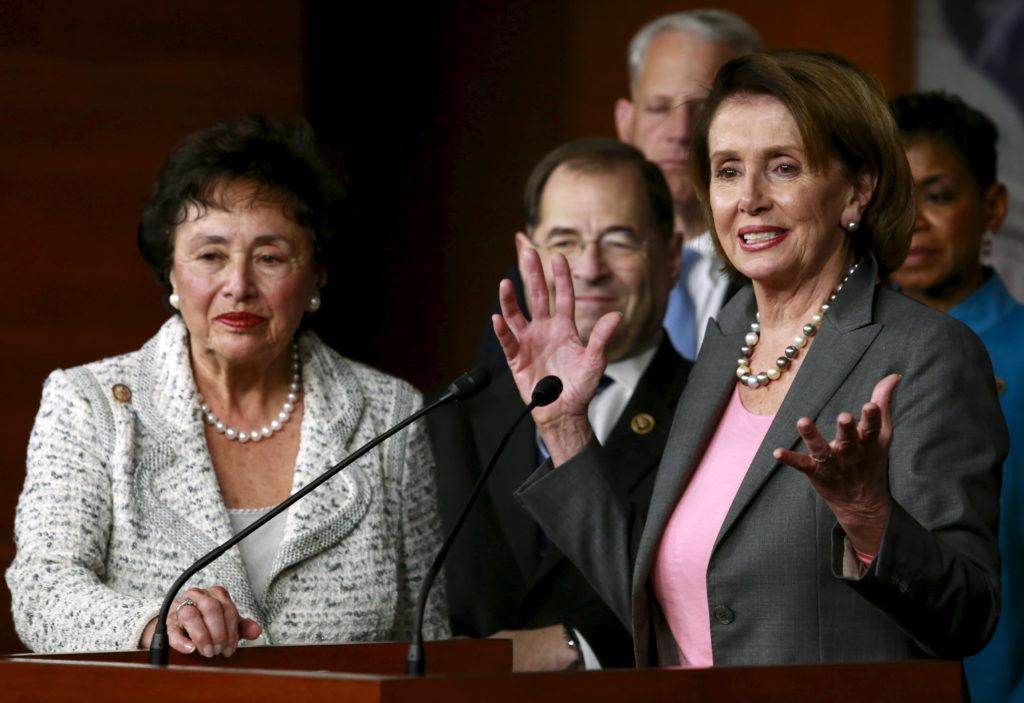 Lowey is a longtime ally of House Speaker Nancy Pelosi, D-Calif., and is one of Capitol Hill’s old-school dealmakers. Photo by REUTERS/Yuri Gripas

Lowey often stops in Capitol hallways to catch up on news about the families of Capitol Hill maintenance workers and others. Pelosi, in a statement, described Lowey as “a leader who is both gracious and tenacious; who seeks always to find common ground where she can and stands her ground where she can’t.”

Rep. Kay Granger, a conservative Republican from Texas and longtime friend of Lowey’s, said that from their first interaction, Lowey “promised that she would always be an honest broker, that she would respect my position and opinions, and that we could disagree without being disagreeable.”

Lowey has slowed down physically of late but has remained very much in charge of the wide-ranging business of the committee. Her slow amble through the hallways of the Capitol makes her easy to approach.

She has used her perch to advocate for public works spending for new rail tunnels into Manhattan and recovery assistance from Superstorm Sandy. More than 20 years ago she led a successful fight to deliver contraception coverage to federal workers via their federal health insurance plans, winning an uphill victory over then-Speaker Newt Gingrich, R-N.Y.

Lowey’s retirement immediately prompted speculation that her seat could be an attractive target for Chelsea Clinton to launch a political career, though she lives in new York City. Bill and Hillary Clinton maintain a home in Chappaqua, New York, in Westchester County.

The 17th Congressional District is north of the city and includes Rockland County and parts of Westchester County.

Left: Lowey is a longtime ally of House Speaker Nancy Pelosi, D-Calif., and is one of Capitol Hill's old-school dealmakers. Photo by REUTERS/Yuri Gripas