At a speech in Gettysburg, Pennsylvania, last month, then-Republican presidential nominee Donald Trump released his plan for his first 100 days in office. At the time, Trump was trailing Hillary Clinton in the polls, and the likelihood of him winning the presidency — according to pundits, pollsters and most strategists on both sides of the aisle — seemed remote.

But Trump won. Now, as the president-elect moves forward with his transition to the White House in January, Americans are paying more attention to his 100-day plan to figure out what Trump wants to do, and how he might do it.

The plan, called the “Donald J. Trump Contract With The American Voter”, has two parts. One is a list of 18 measures, many of them through executive action, that Trump would take on his very first day as president. This list includes a proposal to place term limits on members of Congress, remove restrictions on domestic oil and natural gas production, and renegotiate or withdraw from the North American Free Trade Agreement, or NAFTA.

On his first day, according to the plan, Trump would also “cancel every unconstitutional executive action, memorandum and order issued by President Obama.” Though Trump did not specify how he would undo Obama’s executive actions, he would presumably do so through executive actions of his own.

Additionally, Trump said he would begin the removal of 2 million “criminal illegal immigrants,” and “suspend immigration from terror-prone regions where vetting cannot safely occur” — a version of his controversial campaign promise to ban Muslims from entering the county.

Trump’s list of 18 executive proposals for his first day in office also includes taking steps to fill the Supreme Court seat of Justice Antonin Scalia, who died last February. In the contract, Trump said he would “begin the process” of nominating Scalia’s replacement, though he did not specify if that meant he would announce the nomination on his first day, which is unlikely, or start reviewing the list of potential nominees he released during the campaign.

The second part of the plan is a list of 10 legislative proposals that Trump said he would introduce to Congress and pass within the first 100 days of his administration. 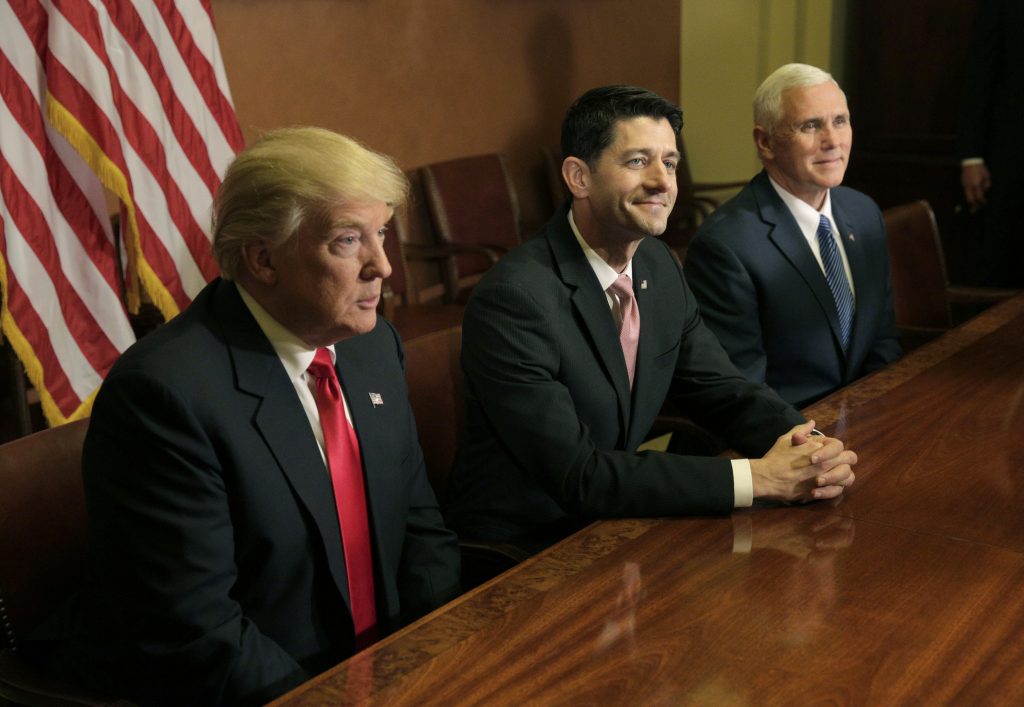 The list includes a tax reform plan, which would cut corporate and personal income tax rates, and a proposal to build a wall along the U.S.-Mexico border, one of the signature promises of Trump’s presidential campaign. In addition to building a border wall, that proposal, called the “End Illegal Immigration Act,” would create mandatory federal prison sentences for undocumented immigrants who are caught re-entering the country.

And the plan also includes a legislative proposal to repeal and replace the Affordable Care Act, or Obamacare, the current president’s signature domestic policy.

Trump and President Obama met face-to-face for the first time on Wednesday, holding a private meeting in the Oval Office that lasted roughly 90 minutes. Trump told reporters that he meeting “could not have gone better,” but did not reveal further details. Neither did Obama.

After meeting with Obama at the White House, Trump traveled to Capitol Hill to meet with House Speaker Paul Ryan, who will be one of his key congressional allies, along with Senate Majority Leader Mitch McConnell.

“I think we’re going to do some absolutely spectacular things for the American people,” Trump told reporters after meeting with Ryan. Trump added, “We can’t get started fast enough, whether it’s health care or immigration. So many different things.”

Here is a full version of Trump’s plan for his first 100 days:

Page 1 of CONTRACT for the VOTER