The political art that Trump and Clinton inspired

The pro-Trump art show #DaddyWillSaveUs had a hard time finding a venue.

Just days before it was scheduled to debut last month, the New York gallery that had agreed to host the exhibit backed out, forcing the show’s creator, Lucian Wintrich, to scramble last-minute. He found an alternate location a couple miles away for his show, which featured nude male models in Trump’s signature Make America Great Again hats.

While one side of the WallPlay gallery displayed a feminist exhibit, the other side hosted Wintrich’s pro-Trump art. The controversy that followed after the exhibit opened last month prompted Laura O’Reilly, the gallery’s founder, to issue a public apology, a rarity for the art world.

“I had no intention of facilitating a platform for hate,” O’Reilly said in a statement. The divisive exhibition at O’Reilly’s WallPlay gallery was one of several controversial pieces of political art that have popped up around the country as the 2016 presidential election draws to a close.

Therapeutic films, pop-up naked statues, and fake graveyards are among the projects that artists across the political spectrum have used to make bold statements during this year’s divisive election season.

Modern art often provides an alternative medium for people to display their cultural and political values, but with Trump and Hillary Clinton garnering the highest unfavorable ratings of any major party nominees in modern history, the art this election cycle has been unusually dark in tone and substance.

The art this election cycle has been unusually dark in tone and substance.

Doomocracy, a political house of horrors created by the contemporary artist Pedro Reyes, sold out quickly when the show went up at the Brooklyn Army Terminal in New York last month. The show, which features a haunting maze of classrooms, actors with plastic guns, a SWAT team shoving groups of people into armored cars, and an eerie wooden replica of the Statue of Liberty, among other exhibits, was designed to symbolize the dark rhetoric of the presidential race, Reyes said.

“The idea of a haunted house was in itself a Trojan horse, where we could deal with subjects that otherwise people find off-putting,” Reyes said in an interview. “Politics can be a theme without being boring.”

Many artists have chosen to display their frustration, anger and other emotions connected to the election in public spaces. 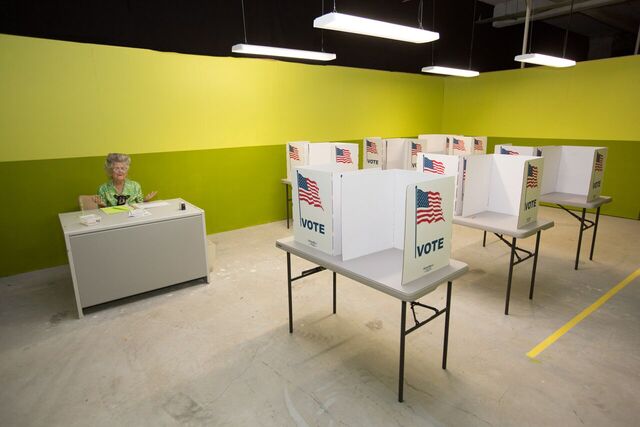 A voting room with actor Marjorie Conn in the role of a poll worker. The interactive exhibit is part of Doomocracy, a political house of horrors art show that premiered in New York last month. Photo Courtesy of Will Star

“Art is operating in so many different venues and platforms that I think the number of audiences being reached has expanded significantly,” said Carin Kuoni, the director of the Vera List Center for Art and Politics.

During the primaries, two artists named David Gleeson and Mary Mihelic bought a tour bus that the Trump campaign had used in Iowa (and was selling on Craigslist), and transformed it into a performance art piece meant to symbolize their disdain for the GOP candidate.

Since October 2015, Mihelic and Gleeson have crisscrossed the country, driving the bus to 30 states and roughly three dozen political rallies.

Predictably, many supporters at Trump events reacted negatively to the bus. But to Gleeson and Mihelic’s surprise, several Clinton supporters also criticized the project. “We went to a Hillary rally and people were driving by calling us fascists and Nazis,” Mihelic said.

Others thought the bus was funny. “We hope this is the beginning of the process” of finding common ground between Democrats and Republicans, Mihelic said. 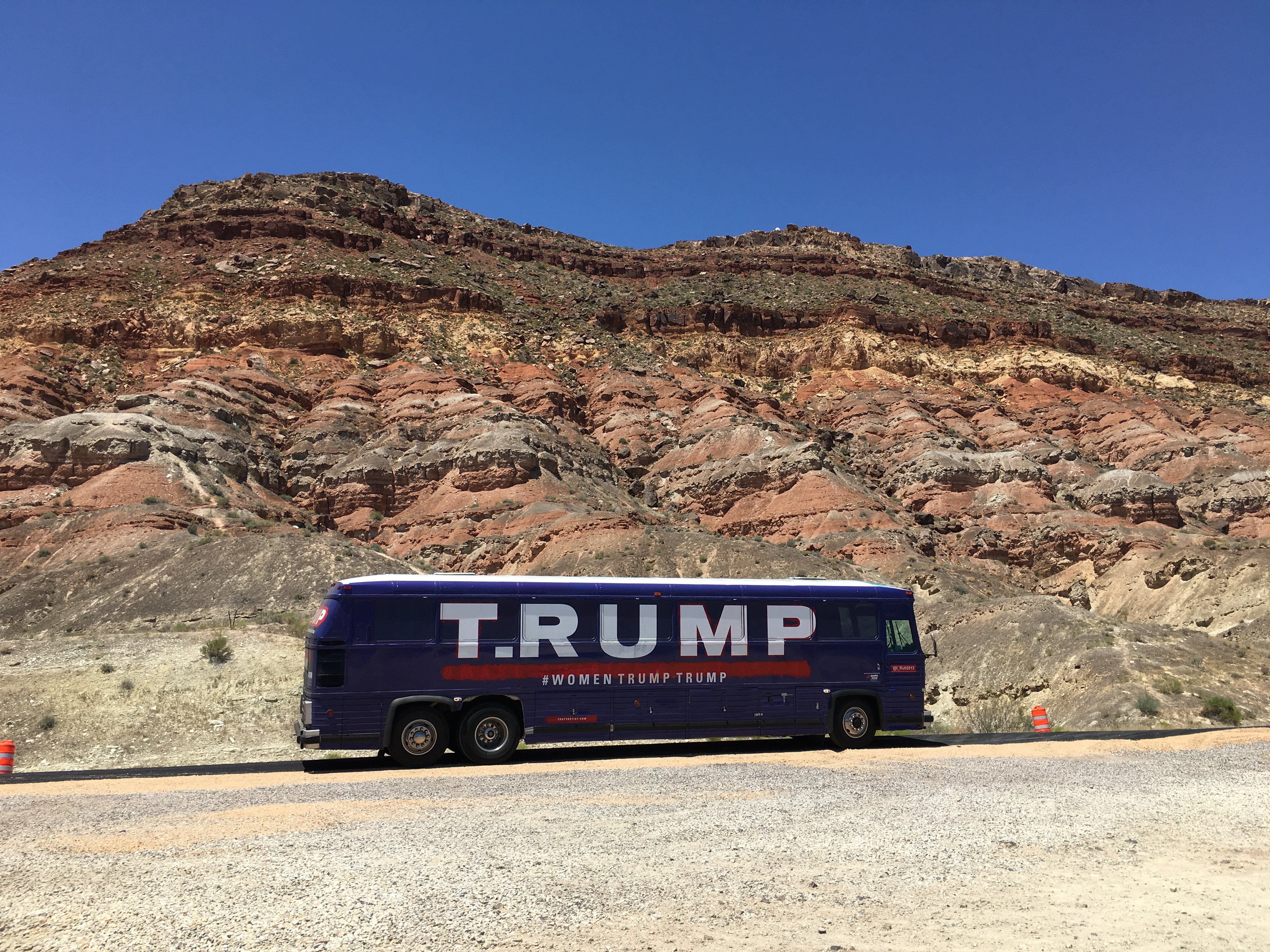 Several works of art have also shown up along the U.S.-Mexico border, where Trump has proposed building a wall as part of his plan to curb illegal immigration. Trump has insisted that Mexico would pay for the fall.

After Mihelic and Gleeson completed a tiny replica of a border wall, they sent the bill to Mexican President Enrique Peña Nieto. Nieto has not responded.

On the other side of the political aisle, Lucian Wintrich, a photographer who created Twinks4Trump, a photo series of gay men who support Trump, said the election had inspired him to be a “a subversive force against the myth of the left dominating the art world.”

“This election has helped a lot of conservative artists to ‘come out of the closet’ in a way,” said Wintrich, whose photo series appeared in the #DaddyWillSavesUs show. But “supporting Trump does come at a cost,” Wintrich said, adding that he has faced criticism from colleagues and critics on social media.

“This election has helped a lot of conservative artists to ‘come out of the closet’ in a way.”

“We are at a unique point in American history where conservatives are part of the arts and part of culture, and progressive puritans are trying to shut us down,” said Wintrich, who is gay. “Our art show served as a slap in the face to the art world and to progressive identity politics.”

Major art institutions have also joined independent artists in creating politically-themed content this year. As part of a larger project focused on political campaigns, the Museum of Contemporary Art Detroit is asking people to watch the election results inside Mobile Homestead, a public art project disguised as a mobile home.

Art Basel, the world’s largest contemporary art fair, is coming to America in the first week of December. The fair will take place in Florida, one of the key battleground states this election, just days before the members of the Electoral College move forward with their final vote.