Will the president’s low approval rating cost Democrats the Senate?

An unpopular president can drag down his party and make life difficult for vulnerable incumbents in tough races.

That can be especially true in midterms when fewer voters turn out. The ones who do show up are generally the most politically active.

President Barack Obama’s approval rating sits at about 41 percent, if you take an average of the last two months of major national polls. So what might that mean for this election?

Democrats are already expected to lose seats–both sides agree. The question is how many. If history is a guide, it could be very close as to whether Republicans wrest control of the Senate.

Republicans need a net gain of six seats to make that happen. Since World War 2, when a president’s approval rating is below 50 percent, as President Obama’s is now, the party out of power has gained an average of 5.5 seats. 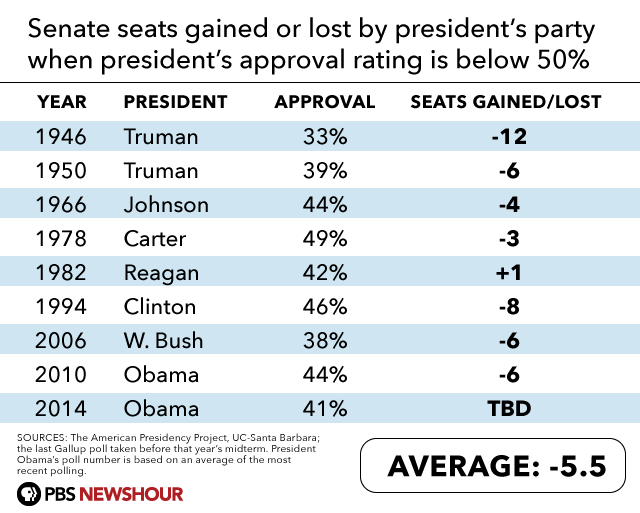 That’s about three seats worse for the president’s party when his approval rating has been above 50 percent. In those cases, though, even a popular president has seen his party lose an average of 2.6 seats. (Combining the popular and unpopular presidents, overall their parties have lost an average of 3.7 seats in midterms.) 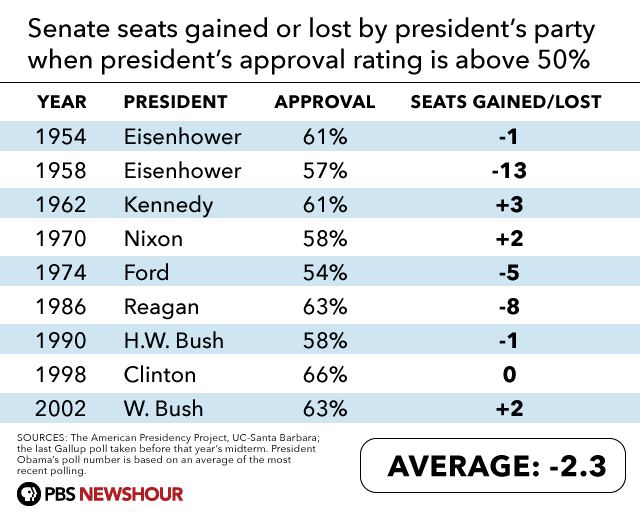 Elections, however, don’t happen in vacuums. Other issues come into play – where the races are being held, who the candidates are, and the popularity of the opposition party.

That’s a big wildcard. Democrats are clearly playing on unfavorable turf. But candidates in Alaska and Arkansas with longstanding family ties – Mark Begich and Mark Pryor – have more than held their own, so far.

And the Republican Party’s brand continues to suffer with favorability ratings in the low to mid 30s. Democrats and the president are slightly higher, in the low 40s generally.

There is also a lot of pessimism–broad majorities see the country as off on the wrong track, many aren’t feeling as good about the economy as the headline economic numbers suggest, and Congress’ approval ratings are at or near all-time lows.

All that may add up to the one constant – a declining interest in politics from the broader electorate. In May, Gallup found interest in this election at a 20-year low.

And in a report out Tuesday, the Center for the Study of the American Electorate at American University found that turnout in these primaries are at an all-time low. Just 14.8 percent of eligible voters have turned out to vote, down from the mid-30s in the 1960s and 18.3% four years ago.