Why presidents pardon turkeys — a history

President Obama presided over his sixth turkey pardoning as commander-in-chief Wednesday at the White House.

The annual tradition sees two turkeys spared from the dinner table, but only one is selected to take part in the White House ceremony.

This year’s duo was “Mac” and “Cheese.” Cheese got to go before the cameras.

“I am here to announce what I’m sure will be the most talked about executive action this month,” President Obama said, his two daughters Sasha and Malia by his side. “Today, I’m taking an action fully within my legal authority, same taken by Democratic and Republican presidents before me, to spare lives of two turkeys — “Mac” and “Cheese.” from a terrible and delicious fate.”

He added, “If you’re a turkey, and you’re named after a side dish, your chances of escaping today dinner are pretty low, so these guys beat the odds. … They’ll get to live out the rest of their days respectably at a Virginia estate. Some would call this amnesty, but there’s plenty of turkey to go around.”

The tradition is not a new one — it’s happened every year for the last quarter century. But there has been confusion about how it all got started.

Bill Clinton in his 1997 “pardoning,” cited President Harry Truman as the first. 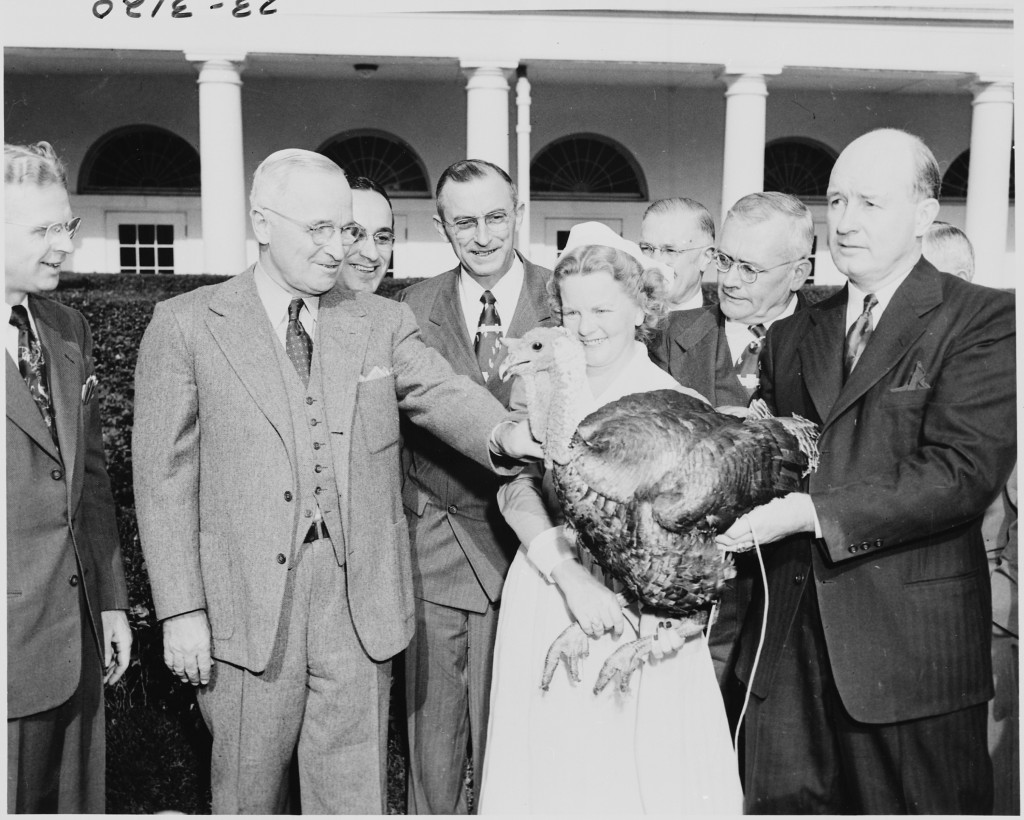 President S. Truman receives a Thanksgiving turkey from members of the Poultry and Egg National Board on Nov. 16 1949. President Truman did not pardon turkeys, and likely feasted on this bird. Photo from Harry S. Truman Library

But Truman never pardoned a turkey. In fact, according to the Truman Library, “Truman sometimes indicated to reporters that the turkeys he received were destined for the family dinner table.”

Truman was actually the first president to receive a turkey from the National Turkey Federation in 1947.

Abraham Lincoln was the first on record to spare a bird, but it was a Christmas turkey his son, Jack, had taken a liking to.

John F. Kennedy was the first president to actually pardon a Thanksgiving turkey. In 1963, despite a sign hanging around the turkey’s neck that read, “Good eating, Mr. President,” Kennedy sent the bird back to the farm.

But it might not have been altruism that led him to his pardon. Taking a look at the bird, Kennedy said, “We’ll just let this one grow.” 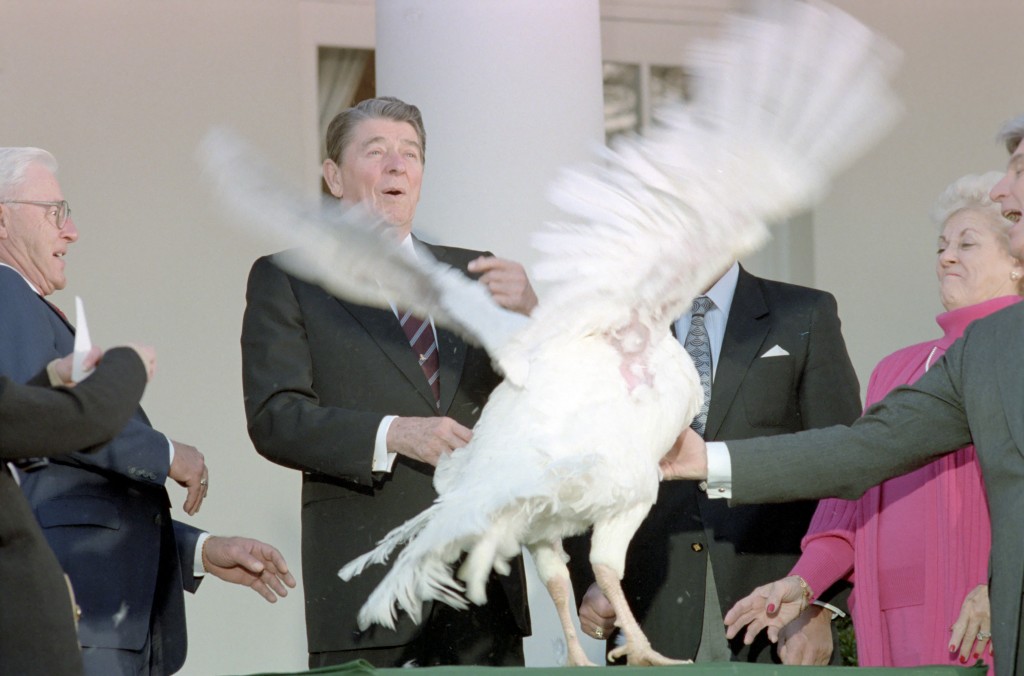 President Ronald Reagan receives the annual White House Thanksgiving turkey, “Charlie,” from the National Turkey Federation on Nov. 23, 1987. This was first time a turkey was “pardoned” on record by a U.S. President. Photo by White House Photographic Office

Richard Nixon also gave the birds a reprieve sending his turkeys to a nearby petting zoo. But the modern incarnation of the turkey tradition was likely spurred by Ronald Reagan.

He was the first to use the word “pardon” relating to turkeys in 1987. But he did so to deflect from hard questions from the press about whether he would pardon anyone involved in the Iran-Contra scandal. He joked that he would pardon that year’s turkey, if he weren’t already headed for the petting zoo.

“Let me assure you and this fine tom turkey that he will not end up on anyone’s dinner table,” Bush said. “Not this guy. He’s granted a presidential pardon as of right now. Allow him to live out his days at a children’s farm not far from here.”

The Virginia farm he was sent to, though, was in the ironically named “Frying Pan Park,” which became the home of the future presidential turkeys for the next 15 years.

After that, the birds spent the next five years at either Disney Land or Disney World before retiring to George Washington’s Mount Vernon Estate in Virginia.

President Obama pardons “Cheese” the turkey the day before Thanksgiving.

This year, Mac and Cheese will be sent to a park in Leesburg, Virginia, a Washington suburb. The property has been used to grow turkeys in the past. The estate was owned by former Virginia Gov. Westmoreland Davis, who raised hundreds of his own turkeys there in the 1930s and 1940s.

The event has become a lighthearted tradition. A turkey in 2000 wore a White House badge to the event. Former President George W. Bush’s administration held a vote on the White House website to choose which bird would be spared. And he joked in 2004 about it being an election year.

“This is an election year,” he said, “and Biscuits had to earn his spot at the White House … Biscuits and his running mate Gravy prevailed over the ticket of Patience and Fortitude. The vice president and I are here to congratulate Biscuits for a race well run. It came down to a few battleground states. It was a tough contest and it turned out some 527 organizations got involved, including Barnyard Animals for Truth.”

Online voting campaigns have become the norm for picking the turkeys. The Obama White House has taken to Instagram, Facebook and Twitter to decide which bird is selected.

But the event is not without controversy. Animal rights groups protest the event because the birds are not exactly “free-range turkeys.” They are industrially grown. And because they are bred to be eaten, and much larger than the average turkey, they don’t live very long after being pardoned.

Last year’s pardoned bird, in fact, died in July of this year.

Crispin Lopez and Rachel Wellford contributed to this report.

Left: President Barack Obama pardons the National Thanksgiving Turkey "Cheese" during the annual ceremony in the Grand Foyer of the White House on Wednesday. John F. Kennedy was the first president to actually pardon a Thanksgiving turkey. Photo by Mandel Ngan/AFP/Getty Images