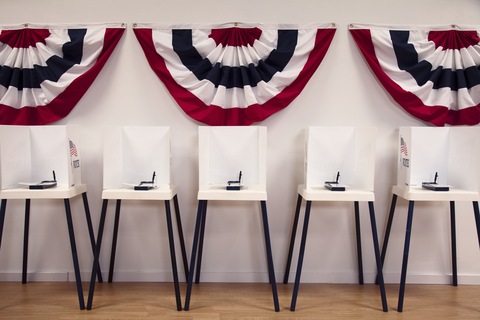 Although voter turnout is usually low, primary elections can be more important than the general election in certain states. Photo by Hill Street Studios/Getty Images.

New Jersey voters head to the polls Tuesday for two critical primary contests that will determine who will be competing in the Oct. 16 general election to find a permanent replacement for the late Sen. Frank Lautenberg, a Democrat.

There are three types of partisan primaries: open, closed, and semi-closed. Closed primaries are only open to those registered with that party. But some states opted for semi-closed primaries to avoid exclusion of independent voters. In that case, independents are allowed to cast ballots in either party’s primary.
In some states, like Utah, each political party is allowed to choose the type of primary the party will hold, so Republicans hold closed primaries and Democrats hold semi-closed contests. There are a few different variations of this system. In 2011, Idaho passed a law allowing parties to choose preferred primary types, but that requires voters be bound to that party affiliation in the next election. In Arizona where the rules are even stricter, only people pre-registered with a political party are issued a ballot.

In an open primary all voters can select a ballot for any party, regardless of their political registration, but they can only vote in one contest. Most states require that voters be registered with some political party. Open primary supporters argue more people can participate when independent voters are encouraged to cast ballots.

Open primary elections were adopted during the Progressive Movement of the turn of the century because they were seen as a way to put power in the hands of the people. Citizens could choose their candidates for office through a popular vote, rather than leaving the selection of a candidate up to the caucus power of political party bosses.

Open primary critics say this system would allow members of one political party to vote in the rival party’s contest in hopes of helping to nominate the weakest candidate. (See Rush Limbaugh’s Operation “Chaos,” for example). This is known as raiding, but there is little proof such a practice has ever actually affected an election result.

In states with closed primaries that lean heavily towards one political party, the primary is the election which usually determines who ascend to office.

In New Jersey, a Republican has not been elected to the Senate in over 40 years. There are two candidates running for the Republican nomination: Steve Lonegan, a tea party conservative who twice sought the gubernatorial nomination, and Alieta Eck, a doctor who has never held public office. This race is widely considered so difficult for Republicans to win that many potential candidates sat it out.

Similarly, the Senate race in Wyoming centers on the fight between Sen. Michael Enzi and Liz Cheney, the daughter of former Vice President Dick Cheney. In a state as Republican-leaning as Wyoming, it is highly unlikely a Democrat would win statewide office. The last Democrat elected to the Senate from Wyoming was John J. Hickey who was appointed to the position to fill the vacancy left by the death of Keith Thomson, who suffered a heart attack before he could assume office in 1961.

California and Washington state have opted for a non-partisan blanket or “Top Two” primary election, sometimes called a “jungle” primary. In these states all candidates for office run on the same ballot in one primary, and the candidate who wins a simple majority of the vote (over 50 percent) wins. If nobody wins more than 50 percent of the vote, then the top two candidates advance to a runoff election.

This was done in order to create more competition among candidates and give citizens who live in areas historically dominated by one party more choices. It is common under this system to have two candidates from the same political party compete against each other in the general election. Under this system, people who are not members of the dominant party can still have a say in which candidate better represents their views.