NEW YORK — When workers pried the Trump name off another Manhattan building earlier this year, it capped a bad few weeks for the president’s businesses.

“He can be very polarizing. … The brand has been diminished.” – Jeff Lotman, CEO of licensing firm Global Icons

Donald Trump’s golf resorts in Scotland had just posted millions of dollars in losses, one of his hotels in Panama had rebranded itself a Marriott, and New York officials announced they were looking into how he avoided paying tens of millions in taxes.

All that, along with the daily drumbeat of Trump tweets and headlines about investigations into his administration, led Austin, Texas, tech executive Gary Barrett to finally give up hope of ever turning a profit on an apartment he bought as an investment in a Trump tower in Las Vegas.

“People with enough cash to buy these units seem to be shying away from the Trump name,” says Barrett, calling it “the Trump effect.”

From golf fees and licensing deals to prices for Trump condos, many metrics used to gauge his business in the first two years of his presidency are down as the divisive comments and policies so beloved by his political base have turned off a group just as dear to him — the affluent who fuel his businesses. 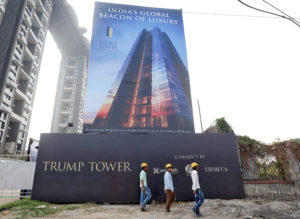 “He can be very polarizing. … The brand has been diminished,” says Jeff Lotman, CEO of licensing firm Global Icons. New York brand consultant Robert Passikoff puts it more bluntly: “The Trump brand has lost its mojo.”

Though it’s difficult to know just how badly Trump’s privately held businesses are hurting, Associated Press interviews with two dozen club members, condo buyers and real estate experts suggest the impact has been broad and sustained, with the same political divisions among voters playing out on the links and in clubhouses and condo board meetings.

The Trump Organization did not respond to repeated requests for comment but has said in the past its core operations are strong.

From the beginning, though, there were signs that mixing politics and business were backfiring. It started when Trump announced his candidacy in 2015, calling some Mexican immigrants crossing the border illegally “rapists,” and then snowballed the next year following the “Access Hollywood” tape of him boasting about grabbing women by the genitals.

Macy’s and Univision severed ties with his brand, mattress maker Serta stopped licensing his name, NASCAR and the PGA booked events that used to be held at his Doral resort in Miami elsewhere, and the TV network that aired his “Apprentice” — NBC — ended its relationship with him.

Then Trump blamed “both sides” at the neo-Nazi rally in Charlottesville, Virginia, in the summer of 2017, and more than a dozen charities and other organizations canceled galas and other parties at his Mar-a-Lago club in Florida. A hotel in the Soho section of Manhattan that had a licensing agreement to use his name took it off its building, following a decision by one in Toronto to do the same.

The revolt has extended to new Trump hotel ventures aimed at those who can’t afford $450 or more to stay at his big-city hotels. Early last year, the Trump Organization announced the rollout of two chains — one mid-priced, the other budget — and said it had signed letters of intent for possible deals with more than 20 developers.

Today, only one deal, in Mississippi, has been announced. Hotel experts say potential partners don’t want to deal with the controversy the Trump name brings.

“In today’s politically charged environment, everyone is cautious,” says Lee Hunter, CEO of consultancy Hunter Hotel Advisors in Atlanta. “You want as many guests staying with you as possible.”

Trump’s condos in New York have taken a hit, too.

An AP analysis of sales data from brokerage CityRealty shows prices per square foot have fallen in nine of the 11 Trump-branded buildings in Manhattan in the first 10 months this year after dropping last year, too. Since Trump has taken office, prices have fallen 9 percent on average and are now down to levels not seen in five years. In that time, Manhattan condos overall have risen 29 percent.

CityRealty consultant Zach Gutierrez says Trump buildings are suffering partly because they look dated next to all the new luxury buildings that have gone up in recent years. But he adds that it doesn’t help that some apartment hunters won’t even consider a Trump building now.

Ivanka Trump’s business has been hit by the political backlash, too. 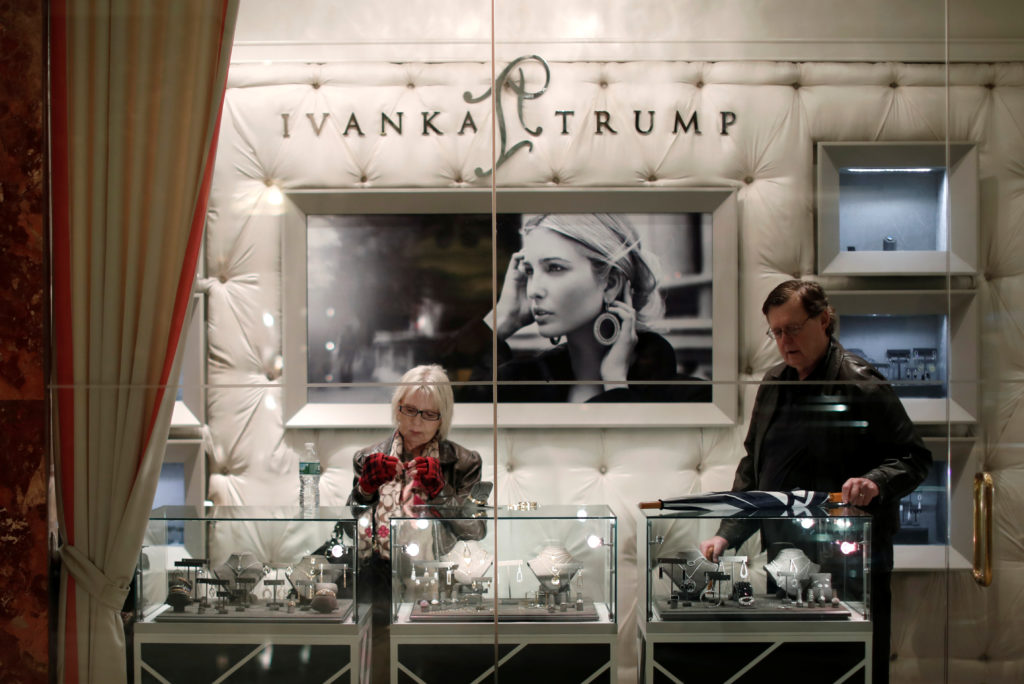 The president’s daughter shut down her company making dresses, shoes, handbags and other accessories in July after boycotts against her brand and after retailers such as Saks Fifth Avenue and Nordstrom decided to drop her line, the latter specifically citing weak sales. Her company said at the time that business was strong and that the shutdown was triggered by Ivanka’s desire to focus more on her work as a White House adviser.

Ivanka’s brother Eric Trump is similarly optimistic about his father’s 17 golf resorts around the world, telling the AP earlier this year that the clubs are doing “spectacularly.”

Financial reports released by the British and Irish governments in October show two Scottish resorts and one in Ireland lost millions last year, the fourth year in a row of losses. Revenue at his public course in the Bronx fell 9 percent in the first six months of this year, on top of a 7 percent drop for all of last year. Revenue from his Doral golf resort in Miami, which generates the bulk of Trump’s golf revenue, is estimated by Forbes magazine to have plunged 26 percent last year.

Another business facing trouble: Trump’s “condo-hotel” business, in which people looking for income buy hotel rooms in Trump hotels and hand them over to his company to rent out to guests.

“When I bought, it had to do with the Trump name. It was a respected name,” says Terry Gould, who sold two condos in his Trump’s Vegas tower last year out of frustration with what he says was the puny income from them. “I don’t know what the market sees in it now.”

The Washington Post says private documents it has seen show income to condo-hotel owners at a New York property dropped 14 percent from 2015 to 2017. The newspaper reported a similar drop at a Trump hotel in Chicago.

Previously, Donald Trump Jr. and his brother Eric have said that new limits their father has placed on his businesses, such as agreeing not to strike any new business overseas, have indeed slowed deal-making. But they said that might be the price to pay for their father being president.

To be sure, it hasn’t been all bad news. Trump’s businesses still hauled in at least $453 million in revenue last year, according to the president’s financial disclosure.

His Washington hotel, which took in $40 million of that, is doing a brisk business with Republican Party officials, lobbyists and business groups that can lose or win big on changes in regulations and laws.

Foreign diplomats and dignitaries and groups with ties to the governments of Turkey, Azerbaijan, Saudi Arabia, Kuwait, Bahrain and other countries have held events or stayed at the hotel, too. Referring to his decision to throw a party there in June, the Philippine ambassador wrote in a newspaper op-ed, “Since several other embassies have also held their national day celebrations at the Trump hotel which were well attended — I decided — why not do it there, too.”

The Trump Organization has promised to donate any profits tied to foreign governments to the U.S. Treasury to allay conflict-of-interest concerns, and made a payment of $151,470 to the agency earlier this year to cover 2017. The company has declined to provide details on how the figure was calculated.

Trump’s summer White House at his Bedminster, New Jersey, golf club — where he has spent 71 days of his presidency — is benefiting from political spending, too.

A group backing New Jersey Rep. Tom MacArthur’s re-election campaign spent more than $15,000 on rent and food for an event at the club, and fellow New Jersey Rep. Daryl Kipnis spent $8,000 the next year. Both lost in the midterms.

A group supporting the president’s 2020 re-election — Donald J. Trump for President Inc. — spent more than $50,000 at the club since he was elected, part of a $3 million spending spree by the group at Trump properties.

Tax dollars spent at Bedminster to put up and feed aides and other support staff for the president’s many stays have helped Trump’s company, too — a full tally of which has not been made public.

Then there is all the untapped opportunity abroad after the presidency. Since the election, an AP review of trademarks around the world shows the president has received approval for dozens of trademarks in China and other countries to set up new businesses and license products.

Larry Chiagouris, a marketing professor at Pace University, thinks Trump will move fast to make money off those trademarks after he leaves office, particularly in emerging markets where newly wealthy consumers are less concerned about his divisive comments and policies.

“He’ll go to work and put product underneath them and his business will be worth a lot more,” Chiagouris says.

Others are less optimistic.

Consultant Passikoff has been surveying consumer attitudes toward Trump for 30 years and says his data shows the brand was so popular at one point that Trump could get people to pay 30 percent more than they would for rival brands on hotel rooms, steak, bottles of vodka and other goods and services.