James Comey continued to defend his actions as FBI director during an hours-long meeting with two Congressional committees on Monday, the second closed-door meeting with members in as many weeks.

The former FBI director also told lawmakers that President Donald Trump’s attacks on the FBI puts the country at risk, according to a transcript of the meeting released Tuesday, because “there are millions of Americans walking around thinking that the FBI is corrupt and out to get the President of the United States” — something Comey characterized as a lie.

He made those comments before the two House committees as part of their investigation into possible bias in the Justice Department before Trump’s election. (Democrats have said there is no merit to the Republican-led probe.)

Comey’s statements echo what he told reporters as he emerged from Monday’s meeting on Capitol Hill: Republicans need “to have the courage to stand up and speak the truth, not be cowed by mean tweets or fear of their base.”

White House press secretary Sarah Huckabee Sanders on Monday urged Republicans to “stand up to Comey and his tremendous corruption.”

Republicans should stand up to Comey and his tremendous corruption – from the fake Hillary Clinton investigation, to lying and leaking, to FISA abuse, and a list too long to name. The President did the country a service by firing him and exposing him for the shameless fraud he is

Questions from lawmakers in the closed interview focused on Comey’s actions during the investigation into Secretary of State Hillary Clinton’s use of private email server during her time in office, along with the investigation into former national security adviser Michael Flynn, who left the White House after misleading officials about his contacts with Russia. Flynn pleaded guilty last year to lying about his conversation with Russians officials before Trump took office. He’s now cooperating with special counsel Robert Mueller’s investigation.

Read the full transcript by clicking below. 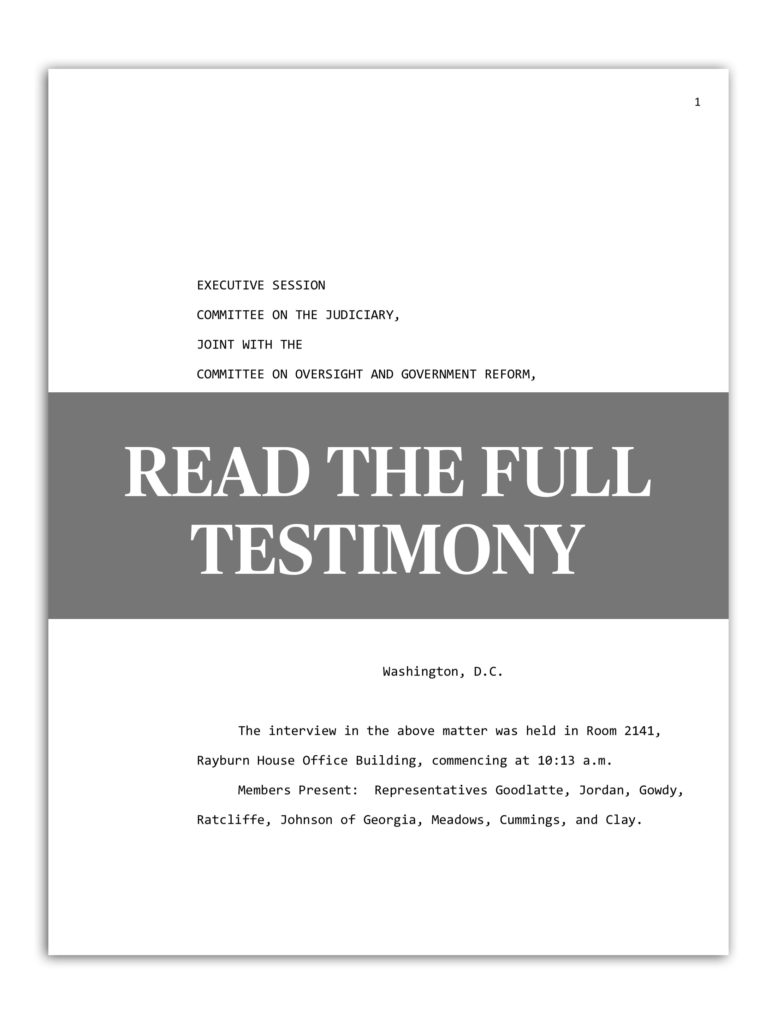 Left: Former FBI Director James Comey arrives to give closed-door testimony to the House Oversight and House Judiciary committees, as part of their probes into Comey's 2016 handling of the investigation into former Secretary of State Hillary Clinton's email use, on Dec. 17, 2018. Photo by Jonathan Ernst/Reuters.

With recent court filings, Mueller puts ‘cards on the table’