Read the full transcript below.

The extraordinary decision to release transcripts of Flynn’s calls with a foreign country’s ambassador, a closely guarded secret for more than three years, is part of an ongoing Trump administration effort to disclose information from the Russia investigation in hopes of painting Obama-era officials in a bad light and suggesting they acted improperly.

The transcripts of calls with Sergey Kislyak, the Russian ambassador at the time, provide opportunities for partisans on both sides to advance their perspectives of the investigation.

They appear to show, as prosecutors have alleged, that Flynn urged Kislyak to refrain from escalating tensions with the U.S. in response to newly imposed sanctions against Russia. Flynn pleaded guilty to lying to the FBI about that call.

But Republicans who maintain that Flynn was simply trying to avoid aggravating the situation with the Kremlin quickly pointed to the transcripts to say the calls were proper. Trump’s Justice Department dismissed the case this month, saying the FBI didn’t have a basis to question Flynn in the first place.

The documents were released Friday by Senate Republicans after being declassified by John Ratcliffe, a former Texas congressman and loyalist of President Donald Trump who was sworn into the job earlier this week.

Ratcliffe’s predecessor as intelligence director, Richard Grenell, this month declassified a list of names of intelligence and Obama administration officials who in late 2016 and early 2017 requested to see the identity of an American citizen that was concealed in classified intelligence reports. That name was revealed to be Flynn.

There is nothing unusual about that process, known as unmasking, and it’s been more prevalent at the beginning of the Trump administration than it was at the end of the Obama administration. But supporters of the president have suggested that the requests were made for political reasons.

The transcripts of calls with Sergey Kislyak, the Russian ambassador at the time, provide opportunities for partisans on both sides to advance their perspectives of the investigation. 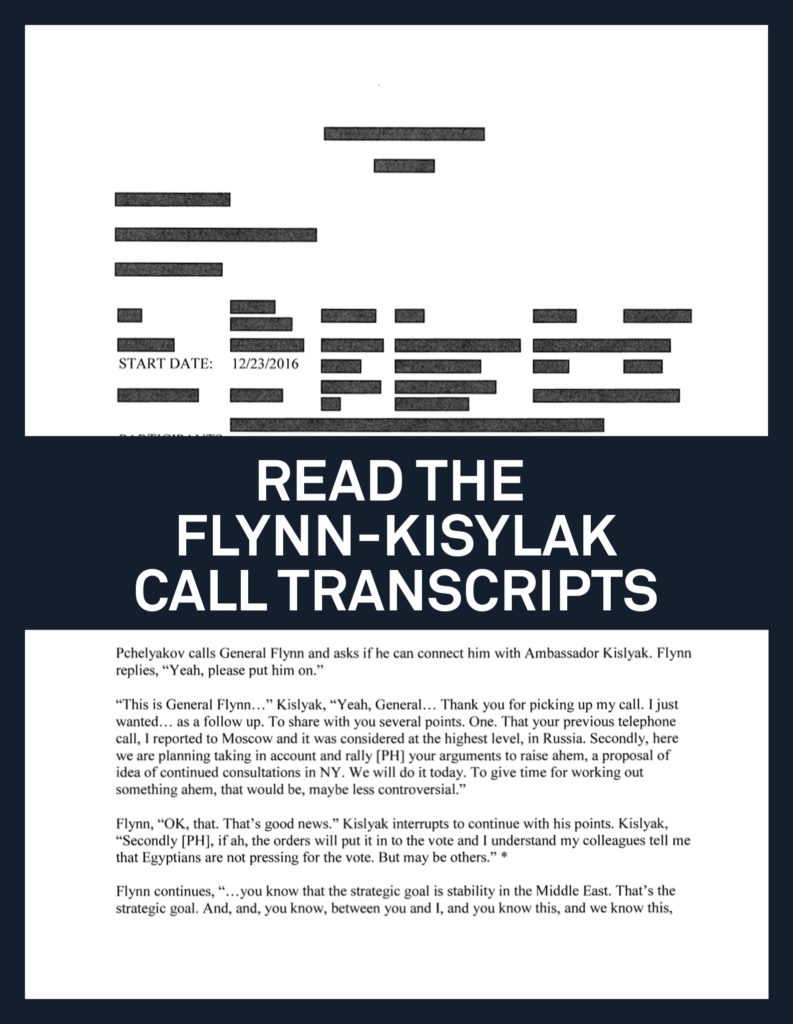 Left: Former national security adviser Michael Flynn exits a vehicle as he arrives for his sentencing hearing at U.S. District Court in Washington, on December 18, 2018. Photo by Jonathan Ernst/Reuters