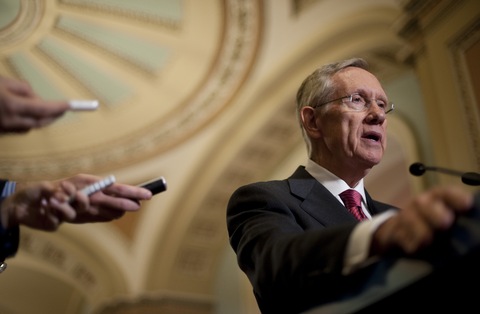 Senate Majority Leader Harry Reid says he can understand the pain of drivers sitting in bumper-to-bumper traffic while expending untold amounts of increasingly expensive gasoline. The Senate is debating a $109 billion bill that would revitalize highway rail and infrastructure programs. Reid and the Democrats say the measure would boost the economy and create jobs. The Nevada Democrat said Thursday he has a personal understanding of what’s happening on America’s roads.

“Several years ago my wife and I took a trip during Christmas and went to Southern California. I decided to do something different. We were going to drive back from San Diego area to Las Vegas and I haven’t done that in a long, long time. That was such an eye-opener to me,” Reid said. “The highway was so crowded. We came to a complete halt … eight or nine times. … Cars are idling using gas that they shouldn’t be using.”

As the Senate debated amendments to the measure, Republicans tried to embarrass President Obama with a vote on the XL Pipeline issue. The Senate voted 56-42 to defeat the GOP amendment, with at least 10 Senate Democrats voting against party lines to side with the Republicans.

Reid said the Senate is on track to pass the final bill by next Tuesday.

But it’s unclear what will happen to the House version of the bill. House Republicans are in an internal struggle over how to pay for a revised $260 billion plan. Many conservatives oppose the spending contained in the legislation, and there are simply not enough GOP votes to pass it. But House Speaker John Boehner signaled Thursday that he’s ready to scrap his chamber’s bill and move ahead with the Senate measure when it’s ready.

“The current plan is to see what the Senate can produce and to bring their bill up. In the meantime, we’re going to continue to have conversations with members about a longer term approach, that frankly our members want. But at this point in time, the plan is to bring up the Senate bill or something like it,” Boehner told reporters.

Both sides seem to agree there is no appetite for extending yet another funding deadline — the current transportation authorization measure expires March 31.

The House leaves Washington Friday for a week-long recess.