A bipartisan panel known as the Commission on Wartime Contracting in Iraq and Afghanistan sent its final report to Congress Wednesday, detailing at least $30 billion — and possibly as much as $60 billion — in wasteful spending during the course of the last decade, through payments to contractors, fraud, waste, lack of records and accounting and poor oversight over the disbursement of funds. 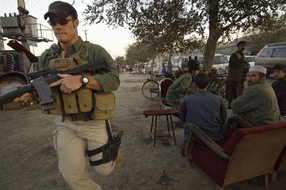 Further, the report warns that the situation could deepen with the United States’ planned phase-out in both countries and through their governments.

Two of the authors, Christopher Shays and Michael Thibault, wrote in an opinion piece in the Washington Post about their findings:

Our final report shows that the costs of contracting waste and fraud extend beyond the disservice to taxpayers. The costs include diminishing for U.S. military, diplomatic and development efforts; fostering corruption in host countries; and undermining U.S. standing and influence overseas.

They also emphasized the extensive use of contractors, which has surpassed 260,000 in some periods and even outnumbered U.S. military personnel, leading them to conclude that “[t]he United States cannot conduct large or prolonged military operations without contractor support.”

The Commission began its work at the behest of Congress in 2008. The Commission expires at the end of September. They examined spending in a variety of areas, including development projects, security and other supporting contractors.

A private security contractor runs along a sidewalk in Afghanistan, drawing stares from locals while providing security for a convoy in Kabul. Photo by Matt Moyer/Getty Images.