Report: Rise in jail deaths despite decrease in jail population

Almost a month after she was pulled over for a minor traffic violation, questions remain over the death of Sandra Bland, whose reported suicide in a Waller County, Texas, jail cell reopened a debate over police brutality, especially targeted at African Americans.

But despite the case’s high profile, Bland’s death was not rare.

Just last week, Raynette Turner died in her jail cell in Westchester County, hours before her arraignment on misdemeanor shoplifting charges. And over the past three months, four people have reportedly died while in custody at Denver’s Adams County jail.

A new report on mortality in jails and state prisons released today from the Department of Justice shows that in 2013, the most recent year numbers are available, 967 people died while in jail. The majority of jail deaths occurred within the first seven days a person was in police custody.

Nearly 34 percent of these deaths were suicides, and roughly 50 percent were related to natural causes like heart attack. The average person was a white male, 35 years or older.

“People incarcerated for the first time have a lot of racing thoughts on a lot of different things. The longer you’re there without any kind of contact … the more despondent you get.” — Lindsay Hayes, National Center on Institutions and Alternatives
These aren’t surprising stats when compared to past data. What is surprising, says Bureau of Labor statistician Margaret Noonan, is that although the jail population decreased by 4 percent since 2012, the number of deaths in jails increased by 1 percent.

Noonan says that suicide and heart attacks usually peak in the first few days a person is in police custody.

The health assessment for jailed inmates differs from those going into prison. While jails have a basic intake process, screening is not as in-depth as what you’d find in prison.

According to Lindsay Hayes, Project Director for the National Center on Institutions and Alternatives, isolation from the outside world and uncertainty for the future can be suicidal triggers for vulnerable first-time offenders.

“People incarcerated for the first time have a lot of racing thoughts on a lot of different things. The longer you’re there without any kind of contact … the more despondent you get,” Hayes said. 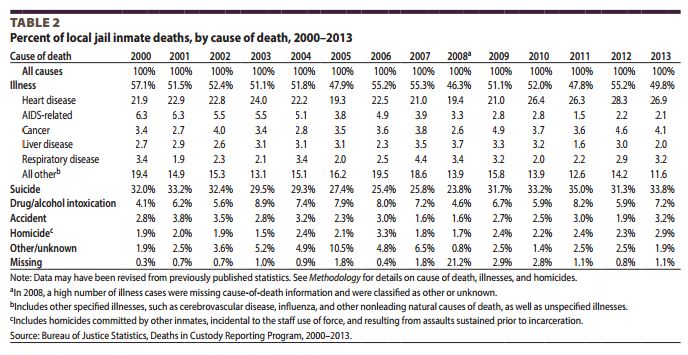 Courtesy of Bureau of Justice Statistics

In Bland’s case, it was reported that the 28-year-old had attempted suicide once before and had suffered from depression. Police said Turner had a history of high blood pressure. While in jail, she complained of feeling ill, was taken to the hospital, then was returned to her cell after vomiting in a holding area, according to reports.

Both of these instances are under investigation.

Hayes points out that Bland was placed in general population housing and was never referred to a mental health clinician despite revealing her history. While Bland had answered affirmative for history with suicide and depression, Hayes said jail staff focused on whether she was suicidal “right now.”

Noonan says that the jail population ebbs and flows, and some years it’s not uncommon to see a spike in deaths.

Left: A new report from the Bureau of Labor Statistics shows that in 2013, 967 people died while in jail. Photo by Lucy Nicholson/Reuters