WASHINGTON — Republican foes of President Barack Obama’s health care law may be able to get more by chipping away at it than trying to take the whole thing down at once.

That’s one lesson of the budget deal passed by Congress and signed by the president last week.

It delayed a widely criticized tax on high-cost employer health insurance plans that hasn’t taken effect yet. And it temporarily suspended two taxes on industry already being collected, which are also part of the health law.

In contrast to frontal attacks on “Obamacare” that have repeatedly failed, this tactic could well succeed. Delays and suspensions have a way of becoming permanent.

Polls show that the public remains deeply divided over the Affordable Care Act, or ACA. Opponents are already looking for other provisions that could be separated from the law. 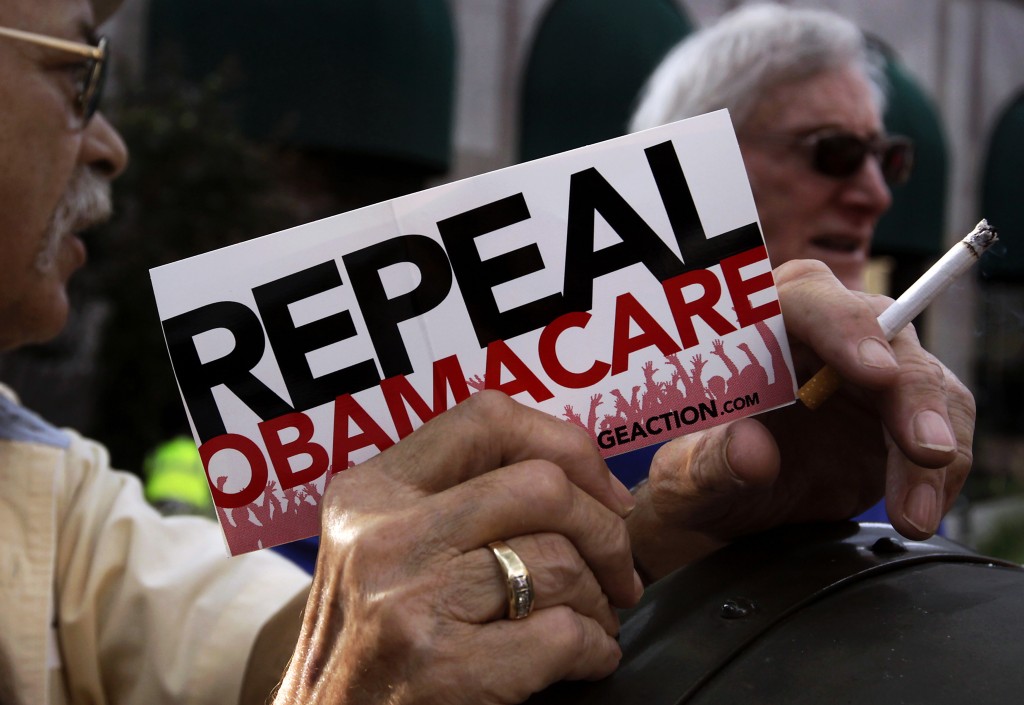 A small group of demonstrators protest against the Affordable Healthcare Act in 2013 in Indianapolis. Photo By Nate Chute/Reuters

Next could be the “employer mandate,” a requirement that larger companies offer coverage or risk fines. Part of the mandate is a controversial definition of a full-time worker as someone who averages 30 hours a week. Critics say it discourages companies from hiring full-time employees.

“Maybe Republicans have come to grips with the idea that the basic structure of the ACA has been in place long enough that simple repeal is not possible,” said economist Joe Antos of the American Enterprise Institute, a business-oriented think tank. Perhaps the budget deal “is practice” for more changes, he added.

Supporters of the health care law are trying to downplay the consequences of the budget deal as superficial dings. It did not touch coverage provisions that have reduced the nation’s uninsured rate to a historic low of 9 percent. Indeed, Obama himself announced that 6 million people have already signed up for 2016 coverage, with more than a month left in open-enrollment season.

“I think you can make too much of these particular things,” said economist Paul Van de Water of the Center on Budget and Policy Priorities, referring to the deal. “They don’t actually have any effect on the ACA’s coverage expansion. In that sense, it’s not a blow against the ACA at all.” The center advocates on behalf of low-income people.

Yet not too long ago a top White House adviser was vigorously defending the health law’s tax on high-cost coverage, known as the Cadillac tax.

The tax is 40 percent of the value of employer-sponsored plans that exceeds certain thresholds: $10,200 for individual coverage and $27,500 for family coverage. In its first year, 2018, it would have affected 26 percent of all employers and nearly half of larger companies, according to the nonpartisan Kaiser Family Foundation. Since the tax is indexed to general inflation, which rises more slowly than health insurance premiums, it would have affected a growing share of health plans over time.

Proponents of the tax, including many economists, see it as a much-needed brake on health care spending. But business and labor joined forces to oppose it. The budget deal delayed it two years, and its future is in doubt.

The spirited defense of the tax came from Jason Furman, chairman of the White House Council of Economic Advisers. “Repealing the tax or delaying its scheduled implementation … would have serious negative consequences for our health care system,” Furman warned in a speech Oct. 7.

Pulling back on cost controls in the health law would erode the wages of workers and add to government deficits, Furman explained, adding that “the administration opposes legislation that would repeal or delay this provision.”

Fast forward to a recent White House news briefing, when spokesman Josh Earnest seemed to soften that stance. While Earnest said the administration strongly opposed repealing the Cadillac tax, he didn’t address the notion of delaying it.

The health law’s employer mandate is the next likely focus for opponents, said Antos, the economist.

“The really large employers are not going to stop offering health insurance, since it’s an important benefit,” he said. “Even analysts on the left would agree that that mandate isn’t going to accomplish much.”

Similar to the Cadillac tax, the employer requirement raises concerns on both sides of the political divide. That could put the mandate into play when Congress again tackles a budget bill, or some other massive piece of legislation on which lots of trades get made behind closed doors.

The step-by-step approach has led to other health law changes. Among them:

Left: Supporters of the Affordable Care Act celebrate after the Supreme Court up held the law in the 6-3 vote at the Supreme Court in Washington June 25, 2015. More recently, Republicans have shifted tactics on the law, with attempts to use budgetary measures to install changes. Photo By Joshua Roberts/Reuters