What Republicans just changed in their health care bill

With the clock ticking and support stalling, Senate Republicans unveiled yet another Hail Mary on Monday in their effort to overhaul health care.

Republicans have until 11:59 p.m. Sept. 30 (the precise end of the fiscal year) to pass a health care bill using their ideal method: the “budget reconciliation” process, which allows some major legislation to pass with 50 votes, rather than the usual 60 required in the Senate.

This bill, Graham-Cassidy 2.0, is an effort to win over key holdouts on the original bill the senators unveiled 12 days ago. It has many of the same key features:

But overall, Republicans have changed their plan in two primary ways:

Four more rural states get a specific funding boost. Idaho, Nebraska, Nevada** and New Mexico benefit from a new section specifying that states with fewer than 30 people per mile should get a dedicated amount of the $25 billion fund states would use for health care from 2019 to 2020. They join Alaska*, Montana, North Dakota, South Dakota and Wyoming, which were considered “low-density” — with fewer than 15 people per mile — under the first draft of the bill.

Why that matters These nine states, which represented 3.2 percent of the U.S. population in 2010, would get more health care money than other states over the next two years. The latest version of the bill says they would get 5 percent of the initial $25 billion transition fund the government would create in lieu of federal tax credits and subsidies. The previous Graham-Cassidy bill did not specify this money by state.

Why? This draft gives a funding boost to “low-density” states which also have high per-capita health care costs (20 percent above average). That seems to be just those three states, when using Kaiser Family Foundation data.

Specifically, the bill gives increased federal matching funds to any state receiving a special poverty rating. There are just two: Alaska and Hawaii. Alaska would get a 25 percent increase in the federal (FMAP) formula for Medicaid and CHIP. Hawaii would get a 15 percent boost.

*A (likely unnecessary) reminder that Alaska Sen.Lisa Murkowski has been a key undecided Republican vote on health care.
**Nevada Sen. Dean Heller is a co-sponsor of the Graham-Cassidy bill and considered the most vulnerable Republican in the chamber next year. 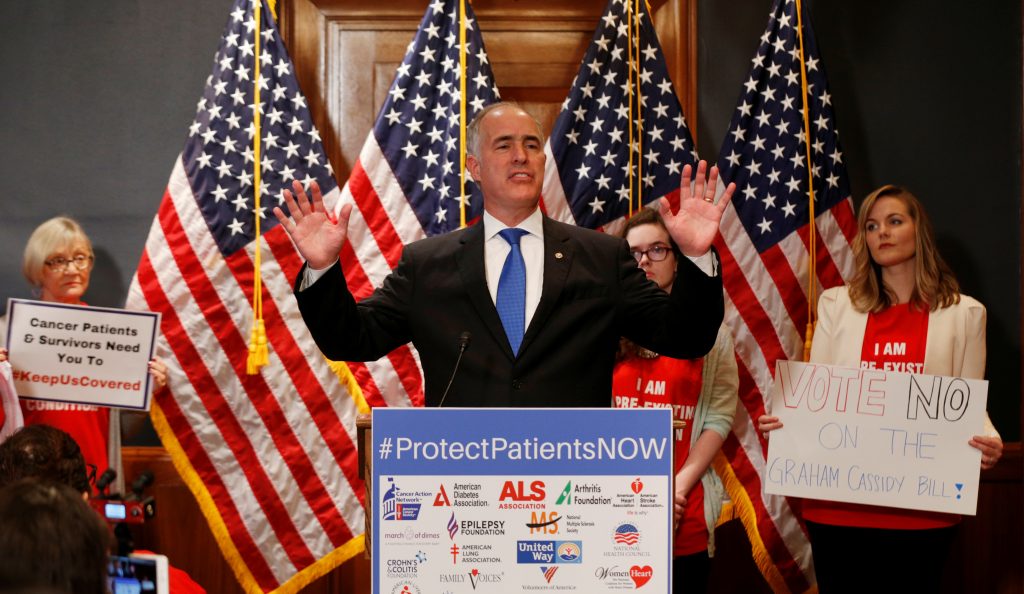 2.Most Affordable Care Act requirements are easier for states to waive or ignore.

What has changed: The last section of the revised bill gives states broader power by pointing to “the following rules, which shall be established by the State.” Those rules include whether insurers can charge different rates for similar people and whether plans must keep certain benefits. This language also implies that states can reinstate lifetime caps on coverage, can allow insurers to charge for preventative care and can allow larger increases in deductibles and premiums.

What it means: This could allow for lower-cost plans, and more of them, for the healthy, but higher-cost plans for those with a history of illness.

Pre-existing condition protections also have a specific word change that may make changing them easier.

Now, the language about waivers is gone in that section. States instead must submit a description of “how the State shall maintain access to adequate and affordable health insurance coverage for individuals with pre-existing conditions.”

Who must be protected from premium hikes? The bill now includes protection based on sex and genetic information, rather than on Constitutional classes.

What that means: This draft specifically bans insurers from raising premiums based on two things: sex and genetic information. The last Graham-Cassidy draft banned premium increases based on “sex or membership in a protected class under the Constitution of 16 the United States.” The latter category has been deleted.