Republicans have seized on the recent increase in asylum seekers at the Southern border to reframe the immigration debate in Congress around border security instead of more sweeping reform, forcing Democrats to play defense on an issue that could dominate the 2022 midterm elections.

Seasonal increases in border crossings are not new, but the number of arrivals at the U.S.-Mexico border has grown every month since April 2020. Nearly 100,000 immigrants were detained along the border in February, the highest monthly number since the last major spike in migrant arrivals in 2019. They included thousands of unaccompanied children, who pose challenges for a system designed to process single adult men.

Republicans claim the large number of people seeking entry into the country from Mexico is a direct result of President Joe Biden’s decision to end policies put in place by his predecessor to stop illegal migration to the United States.

Republicans have also insisted Congress should not consider broader changes to the nation’s immigration system until the Biden administration strengthens security at the border.

“We cannot possibly pass any legalization legislation until we regain control of the border,” Sen. Lindsey Graham, a leading GOP voice on immigration, said at a news conference Wednesday where he unveiled new legislation aimed at boosting border security.

The view echoed other Republicans who have turned border security into a major sticking point in early talks over immigration reform. In focusing on the situation at the border, Republicans have sought to reframe the immigration debate under Biden by linking reform efforts to border security — something left-leaning advocates had hoped to avoid by pressing for legislation that didn’t include stricter enforcement measures.

House Democrats passed two bills last week that would offer a pathway to citizenship or other legal protections to millions of undocumented immigrants, including farm workers and younger immigrants known as Dreamers. Support from Republicans now seems unlikely, unless the White House and Democrats agree to Republican demands for more border enforcement.

“In the past, Republicans have been willing to consider [immigration reform] legislation if it’s coupled with border security. If that’s not even in a bill, I don’t see how you get the necessary Republican numbers,” said Lora Ries, a senior research fellow and immigration expert at the conservative Heritage Foundation.

“The border crisis is certainly an aggravating factor for Democrats getting the necessary votes” to pass legislation, she added. 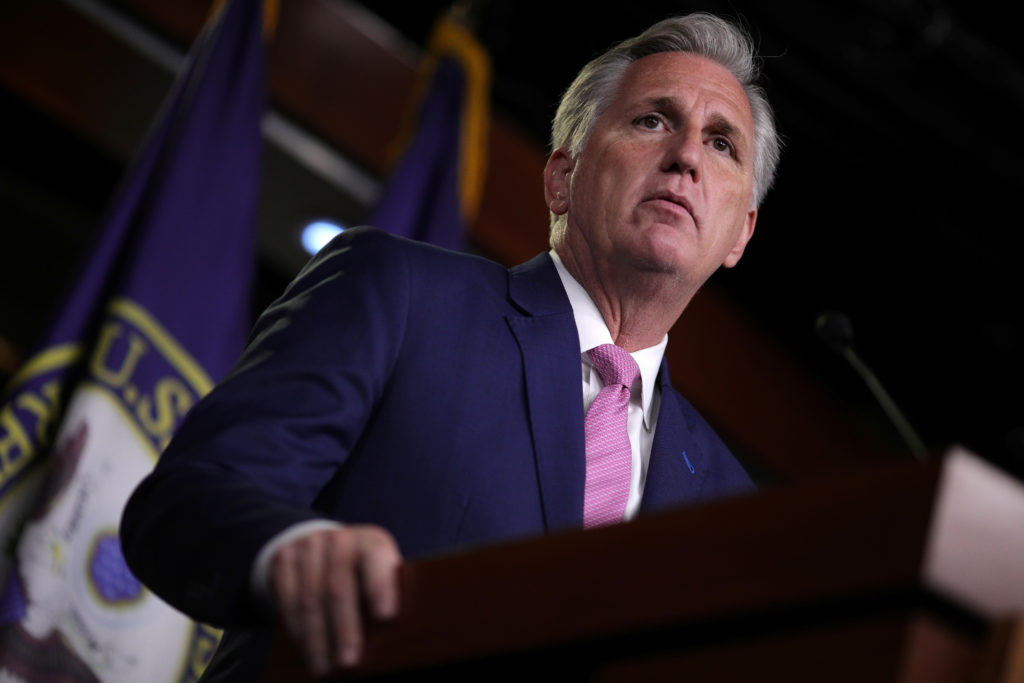 Beyond the current legislative fight, Republicans have used this moment to start building the party’s messaging for next year’s elections.

The 2022 midterms are still more than 19 months away. But Republican lawmakers and outside conservative groups have already signaled immigration will be a key focus in their bid to retake control of the House, where Democrats hold a slim majority, and the evenly split, 50-50 Senate, where Vice President Kamala Harris holds the tie-breaking vote. Biden’s agenda depends on Democrats’ maintaining control of both chambers of Congress.

House Minority Leader Kevin McCarthy, R-Calif., used similar language in blaming Biden for the “border crisis” after leading a House Republican delegation on a visit to a border facility in Texas earlier this month.

Republicans have called on Biden to reinstate several Trump era policies that he rolled back shortly after taking office, including the so-called “Remain in Mexico” rule that required asylum seekers to wait in Mexico while their claims were processed in U.S. courts.

“Biden wants to dismantle everything Trump did, anything that has to do with border security,” said Betty Cardenas, the chairwoman of the Republican National Hispanic Assembly. “Let’s just be honest here. Biden did send a clear message to [immigrants] to come to our border.”

Some immigration experts attribute the recent increase in arrivals at the border to Biden’s decision to end many Trump administration rules aimed at limiting legal and illegal immigration as much as possible.

READ MORE: Democrats under pressure to act alone on immigration if Senate Republicans don’t sign on

Biden defended his administration’s response during his first presidential press conference Thursday, arguing that the increase in migrant arrivals at the border was part of an annual trend.

“There is a significant increase in the number of people coming to the border in the winter months of January, February, March. It happens every year,” Biden said.

Biden said his administration was working to connect unaccompanied children with family members in the United States as quickly as possible, and noted that the “vast majority” of people crossing the border were being sent back, including many who were single adults. 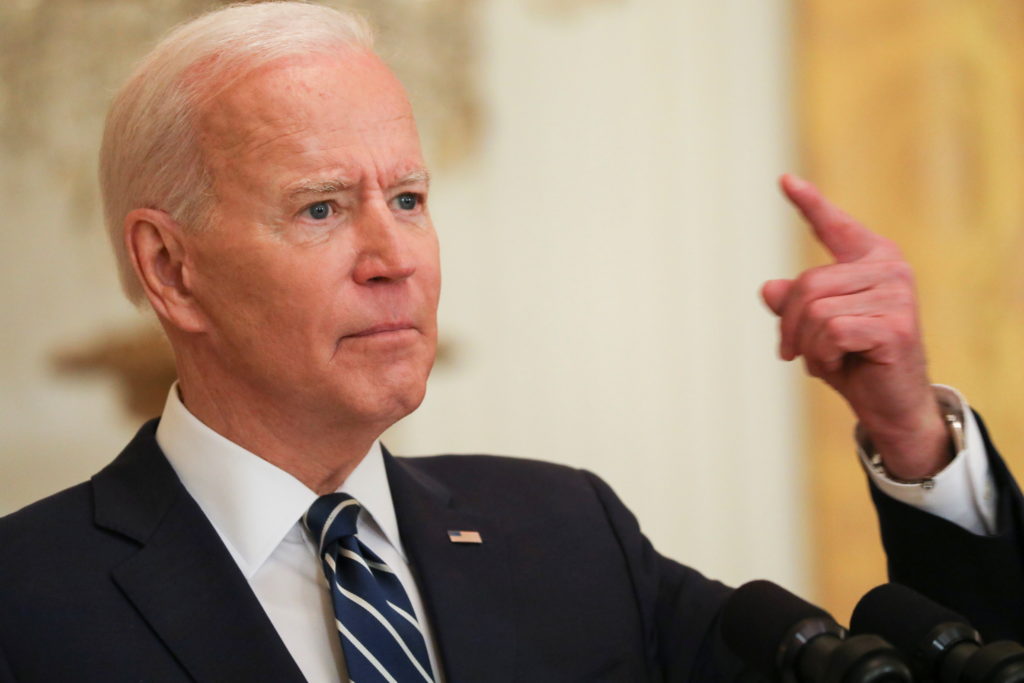 President Joe Biden gestures as he answers a question during his first formal news conference as president in the East Room of the White House in Washington on March 25, 2021. Photo by Leah Millis/REUTERS

The president also pinned some of the blame for the overcrowded conditions at the border on Trump, saying the previous administration cut funding for beds at processing centers that could have helped handle the current influx of arrivals.

“What we’re attempting to do right now is rebuild. Rebuild the system,” Biden said.

Some Republicans have offered an alternative approach, by signaling they would be willing to support a bipartisan immigration overhaul that would provide a pathway to citizenship for most of the undocumented immigrant population already living in the U.S.

Rep. Maria Salazar, R-Fla., floated a proposal earlier this month to grant legal status to millions of undocumented immigrants provided they pass a criminal background check, pay back taxes, and meet other criteria.

But so far the plan has not garnered widespread support among Republicans, and even those who backed it said the legislation could only work if Biden approves stricter border enforcement measures first.

Refusing to compromise with Democrats and sticking by Trump may be the smarter strategy for Republicans in 2022, immigration experts said, even though it runs counter to the conventional wisdom held by many Democrats that Trump alienated Latinos with xenophobic policies and rhetoric.

His performance in both elections showed Republican candidates who support restrictive immigration laws can still appeal to right-leaning Latino voters, said Sergio Arellano, who served on the 2020 Trump campaign’s Latinos for Trump advisory board.

“It’s not just about immigration,” said Arellano, a small business owner who is active in Arizona Republican politics. “Immigration is fourth or fifth on the list of priorities for the Latino community,” he added, after the economy, education, and other issues.

By focusing on the economy first and foremost, “Trump showed there was another path” for the party in attracting Latino voters, said Cadava, the author of “The Hispanic Republican: The Shaping of an American Political Identity, from Nixon to Trump.”

At the same time, Cadava said, “the Latino share of the electorate is growing every cycle, and I don’t think that consistently winning a third of the Latino vote is something Republicans should be particularly excited about.”

Republicans would be wise to follow Trump’s playbook on immigration, at least in the midterms next year, said Ries of the Heritage Foundation. “If they move away from the policies under the Trump administration, I do think it’s a risk for Republicans,” Ries said.

The current problems at the border offer a stark warning for Democrats as well, Graham said.

“You’re going to see Democrats up [for reelection] in 2022 having to pick between defending the indefensible or breaking with Biden” if the spike in asylum seekers continues, Graham said. He added, “this is becoming the most dominant issue of the 2022 election cycle.”