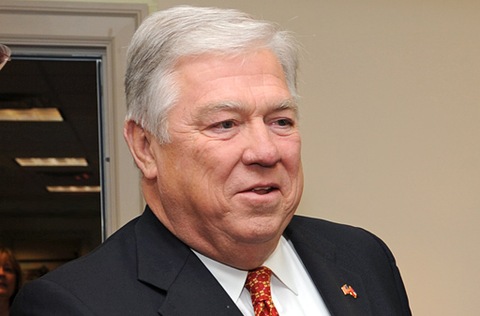 Mississippi Gov. Haley Barbour said Wednesday that Democrats are running from President Obama “like scalded* dogs,” worried that his sagging poll numbers might bring down their campaigns this election year.

“If you look at when he goes somewhere, the real question is, is the Democratic candidate for governor going to show up or you know, is he going to have a root canal that day so he can get out of going?” quipped Barbour at a breakfast with reporters sponsored by the Christian Science Monitor.

Asked whether Republican leaders such as Newt Gingrich and Sarah Palin are whipping up anti-Muslim feelings in the country, Barbour responded, “I don’t see it.” But he also urged Republicans not to lose sight of what matters to voters. “Any issue that takes people’s eye off unemployment, job creation, economic growth, taxes, spending, deficits, debts is taking their eye off the ball. That’s what the American people are concerned about,” he said.

Still, reporters pressed Barbour on a number of hot-button social issues, including a Florida church’s plans to burn copies of the Quran on the anniversary of the 9/11 attacks. “I do not think well of the idea of burning anybody’s Quran or Bible or Book of Mormon or anything else. I don’t think there’s any excuse for it,” Barbour said.

On another question about religion and the polls showing nearly a fifth of Americans believe President Obama is a Muslim, Barbour said, “I don’t know why people think what they think.” After a brief pause, he added, “This is a president we know less about than any other president in history.” The Mississippi governor did say he accepts “totally at face value” that the president is a Christian and that was “good enough” for him.

Returning to this year’s midterm elections, Barbour, who chairs the Republican Governors Association, acknowledged the Republican National Committee would not be in a position to spend as much money on voter turnout efforts as they have in the past. The RNC has struggled in its fundraising efforts under Chairman Michael Steele, lagging behind the other GOP campaign committees. Barbour estimated the RNC was short about $10 million, forcing the RGA to redirect funds into the party’s get-out-the-vote effort. “We have taken that into consideration to try and be sure we have a good ground game in the states where we think it matters, which is everywhere,” he said.

Looking past November, Barbour repeatedly deflected questions about whether he planned to launch a campaign for president in 2012, saying he was focused on electing governors. “I haven’t given that the least bit of thought,” he said.

When asked how his diet was going, since he previously told reporters if they saw him losing weight it could be a sign he was running, Barbour took the bait. “Went to Morton’s last night,” Barbour declared, noting the steakhouse has “a great diet kitchen” as the room filled with laughter.