HOMEWOOD, Ala. — A firebrand Alabama jurist wrested a U.S. Senate nomination from an appointed incumbent backed by millions of dollars from national Republicans, adding a new chapter Tuesday to an era of outsider politics that ushered Donald Trump into the White House yet leaves his presidency and his party in disarray.

Roy Moore’s 9-point victory over Sen. Luther Strange, backed by the White House and Republican leaders on Capitol Hill, ranks as a miscalculation and temporary embarrassment for the president; it’s a more consequential rebuke for Senate Majority Leader Mitch McConnell, who Moore said should step aside as GOP floor chief.

The Kentucky Republican already is struggling to capitalize on his narrow 52-48 majority. He failed this week to deliver a long-promised health care overhaul, with equally perilous fights looming on taxes, the budget, immigration and the nation’s credit limit. Now, McConnell may also face a 2018 midterm election cycle complicated by GOP primary challengers who, like Moore, make the Senate leader an albatross for establishment candidates, including incumbents Dean Heller of Nevada and Jeff Flake of Arizona.

Moore, the famed “Ten Commandments judge” twice removed from elected judicial office for defying federal courts, declared his nomination a message to Washington leaders “that their wall has been cracked and will now fall,” though he excepted the president from his ire. “Together we can make America great,” he said, echoing Trump’s campaign slogan.

“Who is sovereign, the people or the money? Alabama answered today.”

In Mississippi, state lawmaker Chris McDaniel, who nearly defeated Sen. Thad Cochran in 2014, called Moore’s win an “incredibly inspiring” blueprint that leaves him on the cusp of challenging Sen. Roger Wicker in 2018. “We know Mitch McConnell was rejected tonight — and Roger Wicker is just another part of Mitch McConnell’s leadership apparatus,” McDaniel told The Associated Press, saying he expects conservative challengers to emerge in other states, as well.

Trump and McConnell quickly closed ranks behind Moore after Strange conceded, underscoring their desire to keep the seat in Republican hands. Trump tweeted congratulations to Moore after the win. “Luther Strange started way back & ran a good race. Roy, WIN in Dec!” he said 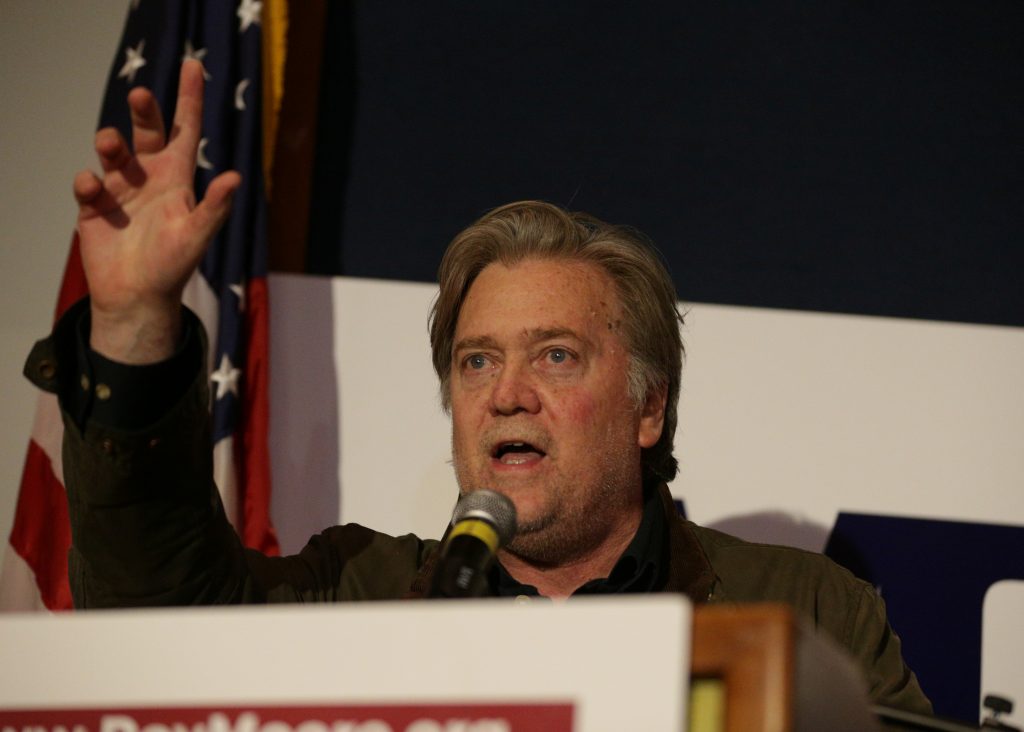 Steve Bannon speaks to the crowd prior to Republican candidate Roy Moore greeting the crowd of supporters after defeating incumbent Luther Strange to his supporters at the RSA Activity center in Montgomery, Alabama, U.S. September 26, 2017, during the runoff election for the Republican nomination for Alabama’s U.S. Senate seat vacated by Attorney General Jeff Sessions. REUTERS/Marvin Gentry

A West Point graduate and Vietnam veteran, Moore now is the favorite over Democrat Doug Jones in a Dec. 12 special election, though Republicans quietly worry the sometimes controversial Moore could yield an uncomfortably close race to fill the seat previously held by Attorney General Jeff Sessions.

Trump, meanwhile, must reconcile being the president who promised to “drain the swamp” yet endorsed and campaigned alongside Strange, 64, a lobbyist-turned-politician, in lieu of Moore, a 70-year-old figure steeped in anti-establishment fervor. Adding intrigue was the fact that Strange got his Senate post by being promoted from his job as Alabama attorney general by a now-convicted former governor whom Strange’s office had been investigating for corruption.

Trump’s choice left him opposite from his campaign architect and departed White House adviser Steve Bannon, who campaigned for Moore and introduced the nominee to his supporters Tuesday night as revelers watched returns showing Moore victorious in 63 of Alabama’s 67 counties.

Bannon cast Moore’s romp as a win for Trump, regardless of the president’s Strange endorsement. “Who is sovereign, the people or the money? Alabama answered today,” Bannon said.

“We’re dealing with a political environment that I’ve never had any experience with.”

And it’s worth noting that Trump turned his trip to Alabama last week into a national spectacle having nothing to do with Strange or Moore, as the president blasted professional athletes who protest during the national anthem. The fallout cemented Trump’s bond with his core supporters and raised questions about how interested Trump really was in the Alabama race. 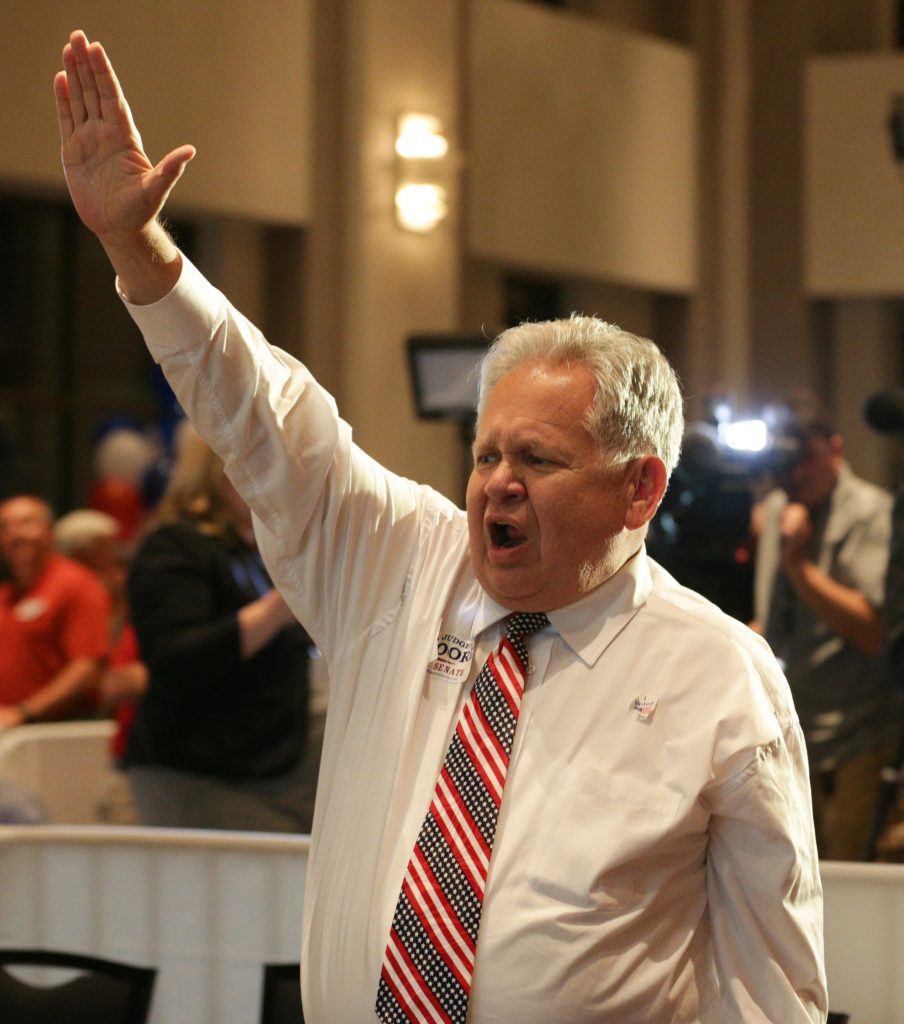 Elsewhere in Republican ranks, there are warnings not to make the Alabama results more than one state’s choice.

Republican pollster Whit Ayres, who has worked for Senate campaigns across the country, said Trump learns the same lesson his predecessor, Barack Obama, learned watching Democrats lose control of Congress and then seeing Trump defeat his chosen successor, Hillary Clinton. “You can’t just transfer the popularity of your brand to another candidate,” Ayres said.

As for Strange, Ayres noted the freshman senator was facing voters for the first time since being appointed by a governor who eventually resigned in disgrace. “No other Republican Senate incumbent will carry that baggage,” Ayres said.

In defeat, Strange did not directly confront those variables, telling a subdued crowd in suburban Birmingham he was proud of his team’s effort and grateful both to Trump and his Senate colleagues, but befuddled by the campaign he’d just concluded.

“We’re dealing with a political environment that I’ve never had any experience with,” Strange said. “The political seas and winds in this country right now … are very hard to navigate, very hard to understand.”