Rubio finally makes move on Trump, but is it too late?

WASHINGTON — Marco Rubio unleashed a campaign’s worth of harsh criticism on Donald Trump in the final Republican debate before Tuesday’s crucial primaries.

The problem may be that it took 10 debates and three Trump victories to get Rubio fired up.

Rubio, along with most of the other GOP presidential candidates, has treated Trump with kid-gloves for months, tiptoeing around glaring questions about the real estate mogul’s business record, political ideology, brash temperament and ambiguous policy proposals.

Only now, with Trump threatening to pull away from the field, did Rubio aggressively try to dismantle the billionaire businessman’s grip on the Republican race, with occasional help from Texas Sen. Ted Cruz.

Rubio accused Trump of shifting his position on deportation and staffing his hotels and other businesses with foreign workers instead of Americans. He also punched holes in the real estate mogul’s vague proposal for replacing President Barack Obama’s health care law.

The senator also gleefully pointed out Trump’s propensity for repeating talking points over and over again, the same criticism that tripped up Rubio in a debate earlier this month.

Rubio’s assertive posture was sure to be cheered by the crush of Republican officials who have rallied around his campaign in recent days, desperate for the senator to become a viable alternative to Trump. But privately, many were likely wondering why it took so long for Rubio to make his move — and whether his strong showing came too late.

Next week’s Super Tuesday contests mark the biggest single-day delegate haul of the nomination contests. A strong showing by Trump could put the nomination within his grasp, raising the stakes for his rivals to stop him.

Rubio was sometimes joined by Cruz in tag-team attacks on Trump. It was a tactical shift for two senators who had trained their fire on each other in recent weeks, both betting that the best strategy was to clear the field of other rivals before moving on to Trump. 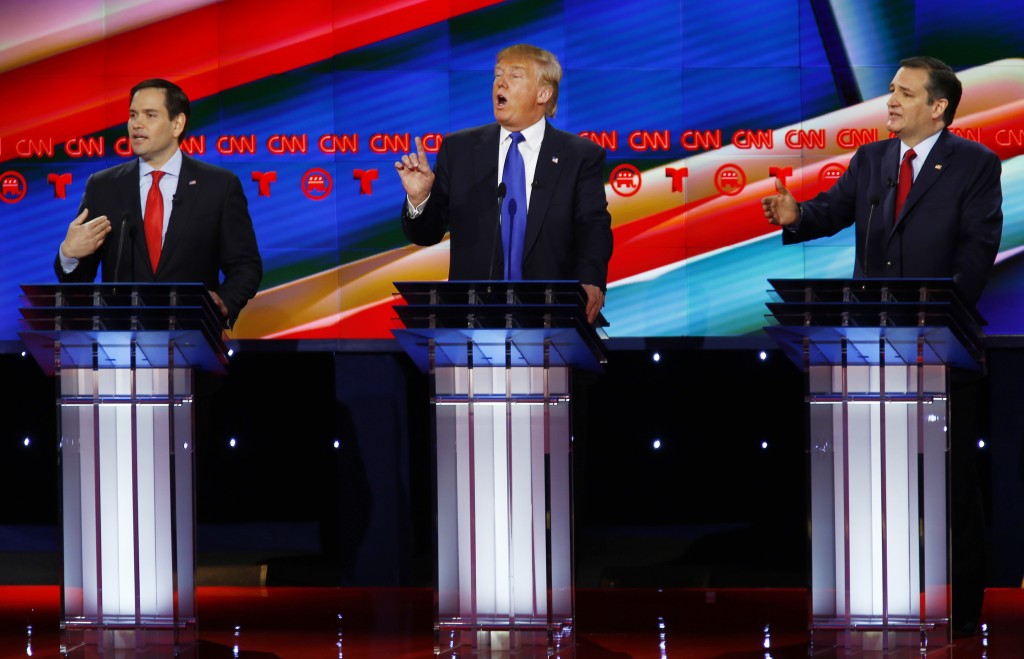 But Tuesday’s Nevada caucuses clearly changed their calculus. Trump dominated that contest, beating second-place Rubio by more than 20 points, and pulling ahead significantly in the early delegate count after victories in South Carolina and New Hampshire as well.

Trump appeared rattled at times as he faced the most sustained, face-to-face attacks of the campaign. Before Thursday, only Jeb Bush had made a real effort to tangle with Trump on the debate stage, though it did little to help the former Florida governor. Bush ended his campaign last week after disappointing showings in early primaries and a fundraising drought.

Rubio appeared to have taken lessons from Bush’s exchanges with Trump. The senator was prepared for Trump’s frequent habit of interrupting and almost willfully refused to back down when the businessman tried to talk over him. He also took a page out of Trump’s own playbook, lacing his more substantive critiques with some sharply personal attacks.

During a particularly biting exchange, Rubio said that if Trump hadn’t inherited family money, he would be “selling watches in Manhattan.”

Trump punched back with trademark insults.

After Rubio criticized his hiring practices, the businessman said, “You haven’t hired one person, you liar.” And when Cruz challenged Trump’s conservative credentials by suggesting he’s been too cozy with Democrats, the front-runner ripped the senator for being loathed by many of his Senate colleagues.

“You get along with nobody,” Trump said. “You should be ashamed of yourself.”

At times, the three-way fight between Trump, Rubio and Cruz devolved into a shouting match, with each struggling to be heard, let alone make a substantive policy point. The debate moderators were virtually helpless, as were the two other candidates on stage, John Kasich and Ben Carson.

For Rubio, the squabbling was a long way from the uplifting calls for a generational change in American politics and heavy focus on his family’s moving immigrant story that have been the cornerstone of his campaign. Those were the messages that have set Democrats on edge about the prospect of their eventual nominee, likely Hillary Clinton, facing the telegenic, 44-year-old Cuban-American in the general election.

Rubio’s next challenge — beyond topping Trump in at least some of the upcoming primaries — will be infusing that more optimistic message into his critique of Trump. He’s also likely to face the full force of Trump’s attacks for the first time in the campaign.

Even before the debate was over, Trump suggested he was eager to keep up the fight.

Left: Journalists in the media filing center watch as Donald Trump reacts to criticism from rival Marco Rubio criticizing his hiring of foreign workers during the debate sponsored by CNN for the 2016 Republican U.S. presidential candidates in Houston, Texas. Photo by Richard Carson/Reuters