WASHINGTON — Lawmakers heading the Senate intelligence committee focused squarely on Russia as they opened a hearing Thursday on attempts at undermining the 2016 U.S. presidential election.

Earlier Thursday, Putin again dismissed what he called “endless and groundless” accusations of Russian meddling in the U.S. election, describing them as part of the U.S. domestic political struggle. He also said he is ready to meet with President Donald Trump at an upcoming arctic summit.

The hearing Thursday is to address how the Kremlin allegedly uses technology to spread disinformation in the U.S. and Europe. Warner and the panel’s chairman, Sen. Richard Burr, R-N.C., provided an update Wednesday of the committee’s investigation into activities Russia might have taken to alter or influence the 2016 elections and whether there were any campaign contacts with Russian government officials that might have interfered with the election process. 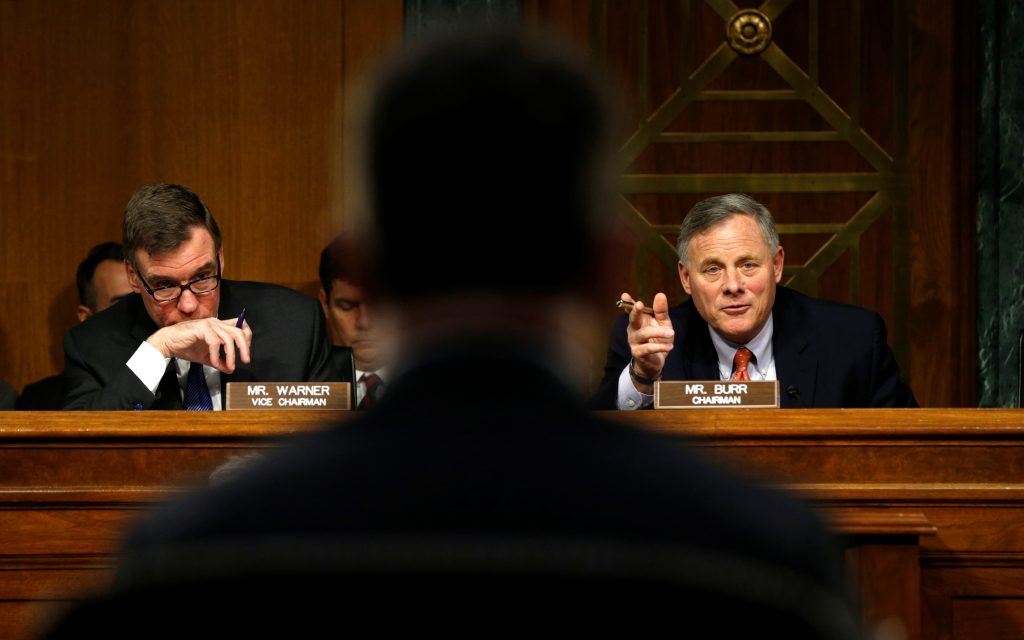 “There were upwards of 1,000 paid internet trolls working out of a facility in Russia, in effect, taking over series of computers, which is then called a botnet,” Warner told reporters on Capitol Hill Wednesday.

Warner said the committee is investigating to find out whether voters in key states, such as Wisconsin, Michigan and Pennsylvania, might have been served up Russian-generated fake news and propaganda along with information from their traditional news outlets.

“We are in a whole new realm around cyber that provides opportunity for huge, huge threats to our basic democracy,” Warner said. “You are seeing it right now.”

Burr added that Russians are trying to influence elections in Europe as well.

“I think it’s safe by everybody’s judgment that the Russians are actively involved in the French elections,” Burr said. The first round of the French presidential election is to be held next month.

Pledging cooperation, Burr and Warner said they would steer clear of politics in their panel’s probe of Russian meddling. They made a point of putting themselves at arm’s length from the House investigation that has been marked by partisanship and disputes.

Democrats have called for House intelligence committee Chairman Rep. Devin Nunes to recuse himself because of his ties to the Trump team, especially because the investigation includes looking at contacts that Russians had with President Donald Trump’s associates. Nunes, R-Calif., met with a secret source on the White House grounds last week to review classified material, which he says indicates that Trump associates’ communications were captured in “incidental” surveillance of foreigners. Nunes says he sees no reason to step aside.

Burr said that so far, the Senate committee has requested 20 individuals to be interviewed. Five have been scheduled, and the remaining 15 are likely to be scheduled within the next 10 days. Additional witnesses could also be interviewed.

Burr identified just one of the witnesses: Trump’s son-in-law, Jared Kushner. The White House has said that Kushner, a senior adviser to Trump, has volunteered to answer questions about arranging meetings with the Russian ambassador and other officials.

Asked whether the committee had spoken to former national security adviser Michael Flynn or his representatives, Burr told reporters, “It’s safe to say that we have had conversations with a lot of people, and you would think less of us if Gen. Flynn wasn’t in that list.”

An attorney for Flynn said his client had not yet been interviewed by the Senate committee. One of Flynn’s lawyers, Robert Kelner, said they have had discussions with committee staff members, but Flynn has not been contacted directly.

Trump asked Flynn, a former director of the Defense Intelligence Agency, to step down last month from his post as national security adviser. The president said he made the decision because Flynn had misled Vice President Mike Pence and other White House officials about his conversations with Russia’s ambassador to the U.S.