Ryan all but concedes Clinton will be president 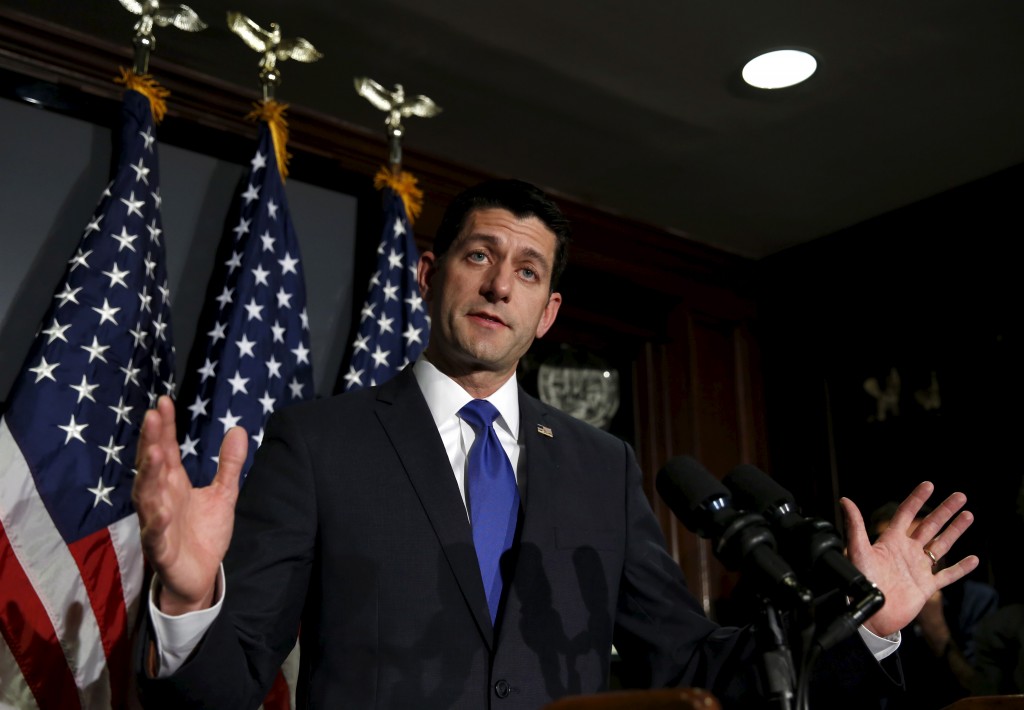 WASHINGTON — The nation’s most powerful Republican told his party Monday he now is focusing on ensuring Hillary Clinton doesn’t get a blank check as president with a Democratic-controlled Congress, suggesting he doesn’t believe Donald Trump can win the election.

House Speaker Paul Ryan’s office quickly said he was not conceding the election’s outcome. But pro-Trump GOP House members got that impression, pushing back and saying Trump can still prevail and should not be abandoned. One outspoken conservative called Ryan and other Republican leaders “cowards.”

A person who was on Ryan’s conference call with GOP lawmakers said the speaker declared that he will “spend his entire energy making sure that Hillary Clinton does not get a blank check with a Democrat-controlled Congress.” The person wasn’t authorized to be quoted by name and demanded anonymity.

Ryan said he wouldn’t defend Trump or appear with the Republican presidential candidate for the rest of the campaign, according to lawmakers and Republican congressional staff, who also spoke on condition of anonymity.

The remarkable development came as Trump battled to rescue his campaign after the release last week of a 2005 video in which he is heard bragging about how his fame allowed him to “do anything” to women. Several leading Republicans have withdrawn their support or even called for him to drop out of the race.

Several people on the call said Ryan explicitly told House members, “You all need to do what’s best for you in your district.”

Ryan said he was “willing to endure political pressure to help protect our majority,” a person on the call said.

Ryan’s message appeared to signal his disbelief in Trump’s ability to turn the campaign around with four weeks until Election Day, though he didn’t actually revoke his endorsement. He said his decision was driven by what he thought was best for the Republican-led Congress, not himself, according to people on the call.

In the eyes of many Republican leaders, the recently released tape of a 2005 conversation in which Trump made vulgar, predatory comments about women not only jeopardized his own uphill candidacy but that of Republicans fighting to hold their majority in the Senate. Their commanding majority in the House could now be in peril, too.

Some conservatives expressed alarm with Ryan’s tone, according to those on the call.

Questioned at Sunday’s debate about his vulgar remarks, Trump turned his fire on the Democrats. He accused Bill Clinton of having been “abusive to women” and said Hillary Clinton went after those women “viciously.” He declared the Democratic nominee had “tremendous hate in her heart” and should be in jail.

“Anything to avoid talking about your campaign and the way it’s exploding,” Clinton countered.

Trump got backing Monday from his running mate, Indiana Gov. Mike Pence, who gave a series of television interviews, urging Republicans to stand behind Trump.

“This is a choice between two futures,” Pence declared, saying he never considered leaving Trump’s ticket.

“I’m honored to be standing with him,” Pence said.

For voters appalled by Trump’s words, the businessman’s debate performance likely did little to ease their concerns. He denied he had kissed and groped women without their consent, dismissing his claims that he had as “locker room” talk.

Clinton on Monday tweeted: “If Trump stands by what he said about women as ‘locker room talk,’ he’s clearly not sorry.”

Trump’s intensely loyal supporters might well be energized by his vigorous criticism of Clinton. He labeled her “the devil” and promised she would “be in jail” if he were president because of her email practices at the State Department — a threat that drew widespread criticism.

“That was a quip,” Kellyanne Conway, Trump’s campaign manager, said Monday on MSNBC’s “Morning Joe.” She also wouldn’t confirm what he said at the debate: that as president he would appoint a special prosecutor to investigate Clinton. Trump was “channeling the frustration” of voters, she said.

In a brazen pre-debate move, Trump met with three women who accused the former president of sexual harassment and even rape, then invited them to sit in the debate hall, not far from Bill Clinton and his family. The former president never faced any criminal charges over the allegations, and a lawsuit over an alleged rape was dismissed. He settled a lawsuit with one of the women who claimed harassment.

Trump’s campaign was already struggling before the new video was released, due in part to his uneven performance in the first presidential debate. Many Republicans saw Sunday’s showdown as his last best chance to salvage his campaign.

Asked if that’s “two-faced,” Clinton pointed to Abraham Lincoln’s effort to get the 13th Amendment passed, allowing emancipation of slaves, by lawmakers who did not support African-American equality.