San Francisco Wakes Up to a Celebration for Same-Sex Marriage 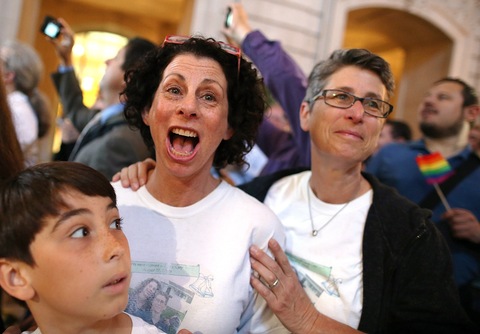 SAN FRANCISCO — 6:30 a.m. at City Hall. San Francisco’s center of government doesn’t even open until 8, but hundreds of same-sex marriage supporters, dozens of reporters and cameramen and every city official you can think of managed to crawl out of bed and show up in the ornate rotunda. You would have thought the Giants had won the pennant, the 49ers had won the Super Bowl and the Warriors had … well you know. Big screens to show video and news headlines were set up; lights and microphones were in place. This was major political theater and the outcome wasn’t even assured.

Same-sex marriage and opposing Proposition 8 — the law that bans gay marriage in California — are the mothers’ milk of politics in this town, a place one professor called “left coast city.” San Francisco has long been seen as a Mecca for gays and lesbians, a more tolerant city than many. And it was clear on this Wednesday morning — the last day of the Supreme Court term — that none of the politicians in attendance wanted to be left out, even though there was a chance they would be disappointed. But they weren’t. 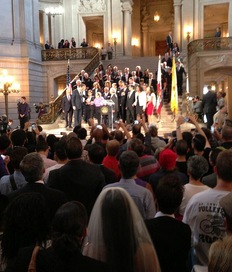 The crowd, which appeared to be mostly same-sex couples, was ready for good news and they cheered mightily when the court announced it was striking down section 3 of the Defense of Marriage Act. But on the podium, no action yet; big wigs were waiting for the Prop. 8 case. When it was reported on the Supreme Court blog, which was projected on a screen in the rotunda, the crowd cheered again — almost as though it was a total victory, which it was not.

The high court said the defendants in the case didn’t have standing, which means that same-sex marriages can go forward in California. A couple of minutes later officials by the score marched down the ceremonial staircase, where so many same-sex couples had celebrated their weddings during the periods when they were legal. Now they would become legal again and the politicians wanted to be part of the party.

Mayor Ed Lee was in his glory; Lt. Gov. Gavin Newsom, the man who defied state law and authorized same sex weddings in 2004, when he was mayor of San Francisco, was in his. He got the biggest hand. And by his side was former mayor Willie Brown, city attorney Dennis Herrera and every city supervisor and state legislator who could squeeze into the official party. Two gay supervisors spoke about how much the decisions means to them. Nobody offered a word of caution, though Herrera did say he had papers ready in case the whole issue goes back to court. “It’s about more than a legal case,” he said, it’s about “the hearts and minds of people throughout the country.”

After about an hour the entire celebration and political exercise wound down — and it wasn’t even 9 a.m. — and the celebrants probably went back to bed, to get ready for more partying in the evening. After all this is San Francisco.