Sanders banked on young voters. Here’s how the numbers have played out

In the weeks leading up to the big primary contests, Bernie Sanders’ campaign invested in grassroots efforts to turn out young voters in states like Michigan, where he narrowly won against Hillary Clinton in 2016. With promises of political revolution and massive proposed changes to U.S. health care, Social Security and education, the independent Vermont senator’s progressive platform did appeal to a majority of young voters in many of Tuesday’s primary races. But they did not turn out in as high numbers as older voters did, and Michigan, Missouri and Mississippi all went to former Vice President Joe Biden.

The latest numbers from AP VoteCast, a survey conducted by NORC at the University of Chicago for the Associated Press and Fox News, show that while health care was top of mind for primary voters of all ages, Sanders’ progressive single-payer health care plan didn’t earn him support among enough of these voters.

Black, suburban and working-class voters were crucial to Biden’s victories in yesterday’s primaries, and ultimately Sanders’ efforts to draw out young people did not match the number of those who came out for the former vice president.

Of the six states with primaries or caucuses yesterday, only one — North Dakota — handily went to Sanders. As of Wednesday afternoon, Washington state had not been called, but Sanders was leading by a slim margin. With a solid 165-delegate lead, the path toward the Democratic nomination is now looking more likely than ever for Biden.

Here’s what else the numbers reveal from yesterday’s races.

In the last primary election, voters aged 18 to 44 were key to Sanders’ primary victory in Michigan. According to CNN exit polls, that age group represented 45 percent of the share of Democratic voters in the state in 2016, and favored the Vermont senator by a margin of 33 percent. 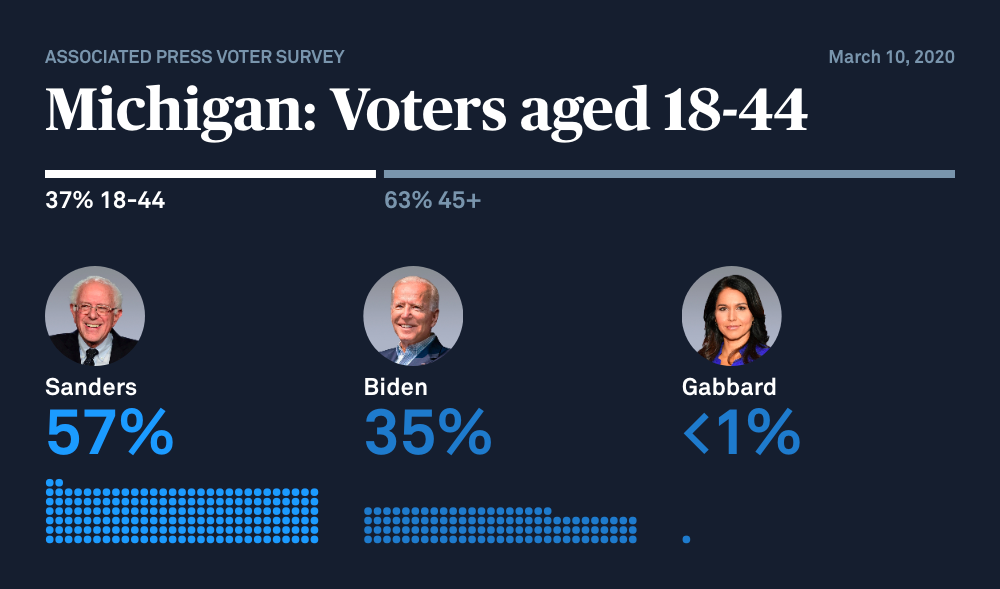 But this year, those younger voters represented a smaller share of voters who went to the polls in Michigan, at just 37 percent. And although 57 percent of this 18-44 age group favored Sanders, Biden’s support among voters aged 45 and older was wider — 63 percent of these older voters favored the former vice president, while just 24 percent supported Sanders.

The trend was similar in Missouri, where Biden secured a wider margin of support among older voters than Sanders did among younger voters. In Mississippi, Biden won over voters in both age groups, with 72 percent aged 18 to 44 supporting him, and less than a quarter favoring Sanders.

This pattern played out across Super Tuesday primary states, too. A recent Brookings Institution analysis of CNN exit polling data found that the only state in which more voters aged 17-29 turned out in higher numbers this year than in the 2016 primaries was Iowa, where the share of this young electorate increased by 6 percent. In a number of other states, such as New Hampshire and Texas, the share of young voters dropped.

“There is, in my view, pretty clear evidence across these data sets that young people did not vote with the same enthusiasm that they voted with in the 2016 primary, nor did they vote with the same enthusiasm they voted in the 2018 general election,” said John Della Volpe, the director of polling at the Harvard Kennedy Institute of Politics, who noted that the 2018 midterms showcased “the power of young people to turn out and increase their share of the electorate.”

Sarah Audelo, the executive director of Alliance for Youth Action, warned against reading too much into the discrepancies between youth voter turnout during this primary season and in 2016, given that there was also a major Republican primary happening four years ago. “What folks are doing is trying to compare 2020 numbers when there’s only one primary,” said Audelo, whose organization works to mobilize and register young voters.

If the news media focuses on “the narrative that ‘youth don’t show up,’” that shifts emphasis away from the reasons why all of the young voters who did cast ballots showed up at the polls,” Elizabeth Bishop, a professor in the Youth Studies program at the CUNY School of Professional Studies in New York, wrote in an email to the PBS NewsHour.

Bishop noted that young people may face challenges with voter registration, among other logistics, particularly because many do not own property and change addresses often. Bishop also added that in states such as Michigan, young voters have faced hourslong lines after showing up to register on the same day of the
primary.

Della Volpe added that he sees a “glimmer of hope” for more young people to turn out when Trump is on the ballot in November, particularly now that the president has a four-year record they can vote on.

“The driver of whether or not someone votes is the degree to which they think their vote can make a tangible difference,” he said, adding that young voters showed up because they saw a tangible difference between Clinton and Sanders four years ago, as well as between Democrats vs. Republicans aligned with Trump in 2018.

Della Volpe also said he was hesitant to read too much into what the lack of youth voter turnout in these primaries could mean for November: “This was a complex primary where most Democrats did not make young people a focal point of their campaign.”

“Young people are very progressive, but candidates have to chase their votes,” said Audelo, citing a poll her organization conducted in January that found at least 58 percent of young Democrats had never been contacted by a presidential campaign. “Candidates just haven’t been reaching young people.”

Health care was the top issue for voters of all ages

But this issue isn’t just important to young people — surveys indicate that voters of all ages ranked health care as the most important issue facing the country this primary season, ahead of the economy and jobs.

“Health care cuts across demographic groups because it is the one thing that is consistently bankrupting voters of all ages in the U.S., versus more age-specific issues like the cost of education,” Bishop said.

U.S. health care spending reached $3.6 trillion in 2018, or $11,172 per person. In the same year, 21.6 percent of adults aged 18-34 in the U.S. were uninsured. Sanders’ “Medicare for All” proposal, which would guarantee government health care coverage for all Americans, has proved particularly popular among this age group. 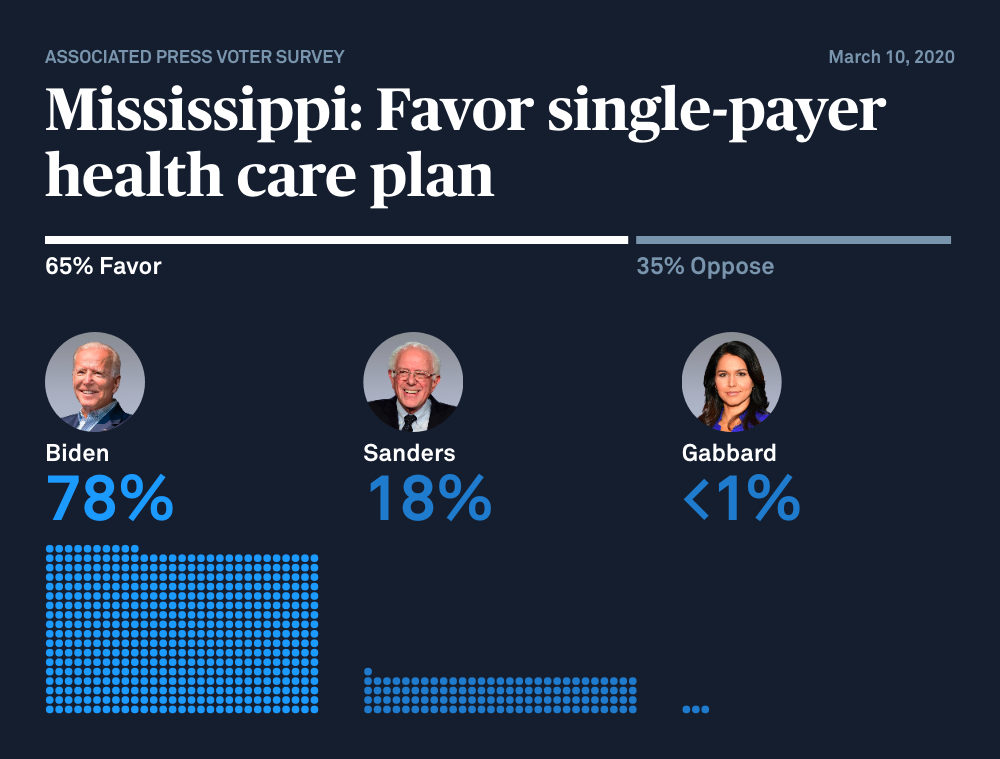 But among voters in Mississippi, Michigan and Missouri who ranked health care as the most important issue, all favored Biden over Sanders. Even in Mississippi, where 65 percent of voters said they favored a single-payer government plan — similar to what Sanders has proposed — over private health insurance, 78 percent still supported Biden, who has said he would improve the Affordable Care Act with a public option rather than offer a single-payer plan.

In all three of these states, primary voters said Biden would be best able to handle health care out of any of the presidential candidates. This was just a slim margin of voters in Missouri, though, where 36 percent favored Biden on health care and 35 percent favored Sanders.

No matter the plan, Della Volpe said that health care would be a difficult issue for both Biden and Sanders as they seek to court more young voters in November, particularly because so many of them are desperate for better plans: “The 25-, 26-year-old bartenders I talk to — they’re looking for solutions today or tomorrow,” he said.

Biden’s success in Tuesday’s primaries was thanks to voters representing a wide swath of different demographics, particularly African Americans, and suburban and working-class members of the electorate.

But Della Volpe said Biden’s wins shouldn’t discount the strides Sanders has made with young voters, and the significant role they’ve played in shifting the Democratic Party further to the left over the past four years.

“This was a complex primary where most Democrats did not make young people a focal point of their campaign.”

“During two different cycles, they almost toppled the Democratic establishment,” Della Volpe said of the young people behind Sanders’ political movement. “Although they were not successful in winning the nomination [in 2016], this group of young Americans are transforming the party and the country,” he added, noting that conversations about Medicare for All were virtually nonexistent in the 2008 presidential race.

This generational shift cuts across race and class. Although black voters of all ages overall favored Biden in Mississippi, a higher share of those aged 18-44 supported Sanders instead.

Biden will need to pay closer attention to these young voters should he secure the Democratic nomination later this year, both Sarah Audelo and Elizabeth Bishop said.

“Even though Sen. Sanders likely cannot end up with the establishment DNC nomination, it is clear that his campaign’s strategy of mobilizing a strong intersectional coalition of hundreds of thousands of intergenerational organizers is a key to getting out the vote for the general election in 2020,” said Bishop.

Audelo, who was Hillary Clinton’s voting director in 2016, said she learned from that election the importance of engaging people early on, rather than waiting until the general election. “[Biden’s] not targeting young people is a problem that the campaign needs to address immediately,” said Audelo. “He needs to make organizing young people core and central to his campaign, because he needs them to get anywhere close to a victory in November.”