During last night’s Democratic presidential debate, Vermont Sen. Bernie Sanders apologized to Hillary Clinton for the data breach that allowed members of his staff to see information from her campaign’s voter database.

As a result of this breach, the Democratic National Committee had cut off the Sanders campaign’s access to its national voter files, and the campaign threatened a lawsuit against the DNC.

Why did this provoke such a strong reaction from the parties involved? Campaigns have always had a vested interest in gathering as much information about voters as possible in order to know which constituencies and areas would be the most valuable to target for voting turnout.

But in the past decade, the information available to campaigns has become incredibly granular and precise, not just about groups of voters, but also about every individual voter in the country. As such, this information is an invaluable commodity to political campaigns, both on the local and national level. And the way it’s being wielded now tells us a lot about why the Clinton-Sanders data breach was such a big deal to both candidates.

In the wake of John Kerry’s loss in the 2004 Presidential election, the DNC began to consolidate its voter information, something that no political party had done before.

The committee requested voter files from all 50 states, which contain information on all registered voters, such as names, contact information, gender, age, and party affiliation. All of this information was consolidated into a massive voter database that is now available to all Democratic candidates.

This information is vital to political campaigns. Information about a voter’s age, for example, can tell a campaign whether he or she would be more interested in policy on college tuition or social security and Medicare.

A voter’s gender can tell a campaign whether or not to target the voter with messaging on women’s health and reproductive rights. 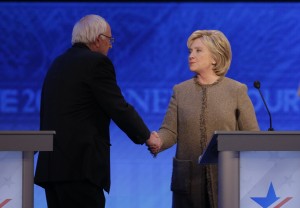 How often a person votes can let a campaign know whether that person needs a knock on the door to remind them to leave the house on Election Day, or whether a simple phone call or post card will suffice.

Campaigns also conduct research on individual voters, including magazine subscriptions, past purchases and social media posts. This more specific information can be used to predict how individuals with similar activities will vote on Election Day.

It was a breach of this information that sparked controversy between the Clinton and Sanders campaigns, and the resulting loss of access to the DNC voter files was a brief but serious blow to the Sanders campaign.

As of yesterday, the campaign regained access to the DNC voter records — but the episode highlights the value that modern political campaigns place on voter data, as well as the role that the data will play in the coming election season.

As part of the associate producer "Dream Team" (as they refer to themselves) at NewsHour Weekend, Zachary Green produces and assists in the production of many of the segments featured on NewsHour Weekend. This includes shooting, writing, and editing such pieces as "No Comment" and "Digital Death". Before joining NewsHour, Zachary was an associate producer for Need to Know on PBS.