WASHINGTON — Characterizing Wall Street as an industry run on “greed, fraud, dishonesty and arrogance,” Democratic presidential candidate Bernie Sanders pledged to break up the country’s biggest financial firms within a year and limit banking fees placed on consumers, should he become president, in a fiery speech on Tuesday.

He coupled that promise, delivered in front of a raucous crowd just a few subway stops from Wall Street, with a series of attacks on rival Hillary Clinton, arguing her personal and political ties make her unable to truly take on the financial industry.

“To those on Wall Street who may be listening today, let me be very clear: Greed is not good,” said Sanders, in a reference to Oliver Stone’s 1980s film, “Wall Street.”

“If Wall Street does not end its greed, we will end it for them,” he said, as a cheering audience jumped to its feet. 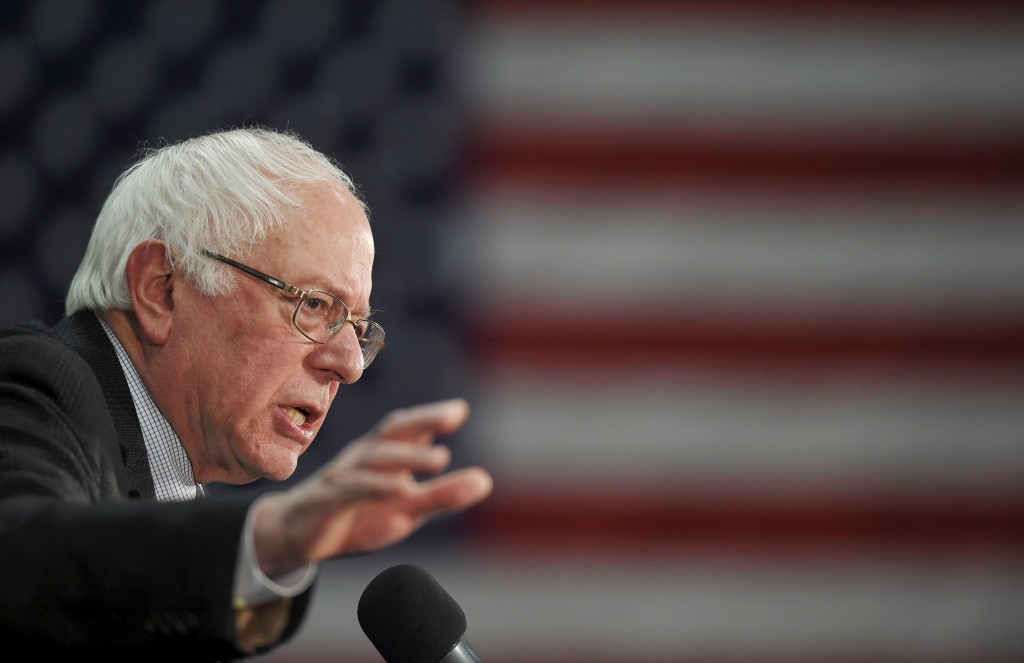 Sanders has made regulating Wall Street a focus of his primary bid, with calls to curb the political influence of “millionaires and billionaires” at the core of his message. But the attacks on Clinton marked an escalation in his offensive against the Democratic front-runner. Clinton’s policies, he said, would do little more than “impose a few more fees and regulations.”

“My opponent says that, as a senator, she told bankers to ‘cut it out’ and end their destructive behavior,” he said, to laughter. “But, in my view, establishment politicians are the ones who need to cut it out,” he said.

Clinton and her husband, former President Bill Clinton, have made tens of millions in speaking fees from addresses to Wall Street banks, insurance companies and other financial firms — a fact Sanders alluded to in his speech, saying the banks give “very generous speaking fees to those who go before them.”

She also opposes reinstating the Depression-era Glass-Steagall Act, which effectively limited the size of financial companies by prohibiting commercial banks from engaging in investment banking activities. Sanders would re-establish the law, initially repealed during the Clinton administration.

Many economists question whether that law would have prevented the crisis, given that many financial institutions that failed, including Lehman Brothers and Bear Stearns, were investment banks and their failure wouldn’t have been prevented by Glass-Steagall.

Sanders vowed to create a “too-big-to-fail” list of companies within the first 100 days of his administration whose failure would pose a grave risk to the U.S. economy without a taxpayer bailout. Those firms would be forced to reorganize within a year.

Sanders also said he wants to cap ATM fees at two dollars and cap interest rates on credit cards and consumer loans at 15 percent. He also promised to take a tougher tact against industry abuses, noting that major financial institutions have been fined only $204 billion since 2009. And he promised to restructure credit rating agencies and the Federal Reserve, so bankers cannot serve on the body’s board.

“The reality is that fraud is the business model on Wall Street,” he said. “It is not the exception to the rule. It is the rule.”

Analysts say Sanders’ plans to break up the large banks would be difficult to achieve and is not the only way to limit their size or future bailouts.

“While it makes for great political theater, there is zero chance of breaking up the large banks,” Greg McBride, chief financial analyst at Bankrate.com, said.

His plans would require agreements from the heads of many agencies and other regulators, which Sanders would appoint, but it would also require approval by the Senate. Nominees that support breaking up the banks would be unlikely to make it through Senate confirmation.

Several pieces of legislation to break up large banks have been introduced in Congress since the crisis but none have won much support by either Democratic or GOP majorities.

Clinton’s campaign tried to pre-empt Sanders’ speech Monday, putting out a statement from a top aide arguing that Clinton’s financial regulation proposals would do more to crack down on industry abuses.

“Sen. Sanders should go beyond his existing plans for reforming Wall Street and endorse Hillary Clinton’s tough, comprehensive proposals to rein in risky behavior within the shadow banking sector,” the statement from Gary Gensler, a top campaign finance official and former chair of the Commodity Futures Trading Commission, said.