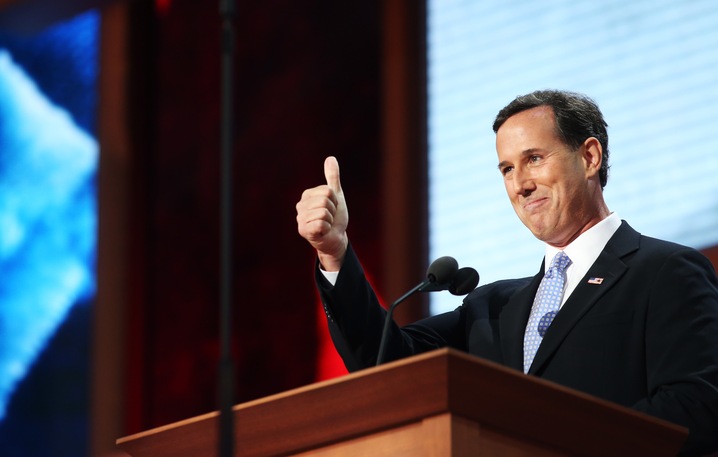 Former U.S. Sen. Rick Santorum on stage at the Republican National Convention in August, 2012. Santorum has said he is undecided as to whether he will run for president in the upcoming election cycle. Credit: Spencer Platt/Getty Images

He’s just not sure he’ll be one of those hopefuls ever again.

“Yeah, I don’t know if I can do this. It’s just tough,” Santorum said about another White House run.

The former Pennsylvania senator tells The Associated Press in an interview that he isn’t ruling out a 2016 candidacy.

But, he says, there are plenty of reasons why he wouldn’t do it.

He is enjoying a second career as a movie studio executive. His daughter’s health remains a concern.

And, Santorum writes in a new book, he can help shape his party’s future from offstage.

In the interview, Santorum said the GOP will struggle to win races unless candidates came up with policies that help working Americans.

Victories will be tough, he said, unless elected officials stop being obstructionists.

Santorum said the libertarian streak running through his party distorts the definition of freedom, and that politicians wrongly look to President Ronald Reagan’s policies to address today’s challenges.

“Do Republicans really care less about the person at the bottom of the ladder than Democrats do? To be painfully honest, I would have to say in some ways `yes,'” Santorum writes in his book, “Blue Collar Conservatives: Recommitting to an America That Works.”

The tough talk raises questions about Santorum’s viability in what could be a crowded 2016 primary field.

Also, he’s not rushing to camp out in early nominating Iowa or New Hampshire again.

Santorum ran an upstart campaign in 2012, surviving long enough to be Mitt Romney’s last remaining rival. He struggled to raise money or support among establishment-minded Republicans, but his socially conservative profile drew enough backing for Santorum to pick up victories in 11 states.

Even in victory, his disorganized campaign cost him, including failing to qualify for the ballot in Virginia.

“We cannot run the campaign we ran last time if we run this time,” Santorum said.

How Republicans win is the focus of Santorum’s latest book, to be released Monday.

Santorum offers ideas on energy, education, the economy and health care. It comes across as part think tank policy paper, part campaign playbook and part communications advice on how to connect with working-class voters.

For instance, Republicans should not focus exclusively on business leaders and “job creators” and should speak to employees, Santorum said.

Anxiety among those voters remains high, and Republicans have for too long talked to the top earners and not the workers.

“A rising tide lifts all boats – unless your boat has a hole in it. A lot of Americans, we’ve got holes in our boats,” Santorum said. “Millions and millions of Americans (are) out there who want good lives but have holes in their boats. … They just see the water level going up and their boat sinking.”

That’s why, he argues, candidates need to put forward policies to help those voters.

After the 2012 campaign, he signed on as CEO of EchoLight Studies, which produces movies rooted in faith and family.

At home, 5-year-old daughter Bella keeps Santorum busy. She has a genetic disorder, Trisomy 18, which causes brain, heart and internal organ developmental abnormalities. Almost all children die within the first year of life.

Bella turns 6 in May and the senator is at work on a book about his daughter. Her difficult nights have sometimes kept Santorum at her bedside.

Santorum said family issues would drive his decision to run or not, and Bella would be a key factor.

His other six other children, Santorum said, are “all very open to dad doing this again.”

But Santorum isn’t rushing into anything. A primary might feature the libertarian wing of the party, led in part by two prominent tea partyers, Sens. Rand Paul of Kentucky and Ted Cruz of Texas.

“There’s a strain within the Republican Party now that smacks of the no-government conservatism,” Santorum said. “That wasn’t Ronald Regan. It wasn’t Teddy Roosevelt. It wasn’t Abraham Lincoln. It wasn’t any Republican that I’m aware of. It wasn’t Calvin Coolidge. And yet there seems to be this creation of this strain of conservatism that has no basis in conservatism.”

Santorum said Republicans should respect Reagan, but he doubted the former president would offer the same policies today that he did during the 1970s and 1980s.

Santorum also includes plenty of incendiary rhetoric in his book that he acknowledges could haunt him should he run again.

In addition to the sentence about Republicans and social safety nets, Santorum writes that poor voters “took their lie about sex without consequences as gospel” and calls climate change a “hyped-up crisis.”