“The Welder”—or specifically the welder in political ads—is one character we’re happy to say goodbye to in 2013. All images and sounds were pulled from 2012 campaign ads. You can hear ads from Rick Santorum, Newt Gingrich, Mitt Romney, Rick Perry and President Obama. Video by Joshua Barajas

A political ad parses a candidate’s message into images and sounds meant to resonate with its audience. While a lot of political advertising is laced with loose patriotic symbolism and Americana—a wheat field here, a rah-rahing crowd of real Americans there—candidates make specific choices to correspond with their campaign themes. In other words, the imagery is not random.

When discussing America’s future, Newt Gingrich relied on Lindsey’s floral shop for a dose of optimism. Rick Perry stuck with the cowboy when establishing himself as a Washington outsider. And Herman Cain went dystopian.

The NewsHour explored this further with Ad Libs, an interactive tool that allowed users to create their own campaign ad using their Facebook data.

Now that the 2012 election season is behind us, we talked to several political communication experts about the year’s most memorable political advertising archetypes and themes (with honorable mentions going to China, the Jeep, Hispanics and Big Bird). 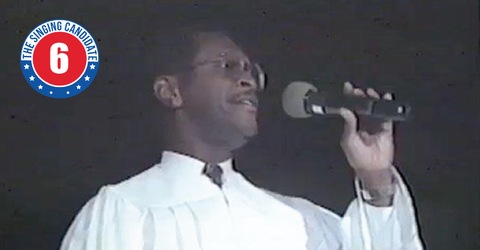 The road to the White House was particularly musical this year, beginning with the unearthing of a 1991 video of Republican candidate Herman Cain reimagining a John Lennon classic with “Imagine There’s No Pizza.” When Mitt Romney broke into song with a full verse of “America the Beautiful” at a Florida primary rally, it became fodder for an attack ad from President Obama’s re-election campaign. Called “Firms”, it used Romney’s voice as the soundtrack with a cavalcade of news reports about corporations outsourcing jobs overseas—all firms that related to Romney’s professional record at Bain Capital.

The Obama for America TV spot “issues a strong attack without ever saying a word,” said Jessica Lu, a contributor to University of Maryland’s political ad analysis project.

“[‘Firms’] shows a stark contrast between Romney’s rhetoric about the value of Americans and American jobs, and his actual record on jobs,” she said.

The Romney campaign countered with its own singing attack ad, featuring another musical moment from the campaign trail: Obama singing a few bars of Al Green’s “Let’s Stay Together” in a speech during a New York fundraising event.

The electorate faced an all-consuming question: Who sang it better?

See also: Hugh Atkin’s twin parodies of Eminem’s “The Real Slim Shady” and M.C. Hammer’s “U Can’t Touch This” that satirize Romney and the president. 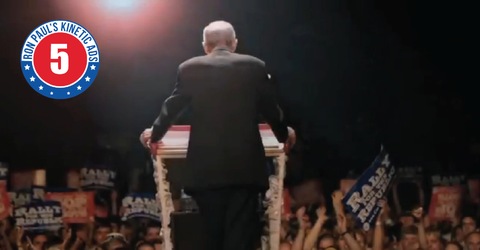 Usually it’s a movie trailer that follows the green MPAA-style rating bar. But Ron Paul deployed that visual cue in a few political ads. An action film may not have followed, but the reversal did not mean the content was any less entertaining. Paul’s ads adopted a style unseen in past campaigns.

“It is definitely appealing to a younger group who is very comfortable with different production techniques,” UNC professor Anne Johnston said. “He’s taking advantage of thinking about a young audience familiar with edgy graphics.”

There’s a microcosm of the youthful energy in Paul’s ads that went unmatched throughout the 2012 primary contest. Animated text overwhelms the viewer in one ad, while the Department of Education blows up in “Big Dog.”

“We think of it as controversial, but there’s an audience that’s very comfortable with those visuals,” Johnston said.

In particular, “Big Dog” was an example of a candidate utilizing a tool little seen this election cycle: humor.

USA Today’s Washington Bureau Chief Susan Page told us that ad “had a sense of humor—unusual in a campaign year of sledgehammer attacks—and it was a positive ad by a candidate about the candidate. We didn’t see many of those this year.”

See also: Paul’s introduction into the 2012 presidential campaign. It has the bombast of an action film trailer. 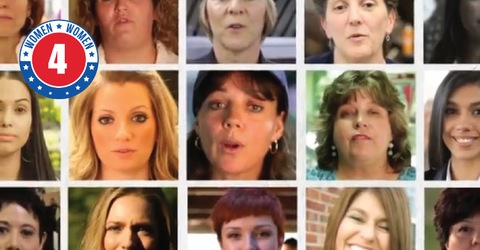 Both camps fought to galvanize female voters with their campaign ads: Obama tried to keep support from female voters he won in 2008 while Romney tried to win women over.

“Women made up a disproportionate part of undecided voters and those still open to changing their minds,” Page said.

Obama framed Romney’s policies as counterproductive to women’s rights, attacking the former governor for promising to eliminate funding for Planned Parenthood. Following Romney’s viral “binders full of women” comment in the second presidential debate, the Romney camp released an online ad featuring three female cabinet members who had served in the former Massachusetts governor’s administration, with one of them testifying that Romney “totally gets working women.”

In the candidates’ quest to court female voters, both campaigns released ads that, according to Page, offered “testimonials from women—not actors, but actual women from key states.”

See also: a Romney ad that painted a bleak economic outlook for women under Obama’s policies. 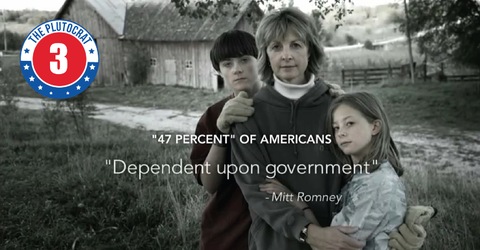 When Mother Jones released the video of Romney’s “47 percent” comment from a private fundraiser, it inspired two distinctly different ads from the Obama campaign. The first paired the secretly recorded statement with details of Romney’s tax returns. But a much more enduring juxtaposition was made in another commercial called “My Job.”

The ad “was simple, powerful and devastating,” said LSU professor Robert Mann, “using Romney’s own words, along with images of average Americans”—presumably the Americans Romney referred to as “victims” who did not pay federal income taxes.

The year’s most memorable “caught on tape” moment was less revelation than confirmation of the months-long yarn the Obama campaign had been spinning about his Republican opponent: Romney was Thurston Howell.

Obama front-loaded his advertising spending earlier in the year, portraying Romney as an out-of-touch tycoon, according to Mann. And Romney’s advertising was “negative—all about Obama,” said Travis Ridout, a political science professor at Washington State University. “It seems the Romney campaign thought they could win by making this race a referendum on Obama, and so they didn’t do much to define Romney,” he said. 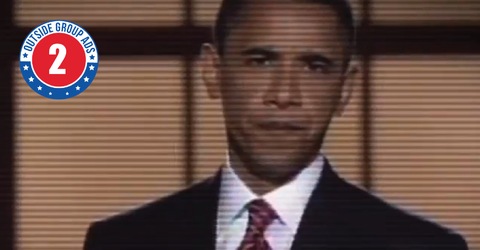 If you lived in a battleground state during the 2012 presidential election, it was difficult to ignore political advertising this year. The Wesleyan Media Project reported that, as of Oct. 29, presidential ad airings on local broadcast and national cable surpassed the one million mark in 2012—a 39.1 percent jump from the 730,000 ads that aired in 2008. And that didn’t include the ads that aired during the last week of the general election. (Don’t miss our look at ad spending, in partnership with NPR and Kantar Media/CMAG.)

For as many ads as were out there this cycle, there were fewer that really stood out, said Erika Fowler, co-director of the Wesleyan Media Project.

“The ones that do come to mind may seem more memorable due to the media attention they received than for their actual organic reception among citizens,” she said.

The project also reported that fewer markets were targeted during 2012 than in 2008. If anything, election night meant a welcome respite from the onslaught of 30-second campaign ads, many of which were ads by outside groups such as Super PACs.

“[Outside group ads] were, by and large, uncreative, cookie-cutter ads that made no one stop and think,” said Ridout, another co-director of the project.

Super PAC ads may not have had a single, memorable archetype that’s easy to recall, but the sheer volume of these ads could not be ignored this year, unless you turned the TV off.

See also: an analysis by Ace Metrix on what were the most effective political ads this year.

1. The welder or blue collar worker 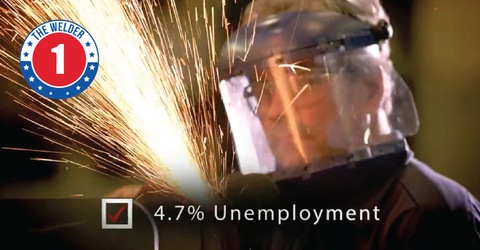 Watch any political ad about the economy or jobs, and you’ll likely see a familiar character: a welder in full protective gear generating a shower of bright sparks. Whether it was an ad that featured “real” Americans, the middle class or blue collar workers, the welder was a distillation of the campaign promise that Americans are (or will be) getting back to work.

When unemployment is mentioned in campaign ads, shots of desolate factories or warehouses tend to follow. But then the welder might appear, amid a dazzling display of sparks, to offer reprieve. The archetype was a stark contrast to other images of economic inertia, from unemployed Americans, standing still and staring into the camera, to shots of an empty steel plant.

“Perhaps in bad economic times, times of unemployment, the dominant figure [in political advertising] is the blue-collar worker,” Ridout said. “But there may be room for a white collar worker when we’re talking about economic growth; white collar seems to convey something more aspirational.”

At the very least, welders make better visuals than an office cubicle, he said.