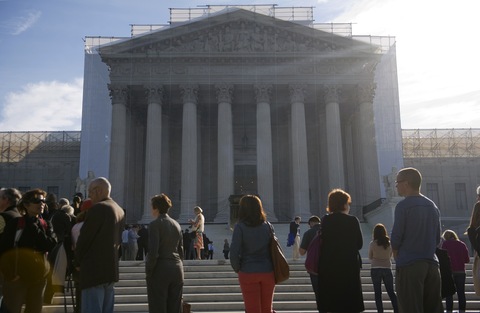 The Supreme Court was back in session Monday after a three-month recess, and Marcia Coyle, chief Washington correspondent for The National Law Journal, spoke on the NewsHour to preview the court’s new term.

None of the 40 cases currently on the docket are blockbusters on the level of last term’s review of the Affordable Care Act. Still, some of the cases are already attracting wide attention, and Chief Justice John Roberts in particular will be under the microscope after he provided the surprise fifth vote to uphold the individual mandate in the health care law.

Coyle walked us through a quick primer on what to expect from the court over the next nine months.

It has been years since the court handled its last major affirmative action case: Grutter v. Bollinger in 2003. Five justices voted to uphold the University of Michigan Law School’s race-conscious admission policy, with Justice Sandra Day O’Connor writing for the majority that the Fourteenth Amendment’s Equal Protection Clause does not prevent a university from considering an applicant’s race during its admission process, so long as each applicant is evaluated holistically.

The court will revisit the issue Oct. 10, when it is scheduled to hear oral arguments in Fisher v. University of Texas at Austin, sure to be one of the term’s highlights. The Fisher case involves a challenge to the race-conscious admission policy used by the University of Texas at Austin to evaluate applicants for some of the seats in its new freshman classes. Abigail Fisher, a white applicant who was rejected by the school, filed suit, asserting that the policy violates the Equal Protection Clause.

Many are watching for a significant shift in the court’s stance toward affirmative action, given the changes in the court’s roster since the Grutter decision was handed down. O’Connor, the author of the Grutter decision, has since been replaced by Justice Samuel Alito. And Justice John Paul Stevens, another of the five justices in the Grutter majority, has since been replaced by Justice Elena Kagan, the former Solicitor General who already recused herself from the court’s deliberations over whether to even hear the Fisher case.

The court kicked off the new term with the second round of oral arguments in Kiobel v. Royal Dutch Petroleum, a case with significant implications for multinational corporations and human rights groups.

The Kiobel case was originally brought to federal court by a group of 12 Nigerians who alleged that Royal Dutch Petroleum, a foreign subsidiary of Royal Dutch Shell, was complicit in human rights abuses committed by the Nigerian government.

At issue during the first round of oral arguments was whether corporations could be held liable in suits brought by foreign nationals for violations of international law committed overseas. But the ensuing discussion was dominated instead by a more fundamental question — whether U.S. courts even had jurisdiction over such suits — and the court ordered a second round of arguments devoted to that very question.

Multinational corporations and human rights groups are paying close attention to the Kiobel case, since they are often parties to suits brought up under the Alien Tort Statute. Human rights groups have relied on the statute over the last few decades to take individuals and corporations to court for unlawful conduct allegedly committed outside U.S. territory.

The justices have been petitioned to take on several other high-profile cases this term, but so far it has held off on deciding whether to add them to the docket.

Among those: challenges to aspects of the federal Defense of Marriage Act that block legally wed gay couples from receiving various benefits under federal law, as well as challenges to California’s Proposition 8, which amended the state’s constitution to prohibit gay marriage.

It is also possible the court will perform another review of the 1965 Voting Rights Act. It is still considering whether to take up challenges to the landmark civil rights legislation brought by municipalities in Alabama and North Carolina, and a dispute over South Carolina’s voter identification law may reach the Court before the new term ends.