Watch the Senate panel vote on Neil Gorsuch’s nomination to the Supreme Court on Monday.

WASHINGTON — A deeply divided Senate panel favorably recommended Supreme Court nominee Neil Gorsuch on Monday, sending the nomination to the full Senate for what is expected to be a partisan showdown — and eventual confirmation.

The 11-9 committee vote for President Donald Trump’s nominee, strictly along party lines, came shortly after Democrats secured enough votes to block the nomination in the full Senate. But that Democratic success was virtually certain to be a short-lived political victory, as Republicans vowed to change Senate rules to put Gorsuch on the court and score a much-needed win for their party.

Delaware Sen. Chris Coons said before the vote that he would vote with his fellow Democrats to block the nomination later this week, giving them the 41 votes needed. Once they do block it, Majority Leader Mitch McConnell of Kentucky is likely to change Senate rules so that Gorsuch can be confirmed with a simple majority in the 100-seat chamber instead of the 60 votes now required.

Judiciary Chairman Chuck Grassley, R-Iowa, strongly defended Gorsuch as a fair and independent man. He said Democrats had worked to try and find fault with him, but “that fault will not stick.”

“He’s a mainstream judge who’s earned the universal respect of his colleagues on the bench and in the bar,” Grassley said. “He applies the law as we in Congress write it_as the judicial oath says, without respect to persons. And he refuses to compromise his independence.”

However, Sen. Dianne Feinstein of California, the top Democrat on the panel, said Gorsuch’s answers during two days of questioning before the committee were “diluted with ambiguity.” She announced her opposition to the nominee.

“Judge Gorsuch’s views were difficult to discern because he refused to answer questions, even basic questions that had been answered by previous nominees,” Feinstein said.

Democrats are angry in part because McConnell and Grassley last year blocked President Barack Obama’s pick for the job after the February 2016 death of Justice Antonin Scalia. Even before Obama nominated Judge Merrick Garland, McConnell said the next president should choose the nominee, and Grassley’s committee never held a hearing on Garland.

“This action by my colleagues was unacceptable and has scarred this process and this body,” Coons said before announcing his opposition. Coons said he hoped the Senate could still find agreement on a way to avoid the rules change, but the chances of such a deal were slim.

With Coons’ announcement, 40 Democrats and one independent have announced they will vote to block the nomination on a procedural cloture vote — a parliamentary step to advance the nomination — and oppose the choice.

Sens. Coons, Feinstein, Patrick Leahy of Vermont and Mark Warner of Virginia all said for the first time Monday that they’d vote to block. On Sunday, Sen. Jon Tester, D-Mont., who is up for re-election next year in a state Trump won handily, announced his opposition. 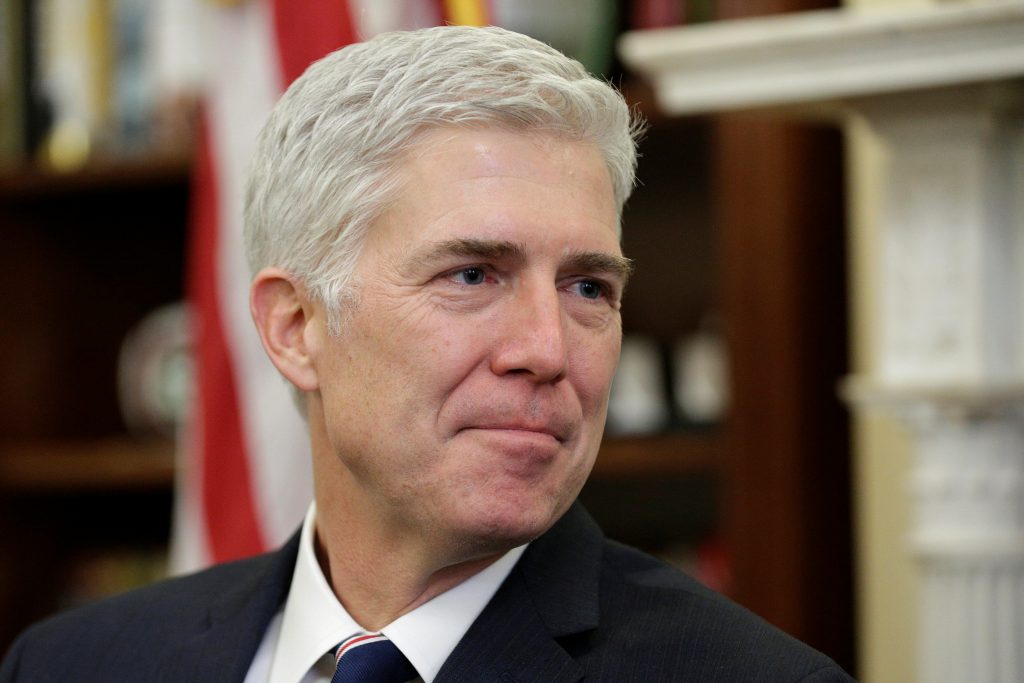 But another Democrat in a Republican-dominated state up for re-election next year, Joe Donnelly of Indiana, announced he would support the president’s nominee Sunday. Donnelly called Gorsuch, 49, “a qualified jurist who will base his decisions on his understanding of the law and is well-respected among his peers.”

Donnelly is one of three Democrats who is supporting the nomination. Sens. Heidi Heitkamp of North Dakota and Joe Manchin of West Virginia have also said they will vote for him.

The majority of Senate Democrats have vowed to support Senate Minority Leader Chuck Schumer, D-N.Y., who has led the effort to block the nominee. Republicans argue the action is exceedingly rare for Supreme Court choices.

Although a change in Senate rules might seem procedural or obscure, it is known on Capitol Hill as the “nuclear option” because it would amount to a dramatic departure from Senate norms of bipartisanship and collegiality. It could also mean that Trump and future presidents will not have to be as concerned about compromising with the minority party when nominating Supreme Court justices.

It would not be unprecedented. In 2013, Democrats were in the majority and upset about appellate court nominees being blocked by Republicans. They pushed through a rules change lowering the vote threshold on all nominees except for the Supreme Court from 60 votes to a simple majority.

In addition to Gorsuch, the Judiciary Committee approved two other nominations — Rod Rosenstein to be deputy attorney general and Rachel Brand to be associate attorney general. If confirmed, they will be the No. 2 and No. 3 officials at the Justice Department under Attorney General Jeff Sessions.

How COVID-19 is changing the English language

By Roger J. Kreuz, The Conversation

France to ban use of wild animals in circuses, marine parks