It’s a controversial position and one that McConnell announced only hours after Scalia died last month. Statements from other Republican senators Wednesday morning indicate they are standing behind McConnell.

Senate Democrats, led by Minority Leader Harry Reid, D-Nev., have been blasting their GOP colleagues for refusing to even meet or consider any Obama pick. Now they have a name to attach to their arguments.

“I am optimistic that cooler heads will prevail, and sensible Republicans will provide Judge Garland with the fair treatment that a man of his stature and qualifications deserves,” Reid said in a statement. “The American people expect their elected leaders to do their jobs. President Obama is performing his Constitutional duty. I hope Senate Republicans will do theirs.”

In Garland, Democrats have a veteran judge with a track record of drawing bipartisan support from Senate lawmakers. According to Reid’s office, 32 Senate Republicans, including seven current GOP lawmakers in the upper chamber, voted to confirm Garland to the United States Court of Appeals for the D.C. Circuit in a 76-23 vote in 1997. Garland became chief judge of the court in 2013.

Already, clips of Sen. Orrin Hatch, R-Utah, praising Garland in a speech during his last confirmation fight are are circulating online. Hatch is a senior member of the judiciary committee.

“I believe that not only is he a fine nominee, but as good as Republicans can expect from [the Clinton administration]. In fact I would put him at the top of the list,” Hatch said in the 1997 speech.

Despite Garland’s history, Republicans now say they want to focus on the process, not his qualifications. To that end, GOP Senators have been using what they call the “Biden rule” to justify blocking any Obama nomination this year.

In 1992, then-Judiciary Chairman Joe Biden gave a speech on the Senate floor arguing against President George H.W. Bush nominating someone if a justice retired from the court in an election year.

“It is my view that if a Supreme Court Justice resigns tomorrow, or within the next several weeks, or resigns at the end of the summer, President Bush should consider following the practice of a majority of his predecessors and not – and not – name a nominee until after the November election is completed,” Biden said at the time. 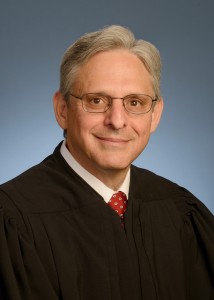 McConnell cited the Biden Rule today as he defended the GOP leadership’s opposition to Garland’s nomination.

“The American people may well elect a President who decides to nominate Judge Garland for Senate consideration. The next President may also nominate someone very different. Either way, our view is this: Give the people a voice in the filing of this vacancy,” McConnell said.

Critics have pointed out that there are several examples over the last century of the Senate confirming Supreme Court justices during an election year. Most recently, Justice Anthony Kennedy was confirmed by a Democrat-controlled Senate in 1988 after being nominated by President Reagan the previous fall.

House Democratic leaders also chimed in today, calling on Senate Republicans to reverse their position as the White House and allies launched a campaign to pressure McConnell to take up the nomination. Obama announced that Garland will visit Capitol Hill tomorrow to start meeting with senators.

“President Obama has chosen a respected jurist who embodies wisdom, judgment, and dedication to justice for all Americans,” House Democratic Leader Nancy Pelosi of California said in a statement. “The American people expect Judge Merrick Garland to be given a fair hearing and a timely vote.”