Several Senate Republicans have announced their opposition to the health care bill unveiled Thursday, leaving the caucus short of the support it needs to pass the legislation ahead of a final vote next week.

Senate Republican leaders published the draft bill Thursday morning — making public for the first time the details of their plan to scale back the Affordable Care Act, a longtime GOP goal that President Donald Trump campaigned on last year.

But shortly after the bill was released, four Republicans — Sens. Ted Cruz of Texas, Ron Johnson of Wisconsin, Mike Lee of Utah and Rand Paul of Kentucky — said they were open to making changes to the bill, but opposed the plan as it is currently written.

“It does not appear this draft as written will accomplish the most important promise that we made to Americans: to repeal Obamacare and lower their healthcare costs,” the group said in a statement.

On Friday, Sen. Dean Heller, R-Nev., who is up for reelection in 2018, also came out against the bill. “It’s simply not the answer,” Heller said of the bill at a press conference. “In this form, I will not support it.”

Senate Republicans hold 52 seats in the Senate. They need 51 votes to pass the bill, meaning they can only afford two defections and still use Vice President Mike Pence to cast the tie-breaking 51st vote.

But significant differences remain within the Senate Republican caucus on key parts of the legislation. “There’s a lot of misunderstanding and still a lot of things that have to be discussed and straightened out,” Senate Finance Chairman Orrin Hatch, R-Utah, told reporters Thursday.

The current bill would cap federal funding for Medicaid, a significant change to the program that most health experts believe would lower overall spending in the long term. The bill would also phase out the expansion of Medicaid under the Affordable Care act by 2024. The Medicaid expansion covered 14 million people, according to the Kaiser Family Foundation.

The plan would keep the tax credit structure under the Affordable Care Act largely intact, and give states flexibility in extending subsidies to help people who have trouble paying for health insurance.

That provision in the Senate plan could become a sticking point once the House and Senate begin negotiating a final bill that could pass both chambers and be sent to President Donald Trump’s desk to be signed into law.

But to get to that point, the Senate must first pass its bill, a task that will require winning over moderate Republicans, like Sen. Susan Collins of Maine and Lisa Murkowski of Alaska, who have signaled opposition to any bill that would potentially strip health coverage from millions of Americans.

The Senate bill will also need support from conservative members, like Paul, who have said the House bill did not go far enough in repealing the Affordable Care Act, known as Obamacare. Paul told reporters Thursday that in order for him to vote for the Senate bill, it “would need to look more like repeal of Obamacare, and less like we’re keeping Obamacare.”

Republicans have made repealing and replacing former President Barack Obama’s signature domestic policy achievement a top priority for years. Mr. Trump campaigned on the issue, and has said that Congress must pass a health care overhaul before proceeding with other parts of his agenda.

Trump addressed the Senate health care bill briefly in comments to reporters at the White House on Thursday. “Obamacare is dead, and we’re putting a plan out today that is going to be negotiated. We’d love to have some Democrats’ support, but they’re obstructionists,” Trump said. 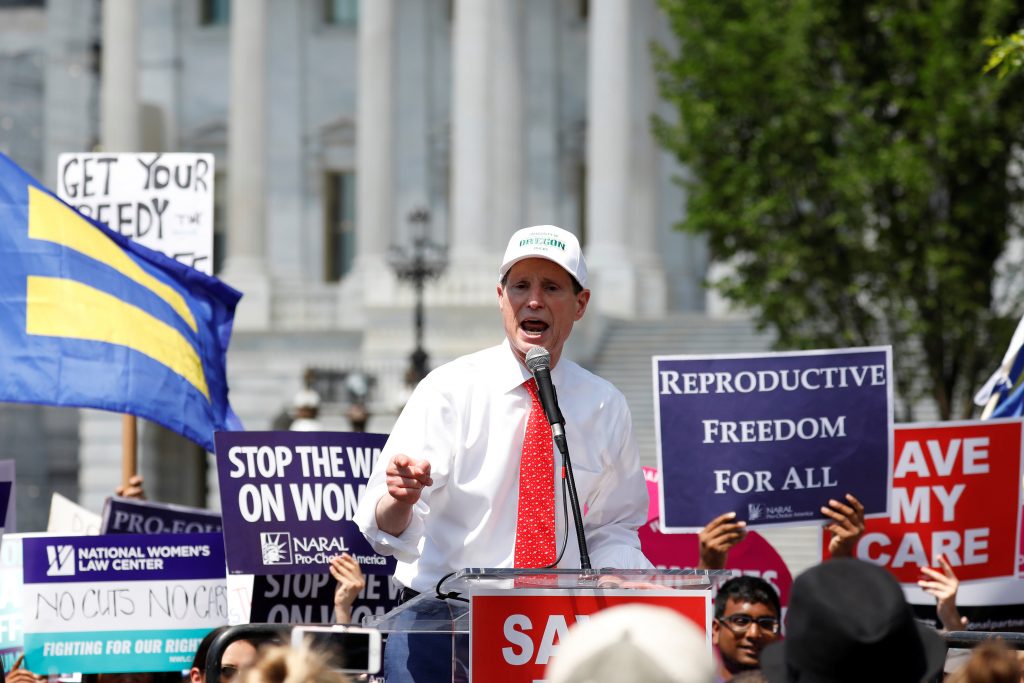 Democratic Sen. Ron Wyden or Oregon speaks during a demonstration against the Republican health care plan outside the U.S. Capitol on June 21, 2017. Photo by REUTERS/Aaron P. Bernstein

Democrats, in both the House and Senate, have been staunchly opposed to the Republicans’ efforts to overhaul the Affordable Care Act. The Senate bill is not expected to get any support from Democrats. Sen. Bob Casey, D-Pa., signaled his opposition Thursday by highlighting sections of the bill in a series of posts on Twitter.

After the Senate GOP caucus meeting Thursday, a spokesperson for Collins said in a statement that the senator “has a number of concerns” about the Republican plan.

Collins will be “particularly interested in examining the forthcoming CBO analysis on the impact on insurance coverage, the effect on insurance premiums, and the changes in the Medicaid program,” the senator’s communications director, Annie Clark, said.

The Congressional Budget Office, which estimates the potential financial impact of legislation, said Thursday that it plans to release a score of the Senate Republican bill next week. The CBO projected that the initial House bill would result in 24 million people losing their health coverage by 2026.

Several senators on Thursday said they needed to read the entire bill before deciding how they would vote. The bill is expected to undergo changes before a final version comes to the floor. Sen. Majority Leader Mitch McConnell, R-Ky., has said he wants to hold a final vote before the Senate breaks for its July Fourth recess. A vote is expected next week.

It remained unclear Thursday if the bill could pass without significant changes. By midday, reports began circulating on Capitol Hill that at least three Republicans planned to announce their opposition to the bill.

“Obviously, we have a lot to look at,” Murkowski said Thursday.

Left: Senate Majority Leader Mitch McConnell is trailed by reporters as he walks to the Senate floor of the U.S. Capitol after unveiling a draft bill on healthcare on June 22, 2017. Photo by REUTERS/Kevin Lamarque

‘We are not letting down our guard.’ COVID-19 is another challenge for U.N. peacekeepers

Biden says he would push for less U.S. reliance on nuclear weapons for defense

Ginsburg’s body will lie in repose at Supreme Court