Why Sen. Jeff Sessions’ record in Alabama could complicate his confirmation

At his confirmation hearing this week, Sen. Jeff Sessions will face tough questions about his 20-year tenure in the Senate. But he’ll also be pressed on his record before he entered Congress, when he served as U.S. attorney and Alabama’s attorney general.

Over the past several weeks, as supporters and opponents of the 70-year-old Alabama Republican sharpened their arguments, two strikingly different portraits of the man have emerged.

To some, Sessions is a beloved public servant who has represented his constituents faithfully and has the utmost respect for the law.

“He is a world-class legal mind and considered a truly great Attorney General and U.S. Attorney in the state of Alabama,” President-elect Donald Trump said last November, when he announced Sessions’ nomination to head the Department of Justice. “Jeff is greatly admired by legal scholars and virtually everyone who knows him.”

But to others, Sessions is a stumbling block to progress— a man who has argued in court against civil rights, demeaned black aides in his office, and spoken out forcefully against immigration reform.

The Southern Poverty Law Center went so far as to call him the “champion of anti-Muslim and anti-immigrant extremists.” Last week, six people, including NAACP President Cornell Brooks, were arrested during a sit-in protest in Sessions’ Mobile, Alabama office.

And in an extraordinary move last week, more than 1,200 faculty members, from 176 law schools in 49 states, signed a letter opposing Sessions’ candidacy for attorney general. They expressed concerns about his stance on mass incarceration, climate change, women, the LGBTQ community, immigration and civil rights.

Specifically, the faculty members cited Sessions’ 1986 federal judgeship confirmation, in which he was accused of calling a black colleague “boy” and joking about the Ku Klux Klan. President Ronald Reagan had tapped Sessions to serve as a federal judge, but these comments and the controversy they stirred led the Senate Judiciary Committee to vote to reject his nomination.

“Nothing in Senator Sessions’ public life since 1986 has convinced us that he is a different man than the 39-year-old attorney who was deemed too racially insensitive to be a federal district court judge,” the letter said.

Who Jeff Sessions was before that controversial 1986 hearing depends on who you ask.

Peter Nunez, who knew Sessions from their time as U.S. attorneys in the Reagan administration, described him as “modest” and called efforts to discredit his record a “smear campaign.”

“Who Jeff Sessions was before that controversial 1986 hearing depends on who you ask.”

“I find it totally unlike anything I’ve known about Sen. Sessions,” Nunez said. “He’s a strong advocate for the rule of law, who is trying to do what’s best for the country.”

Nunez is now the chairman of the board at the Center for Immigration studies, a think tank that advocates policies that allow for fewer immigrants but “affords a warmer welcome for those who are admitted,” according to the organization’s website.

“I have full confidence that he’s the man to lead the Department of Justice,” Nunez said.

Not surprisingly, as an attorney practicing in the Deep South, Sessions’ early career in Alabama was marked by racially-charged cases.

As U.S. Attorney for the Southern District of Alabama — a position Sessions held from 1981 to 1993 — his office prosecuted two members of the KKK for murdering a young black man, Michael Donald, in 1981. One of the men received the death penalty.

Four years later, Sessions prosecuted three African-Americans in Perry County for voter fraud. The men, who were later acquitted, became known as the “Marion Three.” The case was a flashpoint in debates over voting rights, and Sessions’ critics still point to it more than 30 years later as a proof of his efforts to suppress minority voter turnout.

Sessions’ supporters have long argued that the prosecution wasn’t racially motivated, because the initial complaints about voter fraud that led to the case came from local black officials.

The questionnaire Sessions completed for his nomination as the nation’s top law enforcement official reiterated that view.

Sessions wrote that African-American candidates told the district attorney that an election was being stolen from them because a large number of absentee ballots were being collected. The district attorney, who was white, then brought the case to Sessions.

Hank Sanders, a Selma-based lawyer at the time who focused on civil rights in the 1980s, saw it differently. Sanders said the case gained visibility after white officials became involved.

“I was in Perry County when blacks complained that whites were voting for dead people on absentee ballots and nothing was done,” he said. “But when whites complained, they threw everything in except the kitchen sink.” 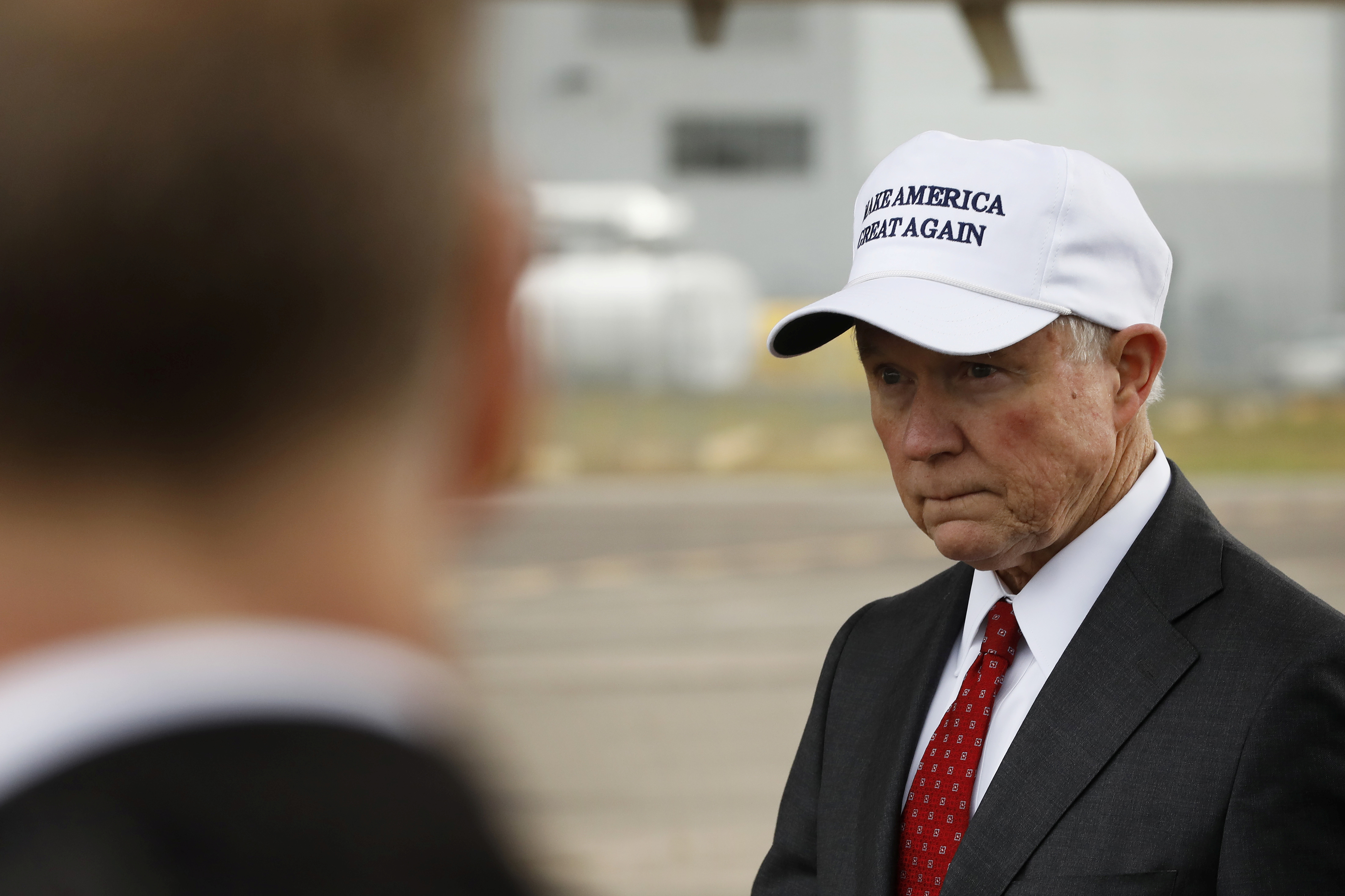 Senator Jeff Sessions waits for President-elect Donald Trump to exit his plane after arriving for a stop on his USA Thank You Tour event in Mobile, Alabama last month. Photo by REUTERS/Lucas Jackson

Sessions’ two years as attorney general of Alabama, from 1995 to 1997, were also marked by tension over race-related issues. Sessions defended the state’s education funding model, which opponents argued gave nearly twice as much money per student to those in more affluent, white neighborhoods as it did to students in poorer, largely minority communities.

William Smith, the former chief counsel for Sessions on the Senate Judiciary and Budget Committees, said Sessions was only doing his duty.

In addition to his legal record, Smith, who is black, said his own interactions with Sessions over the more than dozen years he has worked with the senator have been only positive.

“When I would go over to talk to him late in the afternoon about upcoming legislation, he might spend more time with me talking about my personal life to make sure my life was going well, because he simply cared about how I was doing,” Smith said.

Smith cautioned people who have not spent much time with Sessions not to pass character judgments.

“What’s been left out of [the] national conversation is that everyone bringing up attacks against him don’t know him,” Smith said. “They don’t like his policy points of view, but he’s not a racist.”

Nonetheless, accusations of racism have dogged Sessions ever since the 1986 confirmation hearings. At the hearings, civil rights attorney Gerry Hebert famously testified that Sessions called the NAACP and ACLU “un-American” and “communist-inspired.”

“Those were things that showed to me racial insensitivity,” Hebert said in an interview, recalling his testimony. Hebert said he was initially reluctant to testify, because he had a good working relationship with Sessions.

When working on cases for the Justice Department in Alabama, Hebert said he would set up shop in Sessions’ U.S. attorney’s office. The two had several cordial interactions over coffee, Herbert said. But in the end, he said he decided he had to speak out about what he heard, and the Senate chose not to confirm Sessions.

Today, there is little chance Sessions won’t be confirmed as attorney general. Ahead of his Sessions’ confirmation hearing on Tuesday, only one senator, Sen. Sherrod Brown, D-Ohio, has explicitly said he would not vote for Sessions.

But that doesn’t mean Sessions won’t face intense criticism — from old and new foes alike — when he comes before his colleagues on Capitol Hill.

Hebert has not spoken to Sessions since the judgeship hearing, but he said he thinks Sessions’ views have hardened over the years.

He pointed to Sessions’ votes in the Senate against hate crime bills, the Violence Against Women Act, and Loretta Lynch’s nomination to be attorney general, and his comments that Obama nominees had “ACLU DNA.”

“If someone called me a racist in 1986, I would have gone forward and made sure I had a record, so that if I was nominated today, I could say, ‘You were wrong,’” Hebert said. “For him to continue to use terms like that shows me he hasn’t grown.”