A men’s congressional baseball practice in Alexandria, Virginia was attacked by a gunman Wednesday morning and several people were shot, including Majority Whip Steve Scalise and law enforcement officers, according to the Associated Press. A suspect in the shooting has died from injuries, President Donald Trump said Wednesday in a statement from the White House.

Scalise was transported to MedStar Washington Hospital Center and is in critical condition, according to this Tweet.

Rep. Scalise was critically injured and remains in critical condition. The other patient is in good condition.

Rep. Roger Williams confirmed on Twitter that Zack Barth, a staffer in Williams’ office, was also among those shot.

Alexandria Police Chief Michael L. Brown said that police received a call of an active shooter at 7:09 a.m. and that officers responded to the scene, just south of Washington, D.C., in three minutes. Two officers engaged in gunfire, and five people were transported to local hospitals.

Brown said it was “a stable situation at this point. … We consider this incident to be a closed incident under investigation.”

A government official identified the suspect as James T. Hodgkinson of Illinois, AP reported. Sen. Berne Sanders said in a statement that he was told the suspect “apparently volunteered on my presidential campaign.”

“I am sickened by this despicable act,” the statement said. “Let me be as clear as I can be. Violence of any kind is unacceptable in our society and I condemn this action in the strongest possible terms. Real change can only come about through nonviolent action, and anything else runs against our most deeply held American values.”

Republican Rep. Jeff Duncan (R-S.C.) told reporters that he believes he may have spoken to the man who opened fire, based on images of the man on TV. Duncan said he was leaving practice early when the man approached him and asked: “Excuse me, sir, who’s practicing today? Democrats or Republicans?'”

Witnesses told the NewsHour’s Lisa Desjardins that they heard a loud boom, followed by many more. Members of the baseball team ran, dropping gloves and equipment and jumping over fences to get away from the shooter.

According to witnesses, law enforcement yelled “Put down the gun!”

Sen. Rand Paul told CNN the shooter fired at least 50 times and that “nobody would have survived without Capitol Hill police. They saved everybody’s life.”

Flake also told reporters that Rep. Joe Barton’s son, who is 10, had been at practice at the time of the shooting. “We got him in the dugout and put him under the bench,” he said. 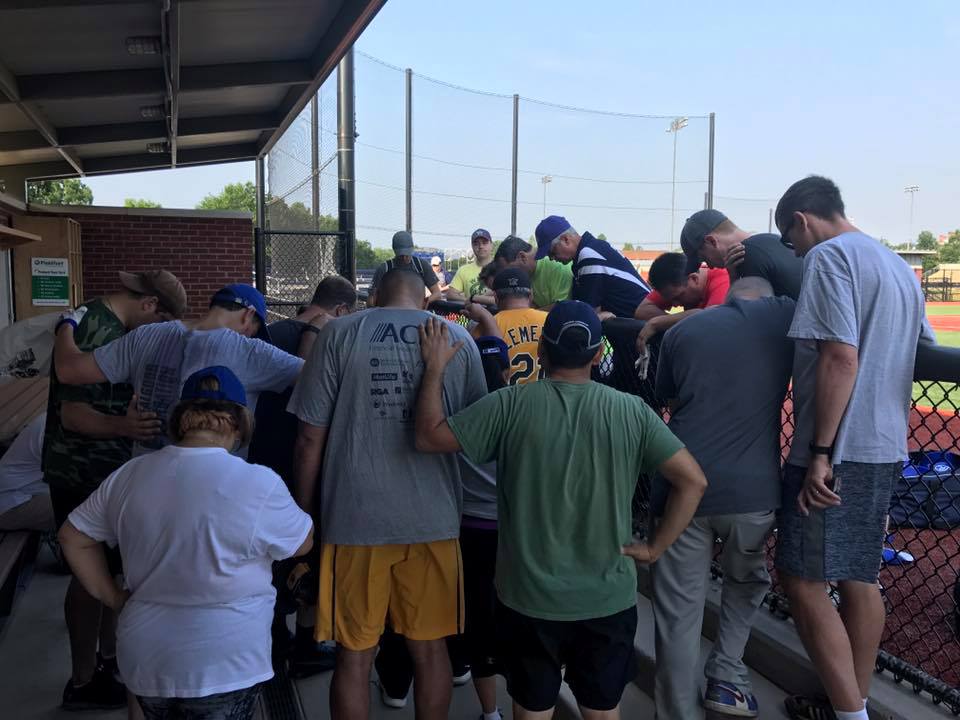 House Democrats prayed following reports that House Majority Whip Steve Scalise and one of his aides were shot at a GOP congressional baseball practice in Alexandria, Virginia, on June 14.
“Me and my House Democrats colleagues saying a prayer for our House Republicans and Senate GOP baseball colleagues after hearing about this morning’s horrific shooting at their practice field,” said Rep Ruben Kihuen (D-NV), who posted the image. Photo by Ruben Kihuen/via Storyful

Brooks said Scalise was wounded in the hip, according to AP reports.

Joseph Miscavige, director of analytics for PBS Kids, tweeted from the YMCA next door on that the incident was “terrifying” but he is “sheltered in place & under lockdown.”

Active shooter situation during this mornings trip to the Y. Terrifying. Am ok. Sheltered in place & under lockdown. pic.twitter.com/iJs6fZpjiK

“The Vice President and I are aware of the shooting incident in Virginia and are monitoring developments closely. We are deeply saddened by this tragedy. Our thoughts and prayers are with the members of Congress, their staffs, Capitol Police, first responders, and all others affected.”

The president also sent out this statement via Twitter:

Rep. Steve Scalise of Louisiana, a true friend and patriot, was badly injured but will fully recover. Our thoughts and prayers are with him.

Karen & I are praying for @SteveScalise, the Capitol Police, & all hurt for a speedy recovery. Our hearts are with them & their loved ones.

Alexandria Mayor Allison Silberberg said in a statement, “There has been an unthinkable shooting in our city this morning. Our thoughts and prayers are with Congressman Steve Scalise and other shooting victims, who were simply enjoying a baseball practice early this morning.”

The Congressional Baseball Game for Charity is scheduled for Thursday at Nationals Park. This video by Storyful shows a Medevac chopper arriving at Wednesday’s practice.

Scalise had recently told Roll Call he was excited for the upcoming game on Thursday.

All House votes have been canceled today, according to Scalise’s office. That includes a vote on the Sportsmen Heritage and Recreational Enhancement Act, or SHARE Act, which would ease restrictions for purchasing gun silencers.

Rep. Ryan Costello, who has played in the charity game for two years, said in a statement he had missed his ride to practice “by 2 minutes” on Wednesday.

“We now know a gunman fired shots at practice this morning. While I am fine, I am praying for my colleagues, Majority Whip Scalise, police, and staff,” the statement said.

Our thoughts and prayers are with the Congressional Baseball team and staff. This morning's actions have no place in our country.

Left: Investigators gather near the scene of an opened fire June 14, 2017 in Alexandria, Virginia. Multiple injuries were reported from the instance, including House Majority Whip Steve Scalise, R-LA. Photo by Alex Wong/Getty Images