Donald Trump’s immigration speech in Phoenix on Wednesday served up a buffet of red meat for his supporters, with talk of detention, deportation, clamping down on so-called “sanctuary cities” and blocking some nationalities altogether.

But what was new? A few, strikingly important things.

“I am going to create a new special deportation task force, focused on identifying and removing quickly the most dangerous criminal illegal immigrants in America.”

“Our enforcement priorities will include removing criminals, gang members, security threats, visa overstays, public charges – that is, those relying on public welfare or straining the safety net.”

This is a key change or clarification from Trump. What he once described as a “deportation force” is now a “deportation task force.” And most importantly, the candidate is making it clear that this task force would target specific groups of undocumented immigrants: criminals, visa overstays or those on public welfare. Otherwise, he notably says he is not targeting those without criminal records.

Which raises the question, what is Trump’s plan for those people? He offered the next quotes, which seem to point in opposite directions.

2. What To Do With Most Undocumented Immigrants

“For those here today illegally who are seeking legal status, they will have one route and only one route: to return home and apply for re-entry.”

“When we have accomplished all of our enforcement goals, and truly ended illegal immigration for good, including the construction of a great wall, and the establishment of our new lawful immigration system, then and only then will we be in a position to consider the appropriate disposition of those who remain.”

Trump is trying to thread a needle here and say something appealing to each side of the immigration debate. But what does it mean?

Trump would not allow undocumented immigrants to have any legal status while living here. They would remain in the shadows, unlawful. But — and this is the new, “softer” position — as long as they follow other laws, he would not forcibly remove them. Instead, once the border is secure and his enforcement system is in place, he would “consider” the status of “those who remain.”

It is a combination of some of the most conservative ideas on immigration and some of the compromise plans (see “Gang of 8”) that proposed a legal status only once the borders were secure and the visa system improved. (Trump and other conservatives strongly disavowed the Gang of 8 proposal.)

“Not everyone who seeks to join our country will be able to successfully assimilate. It is our right as a sovereign nation to choose immigrants that we think are the likeliest to thrive and flourish here.”

This is a new piece of the Trump Doctrine. In two sentences, Trump outlines two noteworthy beliefs: 1) Successful immigration policy aims for assimilation into American culture and 2) the U.S., and all nations, have the right to choose immigrants; immigrants do not make the final choice. 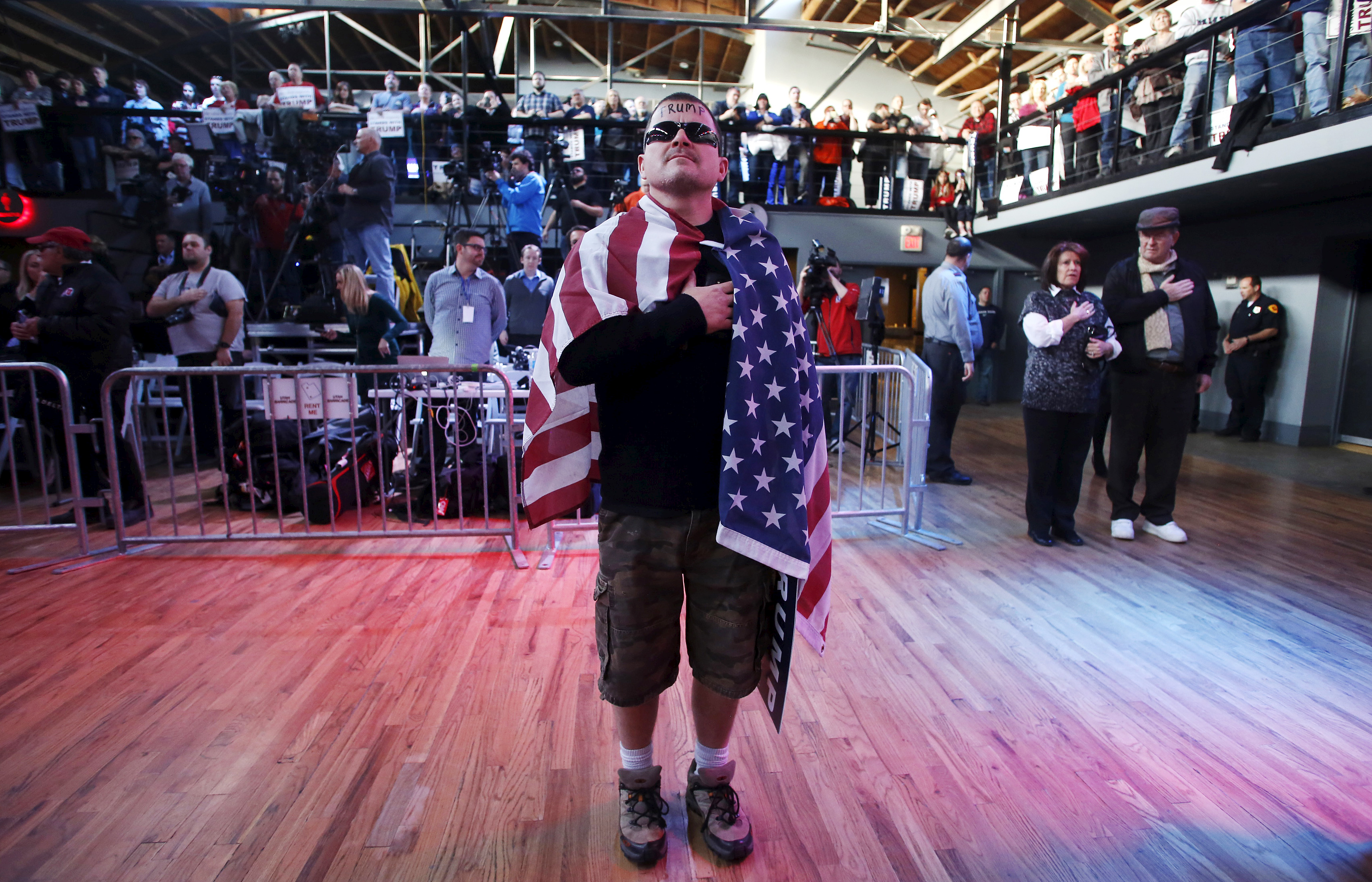 A Trump supporter wears an American flag at a campaign rally in Salt Lake City, Utah in March. Photo by Jim Urquhart/Reuters

4. Hot and Cold Toward Undocumented Immigrants

“While there are many illegal immigrants in our country who are good people, this doesn’t change the fact that most illegal immigrants are lower-skilled workers with less education who compete directly against vulnerable American workers.”

This is a fascinating quote, containing two seemingly paradoxical thoughts from the past week. Trump has said he is “hardening” his immigration stance and other times he has insisted he’s “softening” it.

Here, the GOP nominee goes out of his way to say he thinks many undocumented immigrants are good people (perhaps to soften his past words focused on rapists and criminals). But he is also defining them, toughly, as low-skilled, less-educated workers who are taking American jobs. It is a warm nod followed by a sharp rebuke.

5. Deport Them “Great Distances” Away

“Anyone who illegally crosses will be detained until they are removed and go back to country from which they came. And they will be brought great distances, we are not dropping them right across.”

This was not in Trump’s prepared remarks. The planned speech contained only “anyone who illegally crosses will be detained until they are removed out of our country.” But looking out at the Phoenix crowd, Trump added that those deported will go back to their original country, and it will be a “great distance” from the U.S. border. Trump referenced the 1954 deportation plan under President Eisenhower known as “Operation Wetback,” not for the first time. What was new? The specific pledge to take deportees to home countries and “great distances” away.

“The time has come for a new immigration commission to develop a new set of reforms to our legal immigration system in order to achieve the following goals: To keep immigration levels, measured by population share, within historical norms. To select immigrants based on their likelihood of success in U.S. society, and their ability to be financially self-sufficient.”

Trump previously proposed a temporary freeze on all green cards, but this is much broader. The GOP candidate would lower the amount of all legal immigration to the U.S., which is currently at historic highs relative to population. And he would select immigrants based on measures of personal and financial ability. Trump has not offered which specific metrics he would use or who would determine them. But his words imply that, at least, some refugees may have a more difficult path than currently. Metrics aside, he is clearly calling for a more closed, more selective immigration system.