GEORGETOWN, S.C. — Industrial jobs have sustained Frederick Ford’s family for generations in coastal South Carolina. His grandfather worked at the steel mill in Georgetown, his uncle worked at a nearby paper mill, and Ford is working as a unit operator at the local power plant, a job he hoped to retire from. But at 46, his plan has been upended.

The state-run utility is closing the Winyah Plant where he works — one of its two remaining coal-fired power stations. The move is forcing the small waterfront community to confront the challenges inherent in the shift from fossil fuels to clean energy — a shift at the center of the conversation on climate change and economics playing out in the Democratic presidential primary race.

Do we try to recruit more heavy industrial jobs that pay good wages, but at a cost to the environment? Or do we go in a new direction?

The future holds “a lot of what-ifs,” Ford said in an interview with PBS NewsHour. The power plant has “always been here. It put a lot of bread on the table.”

Workers like Ford have some time to figure out their next steps, since the plant is closing in phases over an eight-year period. But the announcement has already set off a debate about Georgetown’s economic future that is familiar in factory towns across the county.

“Georgetown historically has always been blue collar,” said Andy Friedman, a financial adviser who runs the local business association. Going forward, “do we try to recruit more heavy industrial jobs that pay good wages, but at a cost to the environment? Or do we go in a new direction?”

On the 2020 presidential campaign trail, Democratic candidates have addressed the issue by making job creation a key part of their climate change plans. 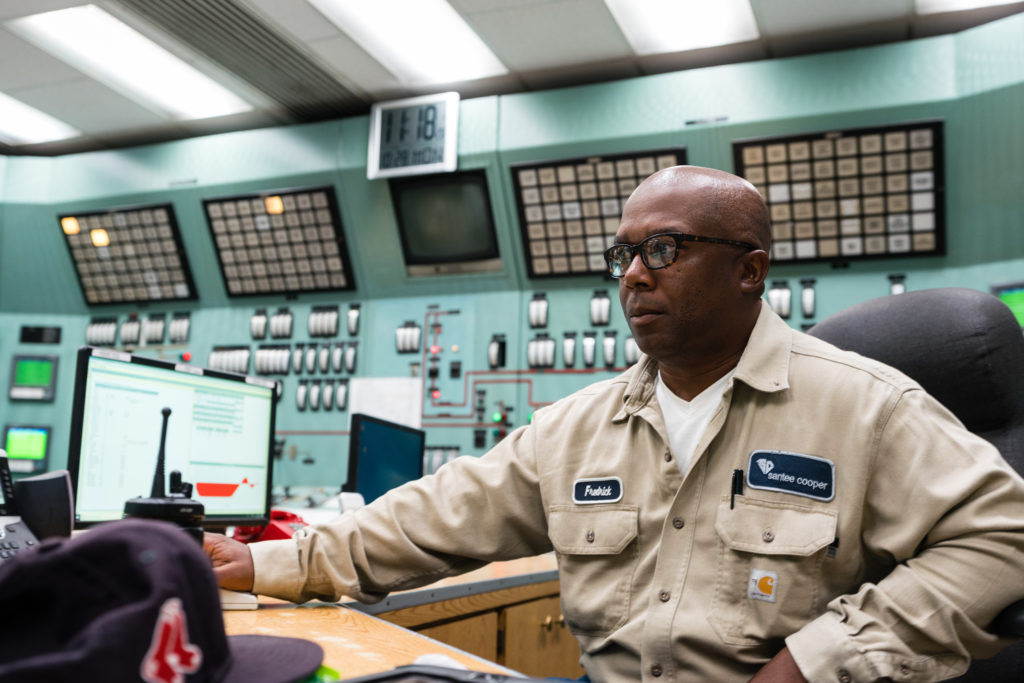 Frederick Ford has worked for the utility Santee Cooper for 13 years. The power plant has “always been here. It put a lot of bread on the table,” Ford said. Photo by Andy Hagedon

Former Vice President and 2020 hopeful Joe Biden has pledged to help displaced industrial workers through a “Task Force on Coal and Power Plant Communities.” Sen. Elizabeth Warren of Massachusetts has promised to create more than one million new jobs through a “Green Manufacturing Plan.”

Sen. Bernie Sanders of Vermont has arguably gone further than anyone else in the crowded primary field, with a plan that he says would generate 20 million new jobs. All of the leading candidates have called for creating a carbon-free economy by the year 2050 at the latest.

All of the leading Democratic presidential candidates have called for creating a carbon-free economy by the year 2050 at the latest.

Green New Deal-style plans have been derided by Republicans, and even some moderate Democrats, as progressive pipe dreams. In Georgetown, the Democrats’ sweeping proposals have been met with a mixture of skepticism and open hostility.

“It’s too radical and there’s too many promises that can’t be kept,” said David Kossove, a small business owner. “Can you gradually go in that direction? I think you can. But it can’t be done so quickly.”

Brendon Barber, Georgetown’s mayor, argued that the city of 9,100 can’t turn its back on its blue-collar roots. The steel mill, which is owned by the international conglomerate Liberty Steel, is a glaring reminder; it looms at one end of the city, and can be seen from a harbor walk lined with restaurants and small businesses offering ecotourism-themed river boat rides.

Georgetown also needs to adapt to the changing times, said Barber, a Democrat. “We can’t go backwards to the ‘60s or ‘70s or ‘80s. We want to move forward,” he said.

On a recent tour of the plant, the presidential election — and the debate around the city’s past and future — took a backseat to the everyday work of generating electricity.

Technicians in hard hats made repairs to one of the plant’s four turbine units. A supervisor in the control room watched over panels of brightly colored buttons. Outside, trucks ferried coal ash and other material around the site, which is nestled in a secluded stretch of woods outside the city limits.

The plant, which is operated by Santee Cooper, the state-run utility, has been in operation since 1975. It currently generates, on average, 300 megawatts of electricity from coal that’s transported by train to the plant from mines in West Virginia and Illinois. 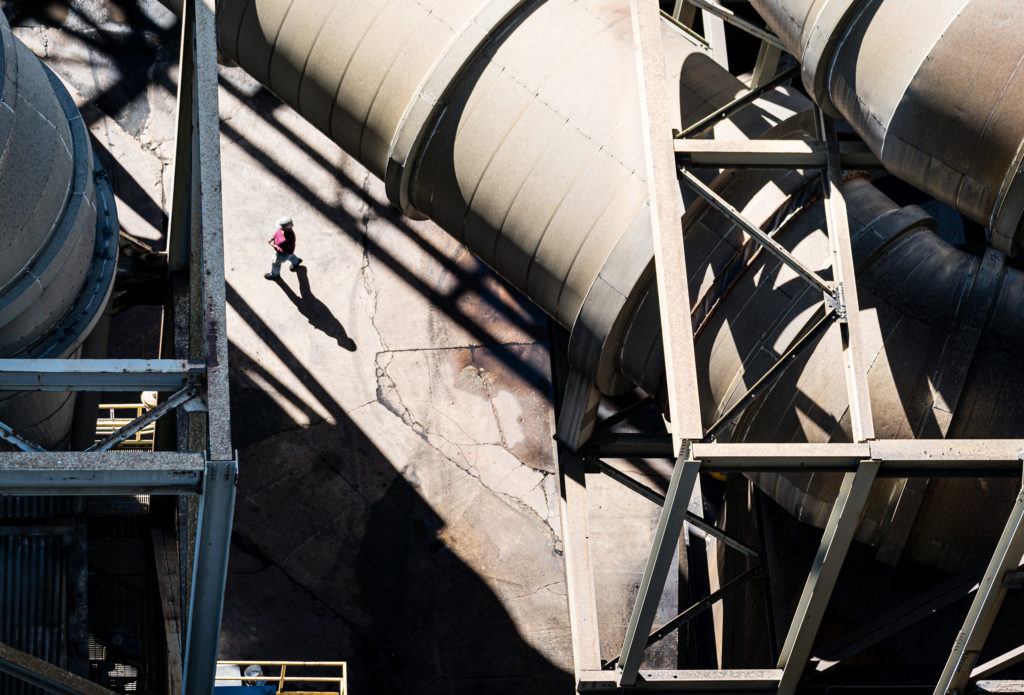 2020 Democratic presidential candidates have made job creation and central part of their plans to shift the country from fossil fuels to renewable energy. Photo by Andy Hagedon

In August, Santee Cooper CEO Mark Bonsall announced the plant would close by 2027, as part of a push to reduce the utility’s reliance on coal-fired power. Santee Cooper currently generates 46 percent of its power from coal. The decision was the latest in a series of changes by the utility, which has been under fire for a failed nuclear power plant deal that left ratepayers on the hook for billions in increased fees.

Soon after announcing the Winyah Plant closure, Santee Cooper released a study on its long-term energy outlook that included an increase in renewable energy generation. But the utility’s future remains unclear: next year, the state legislature will consider whether to keep it intact, bring on new management, or put it up for sale to investors.

A spokesperson for the utility said it was committed to avoiding layoffs at the Winyah Plant. Santee Cooper will instead relocate workers who wish to stay with the utility to jobs at other facilities, said Mollie Gore, the utility’s communications director. It’s too early to know where those jobs would be, or how the relocation process would work.

Gore also said Santee Cooper was developing a plan to retrain workers for jobs in renewable energy, but said the details of the program had not yet been worked out. “We need to honor the work of employees there, and also look for and provide any opportunity we can for retraining and relocations,” Gore said.

The leading Democratic presidential contenders have offered some solutions. Biden’s task force on coal and power plant communities would use a combination of public and private investment to spur job growth in areas dependent on the fossil fuel industry. Additionally, the plan calls for job retraining programs in partnership with community colleges and unions. In a statement to the NewsHour, the Biden campaign noted that replacing high-paid jobs in the coal sector with low-paying work in other fields wasn’t a long term fix for the problem.

The Warren campaign said it was committed to “providing job training and guaranteed wage and benefit parity for workers transitioning into new industries.”

Sanders, another Democrat near the top of the pack in early polling, has also focused on retraining workers for jobs in clean energy, as well as for jobs building new, environmentally friendly infrastructure and retrofitting old buildings to make them more energy efficient.

Democrats in South Carolina argued the candidates’ message provided a clear contrast with President Donald Trump, who has dismissed the threat of climate change. “We can’t do what we’re doing now and call everything a hoax and just hope it gets better,” said State Sen. Ronnie Sabb, a Democrat who represents the Georgetown area.

Voters and state lawmakers in deep red South Carolina are more receptive to progressive energy policies than they were in the past, said Matt Moore, a former chairman of the South Carolina Republican Party. Earlier this year, for instance, the Republican-controlled state legislature unanimously passed a bill promoting solar energy production. 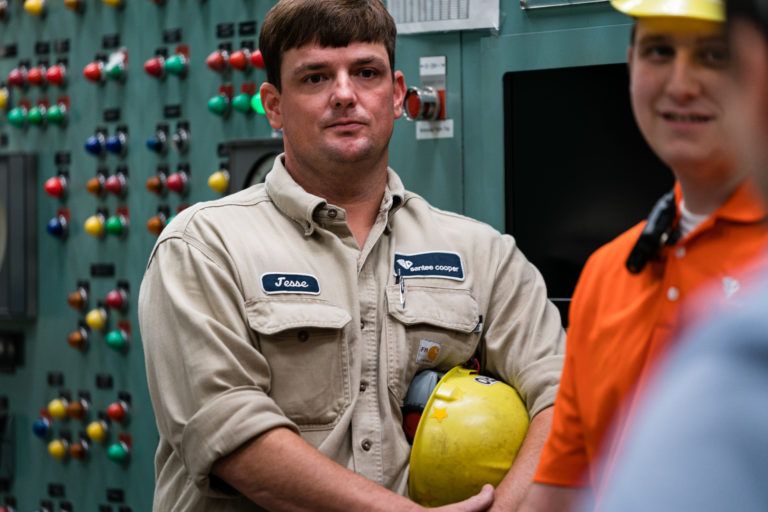 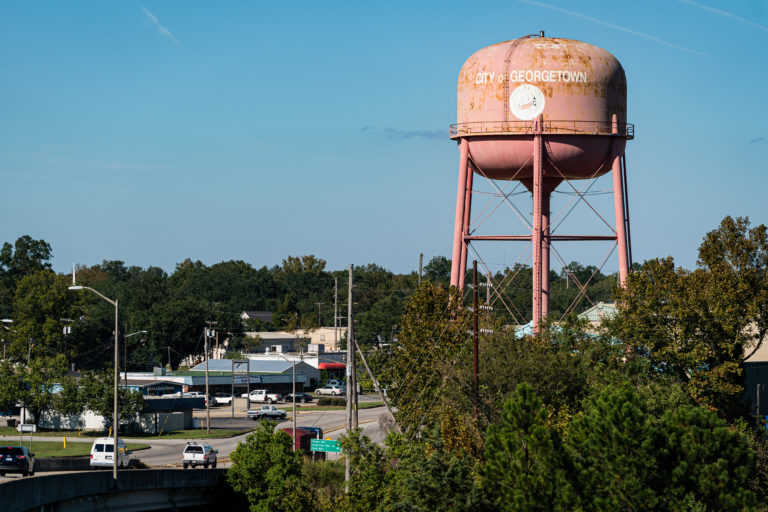 Left to right: Left: Winyah Plant workers Jess Brantley, left, and Matt Rabon take part in a tour of the facility. Right: Georgetown’s economy has been dependent for decades on heavy industry and manufacturing. Photos by Andy Hagedon

“Energy is one of the few issues in South Carolina where there’s broad bipartisan agreement,” said Moore, who chairs a conservative solar energy organization in the state. When presidential candidates “propose something that’s going to require huge tax increases or regulatory action, the bipartisan consensus could fall apart.”

Moore added, “I think voters across the political spectrum are watching this race unfold with a healthy dose of pragmatism about what’s possible and what might be a dream.”

At the coal-fired power plant in Georgetown, workers steered clear of discussing the 2020 election. The spokesperson for Santee Cooper, citing its status as a state-run utility, also declined to comment on specific energy proposals put forth by presidential candidates.

But several workers said the decision to close the plant highlighted the changes reshaping the nation’s energy landscape.

“We definitely need to have balanced energy. We don’t want to put all of our eggs in one basket,” said Matt Rabon, an electrical engineer at the plant.

Rabon is 23 and at the very beginning of his career. He said he was confident that he could adapt and learn skills that could lead to a new job.

His older colleagues seemed less sure.

Ford, the Santee Cooper employee with deep family ties to the Georgetown area, recently bought a house a short drive from the power plant. Ford has worked for the utility for 13 years, and said the prospect of finding a new job was daunting. “I’m going to stick it out till the end, till they say no more.”

Above: South Carolina's state-run utility has announced plans to close the Winyah Plant, one of its two remaining coal-fired power stations. The move has sparked a local debate on energy policy that mirrors the climate change conversation in the Democratic primaries. Photo by Andy Hagedon