UPDATED May 17 at 6:25 p.m. | The Department of Justice has appointed former FBI Director Robert Mueller as special counsel to lead the agency’s investigation into Russia.

When Americans think of a special prosecutor, Kenneth Starr usually comes to mind. His investigation of President Bill Clinton in the 1990s led to the Monica Lewinsky scandal and impeachment proceedings, in the process turning Starr into a household name.

Two decades later, in the wake of James Comey’s firing, Democrats are calling for an independent investigation into the ties between Russia and President Donald Trump’s 2016 campaign. But special investigators lack much of the power and autonomy that Starr enjoyed in the Clinton era. Even if Democrats get their wish, an independent probe would have less power — and less independence — than many realize.

The 1977 law that created the role of the “special prosecutor,” placing few limitations on the length, cost or scope of independent investigations, expired in 1999. As a result, that option is effectively off the table, unless Congress reauthorizes the law or passes a new one. Neither scenario seems likely right now, with Republicans in control of Congress and Mr. Trump in the White House.

According to legal experts, the next best option for Democrats seeking an outside probe is for the Department of Justice to appoint a “special counsel” — an investigator with less freedom than a “special prosecutor,” and whose investigation could be curtailed or stopped altogether at any time by the Trump administration.

The titles are often used interchangeably, even by members of Congress. But their differences are real and go beyond semantics, a point that has been largely overlooked in the clamor over Trump’s unexpected decision Tuesday to remove Comey from his post as the FBI director.

Even if Democrats get their wish, an independent probe would have less power — and less independence — than many realize.

If the Department of Justice appointed a special counsel to examine Trump’s connections to Russia, the investigator “would not be completely independent,” said Nathaniel Persily, a constitutional law expert at Stanford University.

“There are Department of Justice regulations for preserving autonomy, but none of that prevents the special counsel from being fired by Trump for any reason whatsoever,” Persily said.

The decision to appoint a special counsel would normally be made by the Justice Department’s top official, Attorney General Jeff Sessions.

But Sessions recused himself in March from any DOJ probe involving Trump’s 2016 campaign. Sessions, who served as an adviser to the campaign, made the announcement after several news organizations reported that he failed in his confirmation hearings to disclose his meetings with a Russian official during the election.

Sessions’ recusal means the final decision rests with Rod Rosenstein, the deputy attorney general, who was confirmed by the Senate just two weeks ago. The guidelines Rosenstein would need to follow are spelled out in Chapter 6 of the Code of Federal Regulations. 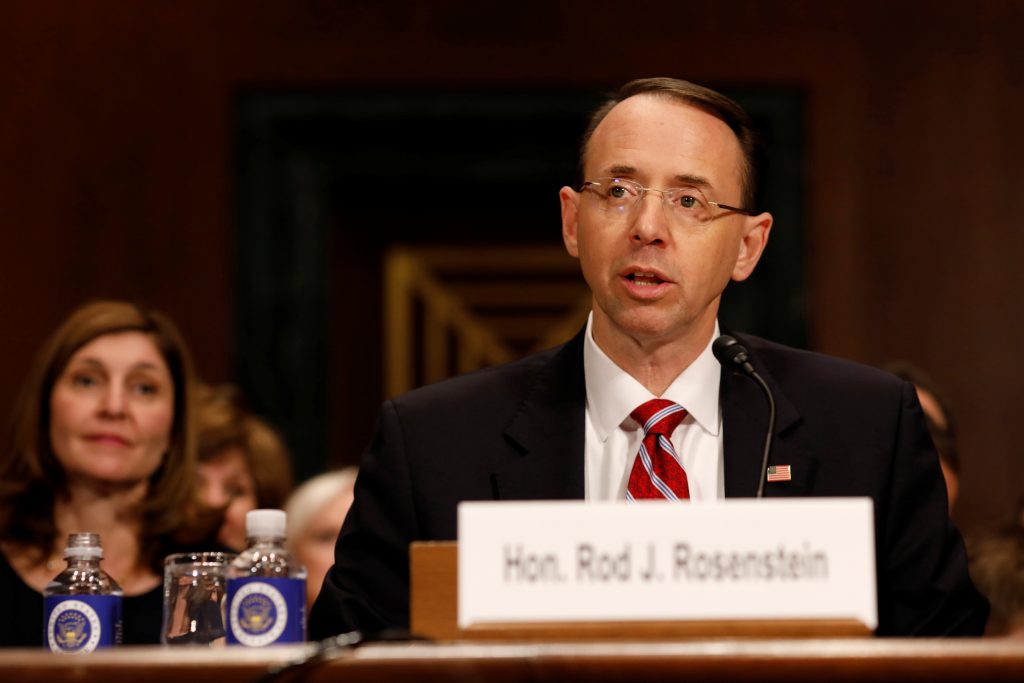 Rod Rosenstein testifies before the Senate Judiciary Committee on March 7, 2017. He was confirmed as deputy attorney general in April. Photo by REUTERS/Aaron P. Bernstein

The final decision is “unreviewable,” according to the Center for Legal and Economic Studies.

If a special counsel is appointed, the person receives the authority of a U.S. attorney to carry out the investigation. But the rules give the Justice Department’s top official final say over the scope and jurisdiction of the inquiry, and the authority to remove the special counsel essentially at will.

Compared to the law that expired in 1999, the current federal rule gives the attorney general, or his deputy in the event of a recusal, “much wider discretion in deciding whether to appoint an independent prosecutor and gives the [attorney general or deputy] much greater influence over the investigation,” the Center for Legal and Economic Studies found.

Under the old law, the attorney general was required to submit a request for appointing a special prosecutor to a three-judge panel, which made the final decision. The panel was also called in to decide if the investigation should be expanded.

Congress included a sunset provision in the law, which caused it to lapse in 1999, to maintain the option of ending the independent investigation system after a trial period if it proved not to work, several legal experts said. The law was reauthorized by Congress and signed by several presidents — including President Bill Clinton — after its passage in the years after Watergate.

But while the law gave special prosecutors independence from the Justice Department, it also provided leeway for investigators to carry out expensive, open-ended probes. Kenneth Starr’s special prosecution of the Clinton White House grew over several years, ultimately leading him to uncover the Monica Lewinsky scandal that nearly ended Clinton’s presidency.

Comey’s firing this week resurrected the debate over independent investigations, and how much power and autonomy a special counsel should have under the existing guidelines.

“A special counsel would have a lot of power,” said Michael Greenberger, a professor at the University of Maryland School of Law who served in the Justice Department under Clinton. The person would still “have a grand jury and will get to the bottom of it, if he or she is inclined to get to the bottom of it.” 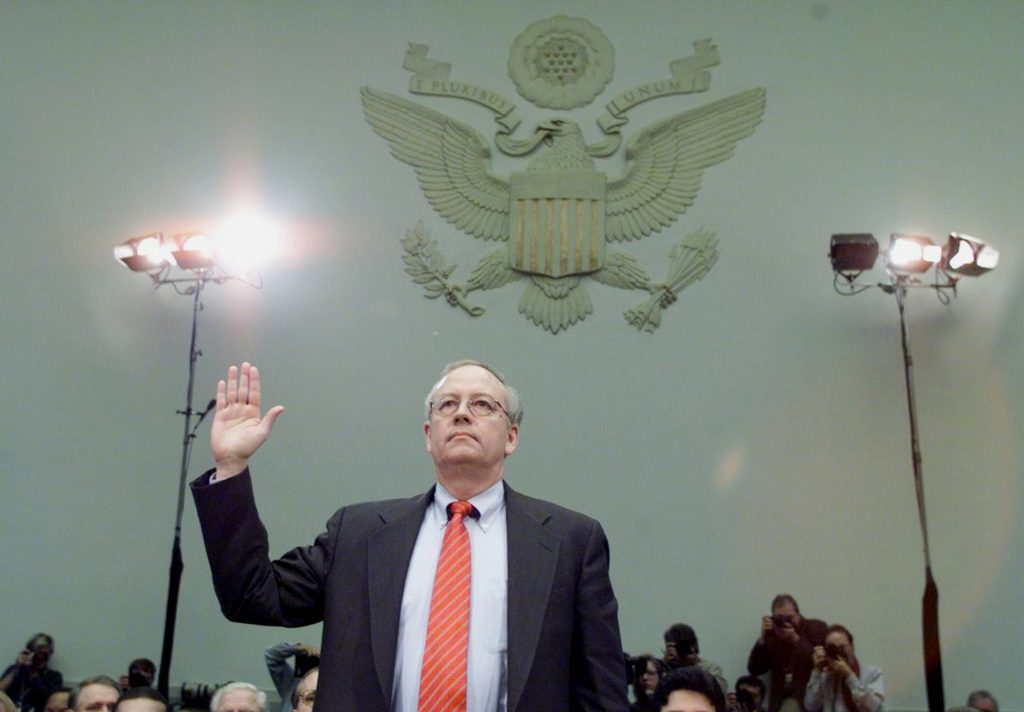 Kenneth Starr swears in before testifying on Nov. 19, 1998, at the House Judiciary Committee hearings on whether to impeach President Clinton. (Photo by Harry Hamburg/NY Daily News Archive via Getty Images)

Michael Gerhardt, the National Constitution Center’s scholar in residence, said Rosenstein’s pick for special counsel will determine whether the investigation — if it takes place — is viewed as independent or not.

Depending on the selection, critics could raise concerns that “in making the appointment, certain concessions get made or promises could get made” by the incoming counsel that would limit the nature of the investigation, said Gerhardt, a constitutional law expert at the University of North Carolina at Chapel Hill.

Others dismissed that scenario. Rosenstein, who served as the United States Attorney for the District of Maryland before Trump tapped him to become the deputy attorney general, would choose an investigator with a reputation for independence and a willingness to ignore political pressure from the White House to reach a certain conclusion, said Greenberger, who has known Rosenstein for years.

Appointing a special counsel is a “test of respectability,” he said. “I do know Rod well enough [to have confidence] he would make a good faith effort to find someone who is a prominent, square shooter.”

Appointing a special counsel is a “test of respectability.”

The stakes are high for both the White House and Rosenstein, who found himself at the center of the controversy over Comey’s firing this week.

The White House has said that Trump acted on their advice in firing Comey, who became just the second FBI director in the bureau’s history to lose his job. Trump said that the firing had to do with Comey’s role in the Clinton email case.

Yet there is ample evidence that Trump was motivated by Comey’s insistence on carrying out an independent investigation into his campaign’s alleged collusion with Russia. Just days before he was fired, Comey asked the Department of Justice for more resources for the FBI’s investigation into the Trump-Russia connection.

U.S. intelligence agencies believe the Russian government interfered with the 2016 election in order to help Trump get elected. Several Republicans said they were troubled by the timing of Comey’s firing. Senate Democrats have condemned Trump’s decision. Minority Leader Chuck Schumer called it a “cover-up,” and Sen. Richard Blumenthal, D-Conn., predicted Wednesday that the firing “may well produce impeachment proceedings.”

Congress has also launched multiple investigations into the issue, in addition to the FBI probe. Opponents of an independent investigation have said that the congressional and FBI probes are sufficient to get to the bottom of the Trump campaign’s ties to Russia.

But the criticism of Trump — and Rosenstein — increased on Thursday as the fallout from Comey’s firing continued. Sen. Dianne Feinstein, D-Calif., the senior Democrat on the Senate Judiciary Committee, said that Rosenstein’s letter about Comey’s conduct had the feel of a “political document” and appeared to be “hastily assembled to justify a preordained outcome.”

As the calls for an independent investigation continue, some in the legal community argue that the distinction between a special counsel and special prosecutor is overblown. In the end, “the name doesn’t matter,” said Peter Wallison, who served as White House counsel to President Reagan from 1986 to 1987. “The question is, will the special counsel really be independent of the Justice Department?”

Left: Senator Mark Warner, D-VA., speaks to reporters at the U.S. Capitol on May 10, 2017. Warner and other Democrats are calling for a special prosecutor to investigate ties between Russia and President Trump's campaign. Photo by Joshua Roberts and Reuters