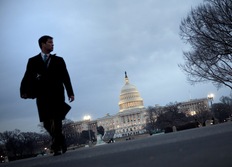 If you’ve been trying to keep track of Capitol Hill this week, you might be confused: Is the House considering President Obama’s budget? How much is being cut from the budget? And what is a CR?

What’s happening is that two different proposals for funding the federal government are being considered and debated at the same time – and both processes really got going on Monday.

President Obama unveiled his budget proposal Monday for fiscal year 2012, which doesn’t start until the end of September. The way the process usually works is that the Congress creates several separate bills that authorize government spending that could be similar or totally different from what the president requested.

But during the last Congress, which spent the lion’s share of its time passing the landmark health care reform legislation, that process was not completed. To keep the federal government running, Congress passed “continuing resolutions”or CR – temporary measures that keep the current level of funding so that Congress has time to work out a longer term spending plan.

The result is a very busy week for Congress: the current CR expires March 4, so Republican House leaders have introduced a new CR that also includes big cuts to spending for the remaining fiscal year. This more immediate bill being debated on the House floor is taking place at the same time President Obama unveils his comprehensive proposal and Congress holds hearings on it with members of the administration.

Again, the House is debating funding for the period of time from now through Sept. 30. The president’s plan, now being questioned in committee rooms across Capitol Hill, is a proposal for how to fund the government beginning Oct. 1 and going through September 2012.

In the short term, the debate over the CR has serious consequences for the country: If a new CR is not passed by March 4, the government won’t have any money to fund itself and will shut down. The House is debating a CR version that would cut some $60 billion in spending from March 4 to Sept. 30 – a number that likely will not be accepted by Senate Democrats, who hold a majority in that chamber.

To make time for the negotiations between the two chambers, yet another short term CR might need to be passed – which brings up another wrinkle: as time passes and the fiscal year gets shorter and shorter, Republicans set on cutting billions from the rest of the year’s budget will have a smaller pie to slice as money is spent.

The situation has made for a confusing swirl of numbers and figures all being dumped on the public at the same time.

The chart below helps explain the difference between the budget proposal and the Republican’s CR: