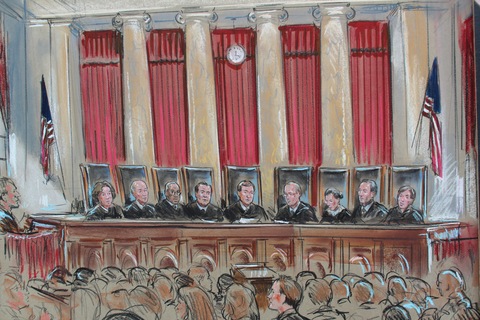 Watch Wednesday’s PBS NewsHour for more context and analysis on the two same-sex marriage rulings made by the Supreme Court. (Courtroom sketches by W. J. Hennessy)

In a pair of decisive victories for the gay rights movement Wednesday, the Supreme Court struck down a key section of the 1996 Defense of Marriage Act — a law defining marriage as “one man and one woman” and barring same-sex couples from collecting federal marriage-related benefits.

The Court’s majority, led by Justice Anthony Kennedy, found those provisions unconstitutional. The decision was 5 to 4.

“DOMA singles out a class of persons deemed by a State entitled to recognition and protection to enhance their own liberty,” Kennedy wrote. “DOMA’s principle effect is to identify a subset of state-sanctioned marriages and make them unequal.”

The court left intact a separate provision that lets a state refuse to recognize a same-sex union from another state.

The justices chose not to rule on Proposition 8, and found those behind the appeal had no “legal standing.” Justice John Roberts wrote, “We have no authority to decide this case on the merits and neither did the 9th Circuit Court of of Appeals.”

Declining to rule gave a second boost to same-sex unions, effectively clearing away any barriers for same-sex marriage in California.

Follow along for live reaction and analysis to the Supreme Court rulings on the United States v. Windsor and Hollingsworth v. Perry cases.