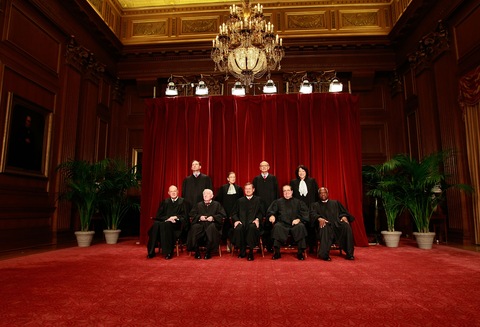 It’s late May, and the Supreme Court hasn’t yet reached its potentially blockbuster decisions on President Barack Obama’s Affordable Care Act or Arizona’s immigration law. But the justices’ recent actions still push ahead with legal interpretations for a modern America.

We spoke this afternoon with Marcia Coyle, our regular Supreme Court correspondent and Washington Bureau chief at the National Law Journal. She pointed out two cases — a decision on the entitlements of children conceived through artificial insemination, and a grant to hear a case about government wiretapping — that the court handled Monday.

MARCIA COYLE: Let’s start with the decision. The decision was a fascinating yet narrow case involving the intersection of law and modern reproductive technology. The case involved twin children conceived by Karen Capato through in vitro fertilization after her husband’s death from cancer.

Her husband had preserved his sperm after being diagnosed with cancer because he feared the cancer treatment would make him sterile. He and his wife wanted to add to their family. However, he died shortly afterwards and his wife conceived the twins about 18 months after his death. She applied to the Social Security Administration for survivors’ benefits for the children. She won in the lower federal appellate court, but the Social Security Administration appealed to the U.S. Supreme Court.

In the decision today, the justices examined the interplay of several sections of the Social Security Act. Although Robert and Karen Capato’s children met the definition of child under the act, the court unanimously found that they didn’t meet the act’s requirements for family status in order to qualify for survivor benefits. One of those requirements was whether the children could inherit under the intestacy law of their father’s residence [in Florida] at death. Florida’s law permits children born posthumously to inherit only if they were conceived during the father’s lifetime.

NEWSHOUR: So what’s the significance of this case? You mentioned it’s narrow, legally, yet still an interesting decision.

MARCIA COYLE: It’s narrow in the sense that the outcome here depended on the law of the state where the father lived when he died. For other children similarly situated, the outcome may depend on their state’s inheritance laws. There are reportedly more than 100 applications for survivor benefits pending with the social security administration from posthumously conceived children.

The court has increasingly been confronting cases that involve legal fallout from modern technology. Just this term, the justices examined the use of GPS technology by law enforcement to track potential criminals and the impact of that on a person’s Fourth Amendment rights.

NEWSHOUR: Is the wiretapping case also another uniquely modern one to come before the court?

In the case the court agreed to hear today, Amnesty International, human rights organizations, a group of lawyers, journalists and others want to challenge the constitutionality of 2008 amendments to the Foreign Intelligence Surveillance Act. Those amendments expanded the National Security Agency’s authority to conduct electronic surveillance of foreign nationals’ communications. Amnesty and the others fear that the wiretapping will capture confidential communications by American citizens.

The issue the justices have agreed to decide is whether Amnesty and the other challengers have what is known as standing to go forward with their lawsuit. That is can they show that they have been injured or will face imminent injury so as to be able to bring their lawsuit.

NEWSHOUR: So it sounds like this case won’t be heard by the court until next fall, in the beginning of next term. What are we waiting on before the court breaks for the summer?

MARCIA COYLE: I am watching five cases in particular. I’m just going to name the issues. They are challenges to the new federal health care law, to Arizona’s anti-immigration law, to the constitutionality of life in prison without parole for juveniles under 14 who commit murder. [We’re also watching] First Amendment challenges to the federal Stolen Valor Act and to the indecency regulations of the Federal Communications Commission.

NEWSHOUR: That sounds like two decisions with major political ramifications and three of general public interest. Could we see the court implementing some sweeping changes in June?

MARCIA COYLE: It depends, of course, on what the justices do with these cases. The health care and immigration cases obviously will have major implications for American policy and the ability of Congress to address national problems.

This is potentially a blockbuster term, even if those were the only two cases that the court addressed. But all five raise difficult issues, and the court traditionally hands down the most difficult cases in the final weeks of the term. The justices are on schedule to complete the term by the end of June. Stay tuned.

You can follow the NewsHour’s coverage of the court here.