Kennedy, whose vote is seen as pivotal, said marriage has been understood as one man and one woman for “millennia-plus time.” He said same-sex marriage has been debated in earnest for only about 10 years, and he wondered aloud whether scholars and the public need more time.

Chief Justice John Roberts said gay couples seeking to marry are not seeking to join the institution of marriage.

“You’re seeking to change what the institution is,” Roberts said.

The arguments offered the first public indication of where the justices stand in the dispute over whether states can continue defining marriage as the union of a man and a woman, or whether the Constitution gives gay and lesbian couples the right to marry.

The session was interrupted after about 30 minutes by a protester yelling loudly. He was removed by security.

Justice Antonin Scalia said the issue is not whether there should be same-sex marriage “but who should decide the point.” He expressed concern about the court imposing a requirement on the states that “is unpalatable to many for religious reasons.”

Justice Stephen Breyer asked if the nation needs more time to “wait and see” whether gay marriage is harmful to society. Bonauto responded that wait-and-see has never been considered a justification for discrimination under the Constitution. 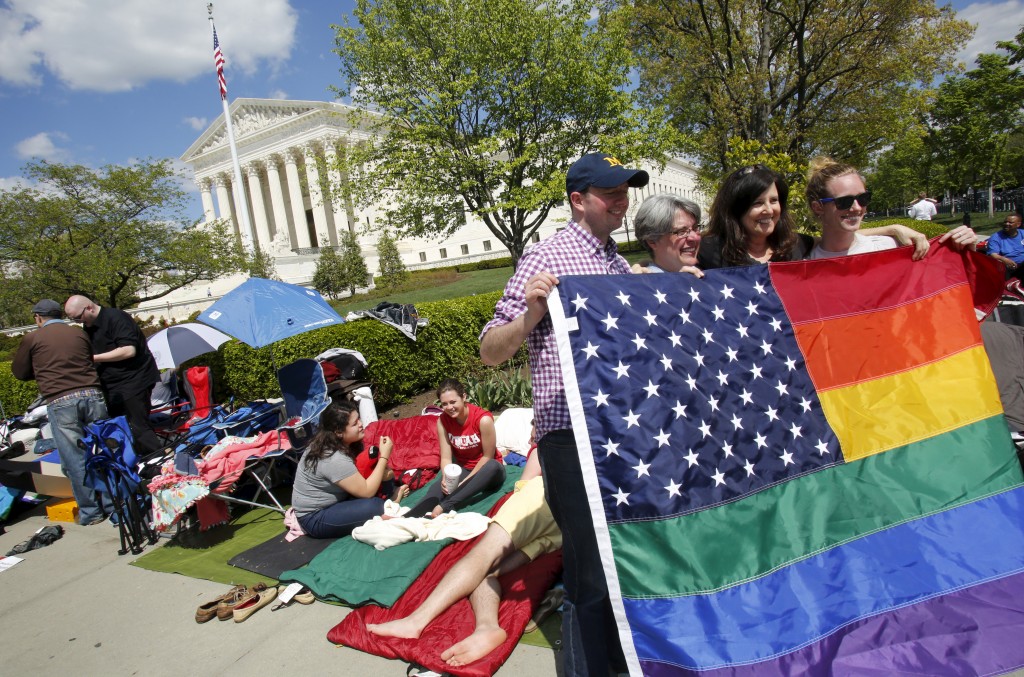 People lined up outside the Supreme Court Monday ahead of arguments focusing on gay marriage. Photo by Yuri Gripas/Reuters

The court was hearing extended arguments, scheduled to last 2½ hours, which also are exploring whether states that do not permit same-sex marriage must nonetheless recognize such unions from elsewhere. Same-sex couples now can marry in 36 states and the District of Columbia.

People on both sides of the issue gathered outside the marble courthouse early Tuesday. Some waved gay rights banners, while others carried placards proclaiming marriage as the union of a man and a woman.

“Homo sex is a sin,” read one sign. A man shouted into a microphone that gays violate the laws of God. A group of same-sex advocates tried to drown him out by singing “The Star-Spangled Banner.”

Cheers went up in the crowd when the court’s doors opened, allowing a lucky few who lined up days ago to get inside.

The cases before the court come from Kentucky, Michigan, Ohio and Tennessee, four of the 14 remaining states that allow only heterosexual marriage. Those four states had marriage bans upheld by the federal appeals court in Cincinnati in November. That is the only federal appeals court that has ruled in favor of the states since the Supreme Court in 2013 struck down part of the federal anti-gay marriage law.

Kennedy has written the court’s three prior gay rights decisions, including the case from two years ago. All eyes are on him for any signals of his intention this time.

It was barely a decade ago that the first state allowed gay and lesbian couples to marry. That was Massachusetts, in 2004. As recently as last October, barely a third of the states permitted it. Now, same-sex couples can marry in 36 states and Washington, D.C., a sign of the dramatic change in public opinion.

At the Supreme Court, the opposing states hoped to reframe the debate.

“This case is not about the best marriage definition. It is about the fundamental question regarding how our democracy resolves such debates about social policy: Who decides, the people of each state or the federal judiciary?” John Bursch, representing Michigan, wrote in his main brief to the court.

Other arguments by the states and more than five-dozen briefs by their defenders warn the justices of harm that could result “if you remove the man-woman definition and replace it with the genderless any-two-persons definition,” said Gene Schaerr, a Washington lawyer.

The push for same-sex marriage comes down to fairness, said Bonauto, who argued on behalf of the plaintiffs. The people who have brought their cases to the Supreme Court are “real people who are deeply committed to each other. Yet they are foreclosed from making that commitment simply because of who they are,” she told reporters last week.

Arguments made by Bonauto, other lawyers for same-sex couples and more than six-dozen supporting briefs have strong echoes of the 1967 Loving v. Virginia case, in which the Supreme Court struck down state bans on interracial marriage. In that case, the justices were unanimous that those bans violated the constitutional rights of interracial couples.

No one expects unanimity this time. The justices have allowed orders in favor of same-sex couples to take effect even as the issue has made its way through the federal court system, but that was action through inaction.

Only 11 states have granted marriage rights to same-sex couples through the ballot or the legislature. Court rulings are responsible for all the others.

A decision is expected in late June.

Santa Claus won’t be coming to Macy’s this year