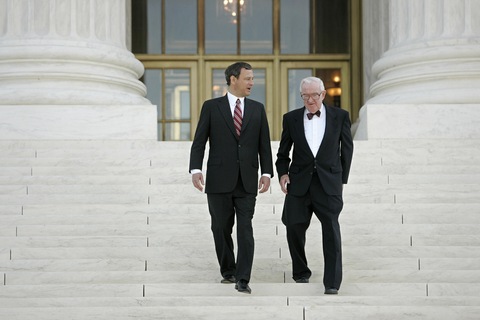 Justice John Paul Stevens, a mainstay of the Supreme Court’s liberal wing, announced Friday he will retire, ending a 34-year tenure on the High Court and setting the stage for what is likely to be a contentious nomination battle for his successor in the U.S. Senate.

Stevens said he will step down when the High Court concludes its current term this summer. The announcement, which comes 11 days before Stevens’ 90th birthday, hands President Barack Obama his second Supreme Court opening to fill.

Speculation had been mounting in recent months that Stevens was considering an exit, the first signal emerging when he hired just one of his usual contingent of four law clerks for the next term.

In a letter to President Obama, Stevens wrote:

Having concluded that it would be in the best interests of the Court to have my successor appointed and confirmed well in advance of the commencement of the Court’s next term, I shall retire from regular active service as an Associate Justice, under the provisions of 28 U.S.C. 371 (b), effective the next day after the Court rises for the summer recess this year.

Most respectfully yours,
John Paul Stevens

Justice Stevens has “worn the judicial robe with honor and humility,” President Obama said from the Rose Gardern. “He turns 90 later this month but he leaves his position at the top of his game.”

The president said he will move swiftly to have a replacement seated in time for the court’s fall term.

“While we cannot replace Justice Stevens’s experience or wisdom,” President Obama said, “I will seek someone in the coming weeks with similar qualities: an independent mind and record of excellence and integrity and fierce dedication to the rule of law and a keen understanding of how the law affects the daily lives of the American people.”

Justice Stevens, the longest-serving justice on the court, was appointed by President Gerald Ford in 1975 to succeed Justice William O. Douglas. Seeking a moderate for the court in the wake of the Watergate scandal, President Ford chose Stevens, then a federal appellate judge and registered Republican who had never been involved in politics.

Born in Chicago in 1920, Stevens majored in English at the University of Chicago. After graduation, he served with the Navy during World War II, earning a Bronze Star before returning to the Chicago area to study law at Northwestern University.

Despite his nomination by a Republican president, Stevens emerged as the leading liberal voice and a prolific author on a court that has tilted further to the right in recent years. He became a consensus builder, often drawing the support of the court’s swing votes to garner a majority on decisions in favor of abortion rights, gay rights, restrictions on the death penalty and the preservation of civil liberties in the fight against terrorism.

Stevens wrote the dissent in the Bush v. Gore case, and during the Bush administration often led the charge against several controversial terror-fighting initiatives. In the landmark 2006 case, Hamdan v. Rumseld, for example, Stevens rejected the Bush administration’s plan to try terrorism suspects by military tribunal at Guantanamo Bay. In a blunt majority opinion, Stevens concluded, “the Executive is bound to comply with the Rule of Law that prevails in this jurisdiction.”

After Chief Justice John Roberts and Associate Justice Samuel Alito joined the court, solidifying its conservative bent, Stevens was more often in the dissent. In January, he wrote the lengthiest opinion of his judicial career, hammering the majority’s position in Citizens United v. Federal Election Commission lifting the ban on corporate campaign contributions. In his 90-page dissent, Stevens mocked the majority’s opinion, writing, “Under the majority’s view, I suppose it may be a First Amendment problem that corporations are not permitted to vote, given that voting is, among other things, a form of speech.”

In a recent – and rare — interview with the New York Times, Stevens said he was contemplating his future on the court and the legal career he loves.

“I do have to fish or cut bait, just for my own personal peace of mind and also in fairness to the process,” Stevens said. “The president and the Senate need plenty of time to fill a vacancy.”

Stevens also rejected the label of “liberal” which is commonly associated with him:

“What really for me marks a conservative judge is one who doesn’t decide more than he has to in order to do his own job,” he told the Times. “Our job is to decide cases and resolve controversies. It’s not to write broad rules that may answer society’s questions at large.”

In a statement, Chief Justice John Roberts praised Stevens for his dedicated service to the court, saying, “He has enriched the lives of everyone at the Court through his intellect, independence, and warm grace.”

“Justice Stevens’ unique and enduring perspective is irreplaceable; his stalwart adherence to the rule of law is unparalleled. The federal judiciary, and indeed the entire nation, will miss his principled jurisprudence,” Leahy said.

Senate Republican Leader Mitch McConnell of Kentucky said of the court opening: “As we await the president’s nominee to replace Justice Stevens … Americans can expect Senate Republicans to make a sustained and vigorous case for judicial restraint and the fundamental importance of an even-handed reading of the law.”

“The court is losing a great and independent thinker,” said Deborah Pearlstein, a former Stevens clerk and associate scholar at Princeton University. “He hasn’t hesitated to be the lone dissenter in a case or to cross boundaries when it was consistent with his beliefs,” she said.