Watch PBS NewsHour’s coverage of the 2016 State of the Union address in the live stream player above beginning at 9 p.m. EST, Tuesday, Jan. 12.

WASHINGTON — A Syrian scientist stricken with cancer and seeking a new start for his family in Michigan will represent Syrian refugees as a guest of first lady Michelle Obama for the president’s final State of the Union address.

President Barack Obama has committed to accepting an additional 10,000 Syrian refugees, but some Republican lawmakers and presidential candidates are critical of the expansion. Republican presidential candidate Ted Cruz, for example, noted the recent arrest of two Iraqi refugees. During an interview with CNN that aired Sunday, Cruz emphasized that they came to the United States “using the same vetting that President Obama wants us to trust with Syrian refugees.”

Refaai Hamo, his son and three daughters landed at Detroit Metropolitan Airport in December, anxious to rebuild their lives. Hamo fled to Turkey from Syria after a missile attack killed his wife and one other daughter. He was profiled on the popular photo blog Humans of New York as “The Scientist.” 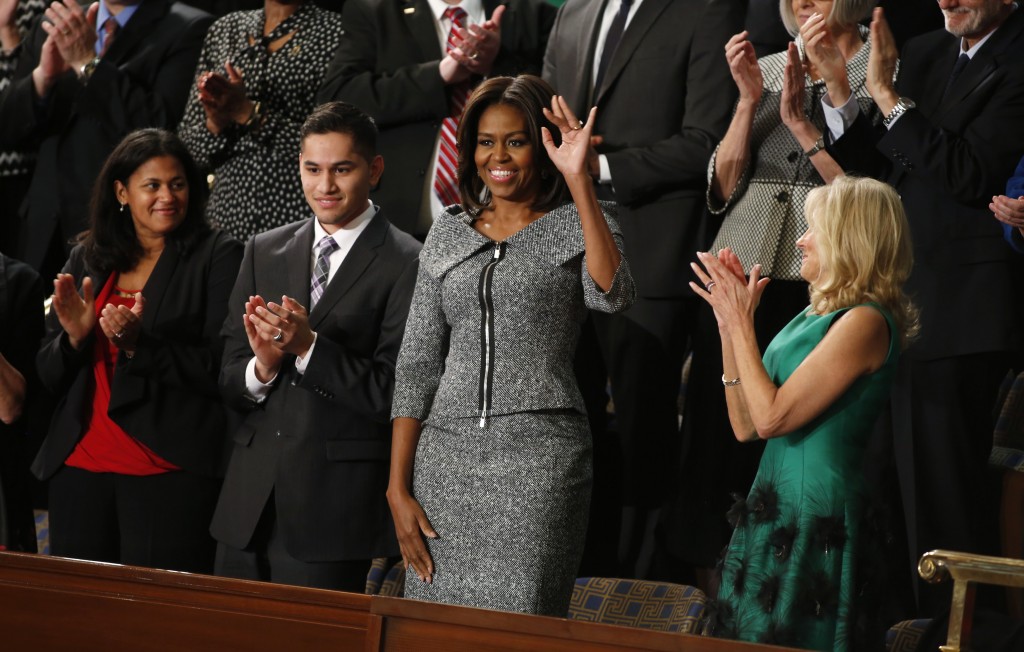 First lady Michelle Obama, seen at last year’s State of the Union, will host a recent Syrian refugee, a family member of a shooting victim and the first female Army Reserve officer to graduate from the Army’s Ranger School at this year’s address. Photo by Larry Downing/Reuters

The White House said Sunday that Hamo will be among about two dozen guests invited to sit near the first lady on Tuesday. The guests include several veterans and service members, including one of the three Americans who thwarted an attack aboard a Paris-bound train.

Those on the guest list will highlight issues that Obama has attempted to prioritize during his tenure, such as expanded health insurance coverage, and issues that he hopes to work on during his final year, such as criminal justice. The guest list includes a California man whose partner was killed in the San Bernardino attack, the first female Army Reserve officer to graduate from the Army’s elite Ranger School and a plaintiff in the landmark Supreme Court case that found same-sex couples have a constitutional right to marry. One seat will be empty, to represent the victims of gun violence.

Obama read about Hamo’s story last month. His cancer had gone untreated because he lacked health insurance. More than $450,000 for the family was raised through an online fundraising campaign actor Ed Norton had set up for them. The White House described Hamo as living the kind of life in Syria that is associated with the American dream. He married his college sweetheart, and they built a life together before a missile tore through the complex he helped design and where his family lived.

Obama told Hamo through a Facebook posting that, “Yes, you can still make a difference in the world, and we’re proud that you’ll pursue your dreams here. Welcome to your new home. You’re part of what makes America great.”

— Gloria Balenski of Schaumburg, Illinois, a woman who lost her job during the recession and whose husband was in danger of losing his job at an auto manufacturer. The couple wrote a letter to the president thanking him for economic priorities he pursued during the recession.

— Jennifer Bragdon of Austin, Texas, a woman attending junior college in hopes of becoming a teacher.

— Edith Childs of Greenwood, South Carolina, a local councilwoman who during a 2007 campaign stop, led the chant “Fired Up.” The crowd replied “Ready to go.” The call and response became an unofficial slogan for Obama’s two presidential campaigns.

— Mark Davis of Washington, District of Columbia, who started a small business that trains low-income people to install solar panels.

— Cary Dixon of Huntington, West Virginia, a mom who has called on family members to speak up about drug abuse as a sickness, which reinforces Obama’s call to direct more resources into drug prevention programs.

— Lisa Jaster of Houston, a major who became the first female Army Reserve officer to graduate from the Army’s elite Ranger School.

— Mark Luttrell, the Republican mayor of Shelby County, Tennessee, who has helped create specialty courts for veterans and those with mental health or drug problems as part of an effort to promote effective rehabilitation.

— Dannel P. Malloy of Hartford, Connecticut, a Democratic governor who has led efforts to increase the minimum wage and tighten gun laws following the massacre of 20 elementary school students in Newtown.

— Braeden Mannering of Bear, Delaware, a 12-year-old who started his own nonprofit that provides healthy food to the homeless and poor.

— Satya Nadella of Bellevue, Washington, the CEO of Microsoft. Under his leadership, the company increased its paid leave benefits to 20 weeks for new mothers and 12 weeks for adoptive parents.

— Jim Obergefell of Cincinnati, Ohio, the plaintiff in the landmark case establishing that same-sex couples have the constitutional right to marry.

— Kathleen O’Toole of Seattle, the chief of the Seattle Police Department, who has focused on community policing and undertook a pilot program in which officers wear body cameras.

— Ryan Reyes of San Bernardino, California, an activist whose partner was among the 14 killed Dec. 2 in the attack by a radicalized couple. He wrote in defense of the Muslim community saying the twisted actions of a few should not be used to view the majority.

— Ronna Rice of Greeley, Colorado, a small-business owner whose company has benefited from trade in Asia.

— Naveed Shah of Springfield, Virginia, a veteran originally from Saudi Arabia who fought in Iraq.

— Earl Smith of Austin, Texas, a veteran who gave Obama a military patch he had worn while serving in Vietnam. Smith kept the patch for 40 years, from Vietnam to his pardon after serving three years in prison for a wrongful conviction. Smith gave Obama the patch when he met the then-senator during the 2008 presidential campaign. Obama carried it with him the rest of the campaign.

— Staff Sgt. Spencer Stone of Sacramento, California, who, along with Anthony Sadler and U.S. Army Specialist Alex Skarlatos, stopped a man from opening fire on passengers aboard a crowded Paris-bound train.

— Oscar Vazquez of Fort Worth, Texas, a veteran who came to the U.S. from Mexico as a child and now works as a business analyst and advocate for Latino students.