The art of the evidence-free claim. How Trump gets by without sourcing what he says

In a recent early-morning tweetstorm, President Donald Trump called on China to tighten security along its border with North Korea. “The word is that recently the Border has become much more porous,” Trump wrote.

The president did not explain in the May 21 tweet where that “word” came from. Nor did he attribute other information he put out on Twitter the day before, when he claimed that Hillary Clinton received $145 million during her time as secretary of state, and that the cost of special counsel Robert Mueller’s year-long Russia investigation was approaching $20 million.

The comments highlighted the president’s tendency to present his remarks as facts without offering a source to back them up, whether on Twitter or in more formal statements and speeches. Trump’s unprecedented communication style has sparked countless fact-checks since he took office, many showing that he says things that are partially or entirely untrue.

But now the habit is attracting fresh scrutiny after a series of unverified claims by Trump helped fuel the ongoing debate over the FBI’s use of an informant in its investigation of his campaign’s possible ties to Russia during the 2016 presidential election.

Trump referred to the controversy, which he has labeled “Spygate,” in several tweets on Monday and over the weekend. Trump has repeatedly called the FBI informant — the retired Cambridge professor Stefan Halper — a “spy” without citing any evidence, drawing rebukes from Democrats and some Republicans.

Trump’s supporters argued that criticism of his “Spygate” claims was an example of the media’s quest to find factual inaccuracies in his statements.

Anthony Scaramucci, who served briefly last year as the White House communications director, said in an interview that the focus on Trump’s propensity to make claims based on vaguely-sourced information ignores his skills as a communicator.

‘He can say things that are false if they represent views that his base wants to see espoused. It’s a totally different game.’

“A big element of his communication style is storytelling. Americans that listen to the president aren’t looking for precision on the facts. They’re looking for the macro wave of the story,” said Scaramucci, who has kept in touch with Trump since being fired from his White House job last July.

“He’s going to get some things wrong about the facts of the situation, but his gut instinct is right. That’s why he speaks in those broad overtones,” Scaramucci said.

Historians and veterans of past administrations acknowledged the strategy is effective, even as they lamented how it was reshaping the presidency.

In the past, “being caught in a lie, or caught in a serious misstatement that was not checked in any way, was very, very politically dangerous for a president,” said Philip Heymann, a former senior official in the Justice Department under Presidents Jimmy Carter and Bill Clinton.

“Trump has a base that isn’t much affected by whether he lies,” said Heymann, who served on the Watergate prosecution team. “He can say things that are false if they represent views that his base wants to see espoused. It’s a totally different game.”

Trump’s habit of making unsubstantiated claims has no precedence in modern U.S. history, said Barbara Perry, the director of Presidential Studies at the University of Virginia.

Before Trump, “Richard Nixon was the closest thing we had to a prevaricating president,” Perry said. “Nixon had always been viewed as a shady character. His nickname was Tricky Dick. But Nixon didn’t typically go out to the American people and tell a big lie every day.”

Others said Trump also stands out when compared to more recent presidents like George W. Bush, who faced questions about his administration’s handling of intelligence information in the run-up to the Iraq War.

“The White House around Bush had its own set of issues,” said Peter Zeidenberg, a former federal prosecutor who served on the special counsel team that investigated the leak of CIA officer Valerie Plame’s identity in 2003. “But I still don’t think you can compare what they were doing to what Trump is doing on a daily basis.” 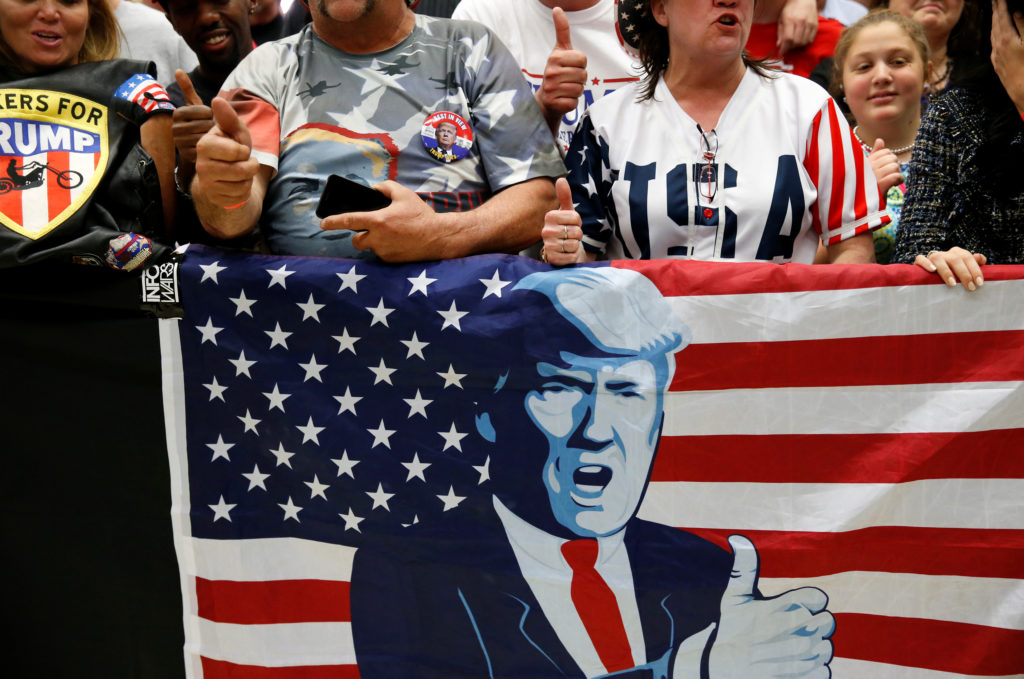 Supporters of President Donald Trump cheer as they wait for him to appear at a rally in Elkhart, Indiana, on May 10, 2018. Polls show a growing number of Republicans do not want Trump to cooperate with Special Counsel Robert Mueller’s investigation. File photo by REUTERS/Leah Millis

The political fight over the FBI’s Trump campaign informant, which took off after Trump raised the issue in several tweets earlier this month, is a good case in point.

Trump tweeted on May 17 that “word seems to be coming out” about the FBI spying on his campaign. The tweet quoted Andrew McCarthy, who made the spying claim in an article he wrote the previous week for the conservative publication National Review. The next day, after McCarthy repeated the claim in an interview on Fox & Friends, Trump tweeted about it again, though this time he didn’t cite where he was getting the information.

“Reports are there was indeed at least one FBI representative implanted, for political purposes, into my campaign for president,” he wrote, adding: “If true – all time biggest political scandal!”

Since then, news stories published by the New York Times, Washington Post and other media organizations have shown the claims to be false. Republican lawmakers also debunked Trump’s claims in television interviews.

Sen. Marco Rubio, R-Fla., told ABC’s “This Week” on Sunday that the FBI asked Halpar to meet with Trump campaign officials as part of the agency’s counterintelligence investigation into Russian election meddling. There was “no evidence” of FBI spying on Trump’s campaign, Rubio said.

‘Once an idea is implanted in the public’s head it’s almost impossible to overturn it.’

The developments come at a time when the public’s support for the special counsel probe is declining, especially among Republican voters. A CBS poll released earlier this month found that 53 percent of Republicans believe Trump should cooperate with the investigation, down from 73 percent in January. Fifty-three percent of respondents said the probe was politically motivated, up from 48 percent in a CBS poll last December.

“The president’s sustained messaging regarding the need to kind of wrap up [the special counsel investigation] is resonating, certainly with his base and probably a little further,” said Neil Newhouse, the co-founder of Public Opinion Strategies, a leading Republican polling firm.

The “spygate” episode is a reminder that “once an idea is implanted in the public’s head it’s almost impossible to overturn it,” Perry said.

Trump’s Twitter references to anonymous reports predate his presidency. On Election Day in 2012, Trump warned of “more reports of voting machines switching Romney votes to Obama.” That same year, Trump famously tweeted that an “extremely credible source” had told him Barack Obama’s birth certificate was fake. Trump did not offer other evidence to support the claim, which was not true and has been debunked numerous times over the years.

When he was running for president four years later, Trump wrote, without evidence, about “reports from many voters” of wrongdoing by Sen. Ted Cruz’s presidential campaign, and of long lines to get into his own campaign rallies.

The trend has continued since Trump took office, making it hard for the public to know if the president is citing a credible piece of information given to him by government officials, or an unsubstantiated rumor that he may have heard on a conservative talk show.

Further complicating the issue, presidents are also not required to explain where their knowledge comes from, and they receive classified information on a daily basis that can’t be fully shared with the public. So there have been times when Trump tweeted out information without providing any evidence or context that later turned out to be true.

On the morning of May 10, for example, Trump tweeted: “Five Most Wanted leaders of ISIS just captured!” By the end of the day, news organizations had confirmed the details of the operation, including the names of the captured commanders

Even then, however, some pointed out those leaders were “key” and not “most wanted,” a sign that Trump’s tweeting remains as divisive as ever.

Yet Scaramucci, the former White House adviser, said there was a reason why Trump didn’t change his approach after becoming president, he said.

“When he was coming into the presidency there was a two or three-week period of time when he was hoping to be presidential on Twitter,” Scaramucci said. “But then he realized that he was going into an even bigger knife fight in Washington than the knife fight on the campaign.”

“For the president,” he added, “Twitter is his gun at a knife fight.”

Left: President Donald Trump speaks to members of the media in May before departing for New York on the South Lawn of the White House in Washington, D.C. Photo by Eric Thayer/Bloomberg via Getty Images