The bipartisan movement to bring back earmarks in Congress

As Congress gears up for its third spending battle in as many months, a growing number of lawmakers from both parties are calling for a repeal of the earmark ban, arguing that an updated version of the old-school spending system could foster bipartisanship in budget debates and help avert future government shutdowns.

Support for bringing back so-called earmarks — line-item appropriations for specific projects, typically requested by lawmakers for their home state — is at its highest since the earmark ban was enacted in 2011 after Republicans took control of the House, according to the budget watchdog groups Taxpayers for Common Sense and Citizens Against Government Waste.

Earlier this year, the House Rules Committee held a series of hearings about reinstating the system, which critics often refer to as pork-barrel spending. President Donald Trump offered praise for the old earmark system at a televised White House meeting earlier this year.

And in interviews, lawmakers from both sides of the aisle said they supported the change, saying it would make it easier to reach bipartisan deals in Congress. By including funding for members’ own pet projects, previous congressional leaders were able to twist arms and secure votes for otherwise unpopular legislation.

“I’ve always been supportive of making sure members of Congress have an opportunity to put funding into appropriations bills that work for their state,” said Sen. Patty Murray, D-Wash. “That’s part of our job — to fight for our state.”

Sen. Susan Collins, R-Maine, said the restoration of earmarks would “help rectify what has been an enormous shift in power from Congress to the executive branch over the past 10 years.”

Others pointed to Congress’ long history of using earmarks to help pass spending bills and fastrack individual projects. At the House Rules Committee hearing in January, Sen. Dick Durbin, D-Ill., noted that “the first earmark was in the first Congress of the United States.”

By including funding for members’ own pet projects, previous congressional leaders were able to twist arms and secure votes for otherwise unpopular legislation.

Indeed, the Senate Historical Office counted the Lighthouse Act of 1789, the ninth bill ever passed by Congress, as the first earmark legislation, according to a Politifact report. The bill used federal money to build lighthouses, but also included funding for a pier in Philadelphia that was backed by congressional members from Pennsylvania.

For the next 200 years, earmarks were included in spending bills only sparingly, including in an 1817 public works earmark, later vetoed by President James Madison, that was described in a Senate debate as “magnificent schemes” and money spent on “objects worse than useless.” Earmark usage ballooned in the late 1990s and early 2000s, peaking at nearly 14,000 items in 2005 and reaching a record $29 billion in 2006, according to the budget watchdog group Citizens Against Government Waste. 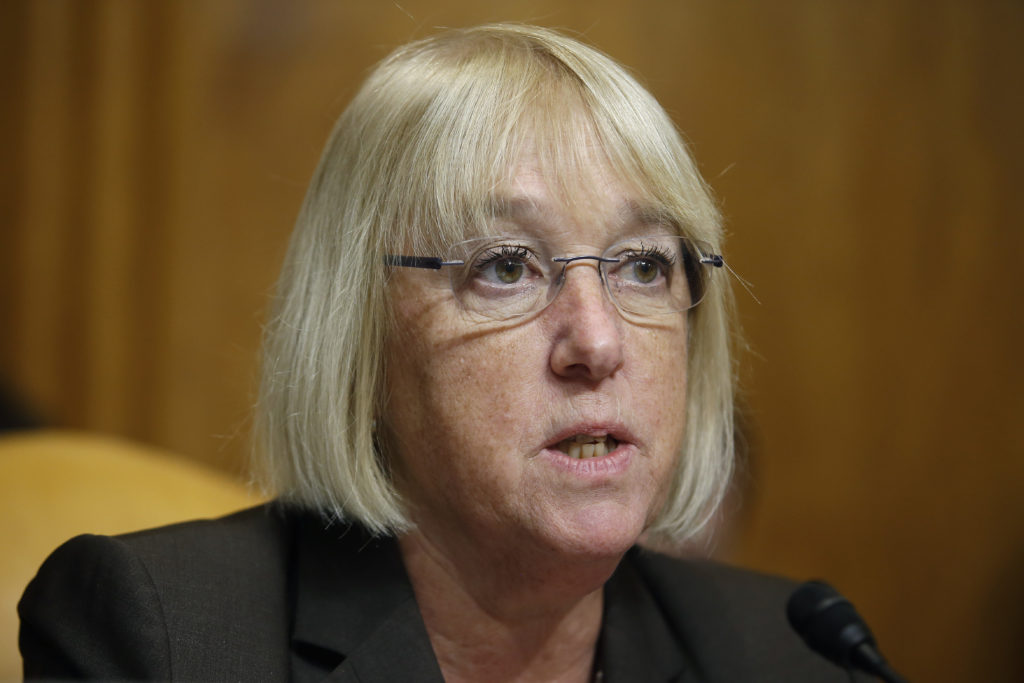 Sen. Patty Murray, D-Wash. In a brief interview Murray said she supports restoring the earmarks system, but “it has to be done in the right way.” Photo by REUTERS/Joshua Roberts

But ahead of the 2010 midterm elections, House Democrats led by then-Speaker Nancy Pelosi announced an effort to overhaul the system. The House Appropriations Committee banned earmarks directed to for-profit organizations, eliminating about 10 percent of earmarks.

House Republicans led by then-Minority Leader John Boehner responded by saying that they wouldn’t request any earmarks at all, and when Boehner took over as speaker in January of 2011, earmarks were effectively dead. (In his State of the Union speech that year, President Barack Obama said he would veto any bill that included earmarks because “the American people deserve to know that special interests aren’t larding up legislation with pet projects.”)

Since then, House Republicans have renewed the moratorium on earmarks in each legislative session. House Speaker Paul Ryan dismissed an effort by some Republicans to modify the ban after the 2016 election.

But this year could be different. Congressional leaders haven’t taken formal steps yet to overturn the ban. But unlike many recent battles in Congress, the issue doesn’t fall along the usual partisan lines. Republicans and Democrats on both sides of the Capitol are backing the earmark comeback, which could put more pressure on Ryan and Senate Majority Leader Mitch McConnell to act.

Sen. Patrick Leahy, D-Vt., the vice chair of the Senate Appropriations Committee, said specific funding allocations made by Congress are a critical part of maintaining the balance of power between Capitol Hill and the White House.

“We’re the ones that have to raise the money under the Constitution,” Leahy said in a brief interview. “We ought to be able to have some say in how it’s spent.”

Trump appeared to give earmarks supporters a boost when he waded into the debate during a bipartisan meeting with members of Congress at the White House in January. Trump told the group they should consider “going back to a form of earmarks.”

“Our system lends itself to not getting things done, and I hear so much about earmarks — the old earmark system — how there was a great friendliness when you had earmarks,” Trump said at the meeting.

The newfound momentum has raised alarm among some government watchdogs groups who have long argued that earmarks are not needed to make government function effectively. Earmarks are “corrupt, inequitable and wasteful,” said Thomas Schatz, the president of Citizens Against Government Waste. He added that trading votes for personal spending priorities is “legalized bribery.”

“The exchange of a few million dollars in earmarks to vote for a bloated spending bill is simply not acceptable to taxpayers,” Schatz said. “It’s just not the way things should work.”

Schatz’s group has published an annual report, called the Pig Book, since 1992 that highlights wasteful earmark spending. Examples include $50 million for an indoor rainforest in Iowa, $500,000 for a teapot museum in North Carolina and $223 million for the now infamous “bridge to nowhere” in Alaska. 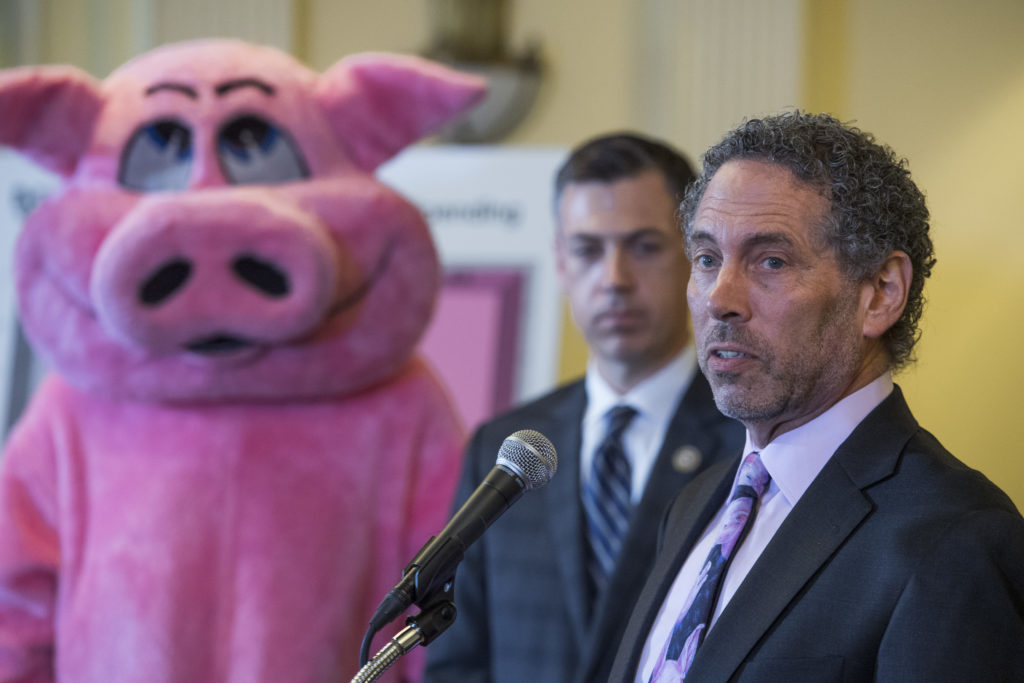 Thomas Schatz, the president of Citizens Against Government Waste, pictured at a news conference last year where his group released its 2017 Congressional Pig Book of pork-barrel spending. (Photo By Tom Williams/CQ Roll Call)

The push also faces opposition from some conservative Republicans in the House and Senate.

“I don’t know that bringing back earmarks is something that most conservatives would support,” said Rep. Mark Meadows, R-N.C., the chairman of the House Freedom Caucus. “It would be a tough sell, even though I think there is a great frustration over a lack of the power of the purse.”

A bipartisan group of senators led by Sen. Jeff Flake, R-Ariz., recently introduced a bill to make the ban on earmarks permanent. “It’s time to stick a fork in congressional pork with a permanent ban on earmarking,” Flake said in a statement introducing the bill last month.

Other critics said Trump’s tacit support for the system runs counter to the “drain the swamp” message that helped fuel his 2016 campaign.

The lawmakers who benefited the most from earmark spending in the past typically served on the House and Senate appropriations committees.

Many long-serving lawmakers said deal-making was the very thing missing in Congress in an era of intense partisan gridlock. They also argued that earmarks are effective because lawmakers know their individual districts’ needs best.

But Schatz, of Citizens Against Government Waste, said the old system didn’t allocate funds evenly. The lawmakers who benefited the most from earmark spending in the past typically served on the House and Senate appropriations committees. In the last legislative session before the 2011 ban was enacted, the group found that the members of the House and Senate appropriations committees made up about 15 percent of all members of Congress, but received 51 percent of the earmarks and 61 percent of all earmarked money.

That’s one reason even earmark supporters say there need to be reforms to the process before any money is allocated.

“It has to be done in the right way,” Murray said. Congress would need to “make sure we don’t have any problems with it as there has been in the past.”

“I wouldn’t want to go back to earmarks that no one would claim [credit for], that benefited special interests,” Collins said. Collins called for a system where earmarks are “not secret. They’re posted on the internet. The sponsor is made clear. They are for a public purpose. They go to a public entity.” She added: “There’s nothing wrong with that.”