The chess match for control of state legislatures

Democrats closed out 2017 with high-profile electoral wins from Virginia to Alabama, energizing grassroots activists focused on the goal of winning back Congress next year.

But the victories belie a serious problem for the party at the state level. Despite making gains in some state legislatures this year, the Democratic Party is at a historic disadvantage heading into the midterm elections — the first election cycle that will help shape the all-important redistricting process after the 2020 census.

The math suggests a near-impossible challenge, especially given the historical track record of the minority party’s success in off-year elections.

The math suggests a near-impossible challenge, especially given the historical track record of the minority party’s success in off-year elections.

The party that doesn’t control the White House has won an average of 300 to 400 state seats in midterms over the past century, according to Tim Storey, an analyst at the National Conference of State Legislatures.

“Even if Democrats do that in 2018, they’ll still be in such a deep hole that they won’t swing a lot of state legislatures into their column, which is what matters,” Story said.

That doesn’t mean Democrats can’t pull off what would be an unprecedented comeback at the state level.

Democrats made huge gains in the Virginia House of Delegates in November, and flipped red seats in other states like Oklahoma. The victories, fueled by grassroots enthusiasm and funding from wealthy liberal donors, amounted to a powerful rejection of President Donald Trump.

Opposition to Trump and his policies, from taxes to immigration, will no doubt drive Democratic voters to the polls again in 2018.

Still, Democrats acknowledged the obstacles they face in rebuilding the party at the state level after years of focusing on the White House and Congress.

In the Obama years, “there was this philosophy inside the Democratic Party [that] if we invest in the presidency, that investment, that rising tide at the presidential level would lift all ships,” said Jessica Post, the executive director of the Democratic Legislative Campaign Committee. When it didn’t, Post said, the party “suffered some major losses at the state legislative level.”

Things will be different in 2018, said Post, whose group is the leading Democratic organization focused solely on state races. “We’re being really ambitious and driving really hard.”

The stakes will be greater than they were in the past few election cycles, when state legislative elections set the course for local policy but had little impact on shaping Congress.

Next year’s midterm elections will be the opening round in the decennial fight over redistricting, the complex process used to redraw congressional seats to reflect population changes in the U.S. Census.

Redistricting is handled directly by the state legislature in 37 states, according to Ballotpedia, a website that tracks U.S. elections. Of the other 13 states, six assign the map-drawing process to a commission, which can sometimes include state lawmakers; and seven do not need to go through redistrictisting because they only have seat in Congress.

In states where lawmakers draw the congressional maps, the process is controlled by the party in charge of the state legislature. In the past, that’s often led to charges of “gerrymandering,” or drawing partisan districts that favor one party over the other.

The last redistricting process began in 2011, one year after Republicans made huge gains at the state level in the 2010 midterm elections. 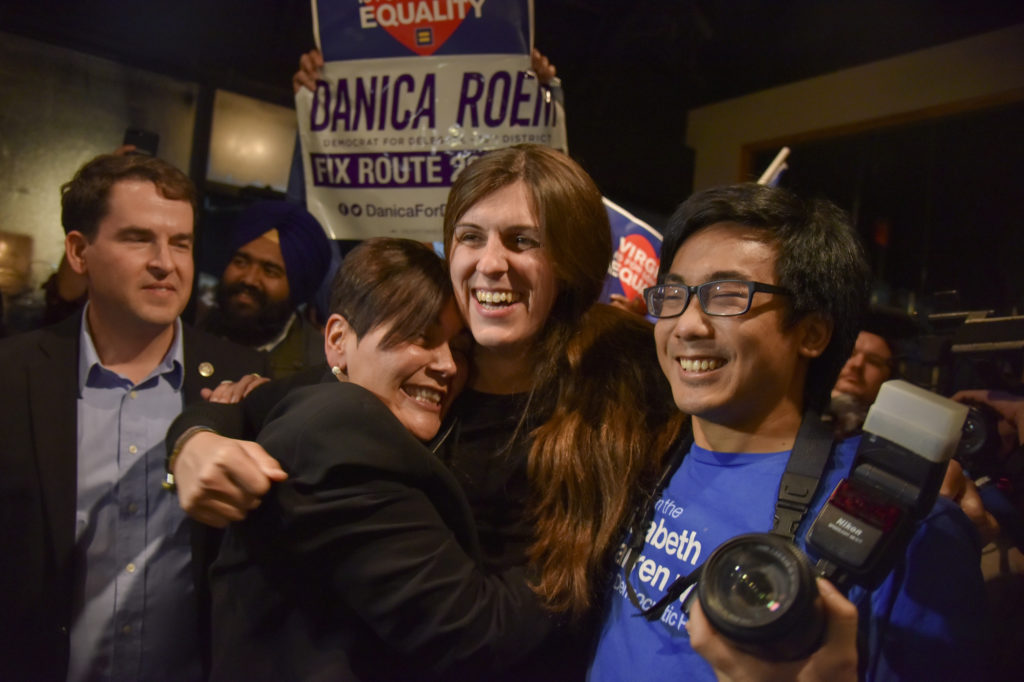 MANASSAS, VA – NOVEMBER 7:
Democrat Danica Roem, who was elected to the Virginia House of Delegates in November, prepares to give her victory speech. Photo by Jahi Chikwendiu/The Washington Post via Getty Images

Republicans used their advantage to redraw congressional districts in key states like Michigan and Pennsylvania. The new congressional maps helped the GOP to retain control of the House in 2012 — despite losing the overall House vote that year by 1.1 million votes — and hold onto the chamber through the rest of Obama’s tenure in office.

That same process will play out all over again starting in 2018.

Next year, 866 lawmakers in states that control redistricting are up for reelection and would be in office when redistricting starts in 2021, according to Storey. That’s only 12 percent of the state legislators who will decide the new congressional maps; the rest will be determined by elections in 2019 and 2020. But as Storey put it, the upcoming midterms will still be “the first redistricting election of the 2020 cycle.”

Who has the advantage in the money race?

The chess match for control of state legislatures — and with it the power to help shape Congress for the next decade — is already underway, even though the national political debate remains focused on Trump and the GOP’s ability to hold onto Congress in the short-term.

Both sides have been fundraising to stockpile enough resources to compete in state races next year. But the question of who has the advantage in the money race depends on who you ask.

“The resistance is active, volunteers are flooding into Democratic campaign offices, and you have to be ready to accept their help.”

The Democratic Legislative Campaign Committee is on pace to raise $11 million in 2017, nearly equaling the group’s $12 million haul during last year’s presidential election, according to Post, the group’s leader. Post said the group hopes to raise a total of $30 million for the 2018 cycle.

Donations are up from grassroots activists as well as national donors who see a need to pump money into state elections, Post said.

The DLCC dipped into its warchest this year, targeting specific state races and testing campaign strategies ahead of the 2018 midterms.

The group invested in elections in states like Iowa and Florida, where it spent $450,000 to help Democrat Annette Taddeo win a Miami-area state senate seat previously held by a Republican. It also spent money on longer-term projects, like helping Minnesota’s state Democratic Party build out its digital fundraising program.

In some cases, the funding was used to help state campaigns that weren’t prepared to handle the influx of first-time Democratic volunteers looking for ways to engage in politics in the era of Trump.

The group sent one of its field directors to Delaware, for example, where Democrat Stephanie Hansen’s successful campaign for a state senate seat earlier this year attracted more than 1,000 volunteers over the course of the race, according to Post.

“The resistance is active, volunteers are flooding into Democratic campaign offices, and you have to be ready to accept their help,” Post said. “You need to make sure there’s enough water and granola bars for people to go out and door knock.”

The Democrats’ stepped-up efforts at the state level haven’t gone unnoticed by the GOP.

“They have gotten better. They have refocused on the state level and building the farm team,” Matt Walter, president of the Republican State Leadership Committee and Post’s counterpart in GOP politics, said in an interview.

Walter pointed to Forward Majority, a new liberal super PAC focused on erasing the Democrats’ deficit in state legislatures. When the group — which is led by former Obama campaign officials and other Democratic strategists — launched in September, it announced a goal of raising $100 million over the next four years.

Obama has also made redistricting reform a political priority since leaving office, throwing his support behind the National Democratic Redistricting Committee. The organization, which is chaired by close Obama ally and former Attorney General Eric Holder, is focused on winning state races while changing the redistricting process to make it less partisan.

“The biggest challenge for us is going to be matching the dollars of former President Obama and Tom Steyer and some of the other big progressive spenders,” Walter said. He added, “the extreme progressive certainly have their budgets lined up.”

But so do Republicans. Walter said the Republican State Leadership Committee budget for 2018 was $42 million, significantly more than the $30 million Post said her group hopes to raise by next November. The organization’s efforts will also be bolstered by other conservative groups eager to protect the GOP’s gains at the state level.

Republicans in recent cycles have also taken steps to recruit more diverse candidates for state offices, something the party has struggled to do at the national level.

Since 2012, nearly 400 women and 100 minority Republican candidates have won state offices, Walter said. Just this month, Dean Tran, a Republican candidate who was born in Vietnam, won a race for a state senate seat in Massachusetts that had been held by a Democrat.

The race was an example of a Republican winning “a Democratic seat in the bluest of states,” Walter said. It also proved that Democrats’ claims of a wave election might be premature, he added.

“It’s hard to wrap your head around the sense that there’s an excitable wave out there when you’re losing seats in Massachusetts,” Walter said.

Massachusetts won’t be in play in 2018; Tran’s win notwithstanding, Democrats have enormous majorities in the state House and Senate.

But several states have legislative chambers that could switch control next year, making them potential hotspots in the looming midterm battle.

Republicans hold a one-seat advantage in the Colorado and Maine state senates, where both chambers have 18 Republicans and 17 Democrats, respectively. Maine’s 151-seat state House, where Democrats have a slim, five-seat majority, could also be up for grabs.

Both parties are also eyeing Connecticut’s 36-seat state senate, which is deadlocked at 18-18 apiece. Virginia’s House of Delegates could also become tied, pending the results of a recount.

Democrats are also within striking distance of taking control of the state senate in Iowa, Arizona and Minnesota. Post said her group will be focused on those and other states as it tries to chisel away at Republican-led state legislatures next year.

Democrats are also within striking distance of taking control of the state senate in Iowa, Arizona and Minnesota.

Whether next year’s midterm turns into a wave election isn’t the right question, said Storey, the elections expert at the National Conference of State Legislatures.

If history is any guide, Democrats are almost guaranteed to make some gains at the state level in the midterms. The party in the White House has suffered a net loss in state legislative seats in 27 of the 29 elections since 1900, according to Storey.

The only exceptions were 1934, when Franklin D. Roosevelt was leading the country out of the Great Depression; and 2002, when George W. Bush remained popular in the aftermath of the 9/11 terrorist attacks.

The real question for Democrats, said Storey, is if the party can create a big enough wave to overcome its historic deficit in state legislatures. Will 2018 be a “traditional surge for Democrats, or a disproportionate wave?” Storey said.

A mere “traditional bounceback” won’t be enough to win back Republican-controlled legislatures in states like Michigan, Wisconsin and Pennsylvania, where the GOP has built up large leads in recent years, Storey said. “The problem for Democrats is that they’re just in such a deep hole right now.”

Left: Earlier this month, Dean Tran, a Republican candidate who was born in Vietnam, won a race for a state senate seat in Massachusetts that had been held by a Democrat. The Massachusetts statehouse courtesy of Wikimedia Commons