Environment vs. Economy in 2012 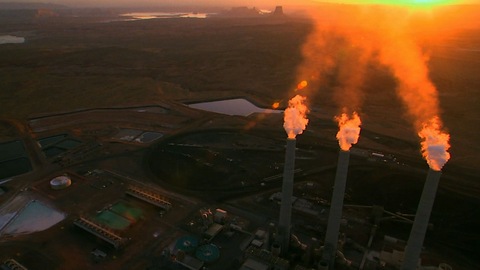 Smokestacks belch out smoke at a factory; file photo

In every election there are a few issues that shape the look and feel of the campaign, and even in the earliest stages of the 2012 race, one issue has emerged: the economy versus the environment. Much of the Republican presidential field has already made a point of talking about the two voter concerns as a choice — the economy and jobs or environmental regulation.

Minnesota Rep. Michele Bachmann calls the Environmental Protection Agency “job killing.” Texas Gov. Rick Perry has called for a moratorium on all federal regulations, especially those from the EPA. Former Massachusetts Gov. Mitt Romney has said he supports some of what the EPA does, but he opposes regulations relating to carbon pollution.

As the economy slumps along, those positions may resonate with voters. After years of down economic news, anything that hits at the economy may be anathema. But the issue is not cut and dried according to an analysis of our 12 Patchwork Nation county types.

County types that vote Republican by large margins seem to be sympathetic to the emerging GOP message on the environment — the Evangelical Epicenters, for instance. But counties that are more split politically and more critical to the winning in November are much more divided on the question and could cause the GOP problems. Granted, some evangelical leaders garnered attention a few years ago for taking up the mantle of environmental causes.

Support In Some Places, Uncertainty Elsewhere

Patchwork Nation received the CCES survey from our partners at American University and analyzed it using our 12 county types. We broke it into three answers: those favoring the environment, those favoring the economy and those saying the two are “about the same.”


It is an understatement to say there is a divide on this question in the United States.

In the socially conservative Evangelical Epicenters, rural agricultural Tractor Country counties and Mormon Outposts, the answers were heavily weighted to “the economy.” In those 824 counties, holding 19 million people, the number of people saying the economy was more important or much more important was double or nearly double those who lean toward the environment.

In the Epicenters, for instance, 47 percent said the economy was more important versus 24 percent who said the environment. These counties are the kinds of places where the GOP candidate message that the economy trumps environmental regulation seems to carry a lot of weight. And they hold the most reliably Republican voters in Patchwork Nation. Sen. John McCain carried each of those three county types by more than 60 percent by 2008.

Some have also been slammed economically. The Epicenters, like Nixa, Mo., have seen high unemployment and the Mormon Outposts have been hammered in the housing crunch. And remember, in Tractor Country “environmental regulations” can have direct impact on a huge part of the local economy and life: agriculture.

But as we have noted in more in-depth reporting, come Election Day, it’s not the solid reliable Democratic or Republican counties that matter as much as it is places like the Monied Burbs, 285 swing-voting counties that hold some 70 million people. And in the Burbs the economy versus environment question is more complicated.

Do people in those places say the economy is more important than the environment? Yes, the recession has taken a toll everywhere. But the numbers are much closer.

Are voters more concerned about the environment, the economy or are their concerns roughly the same?

The proposals from some of the GOP candidates — like Perry’s moratorium and, more seriously, Bachmann’s stated desire to shutter the EPA — are bold but also very conservative and probably not the kinds of plans that resonate with voters who think the environment has to be treated equally with the economy.

It’s tougher to see those ideas selling in the Burbs, where voters not only care more about the environment but where they also have not been hit as hard by the recession. The unemployment rate is lower in the Burbs and the incomes are higher.

All About the Middle

The simple rules of presidential politics are well-known. Candidates run to more extreme positions (to the right or left) during primaries to capture their bases, and then run to the more centrist positions for the general election to capture moderate votes. That may be what’s happening on the economy versus environment issue.

But the environment is a tricky issue to gauge in the 21st Century. It’s not just for “tree huggers” anymore, it strikes at the heart of moderate voters.

Consider the Monied Burbs. They are well-educated and wealthy, but by no means overwhelmingly liberal and many in them consider their concerns about the environment to be pragmatic not a luxury.

There are more Whole Foods Markets in the Burbs than in any other Patchwork Nation county type by far. And, beyond the cache, people in the Burbs plunk down a premium for their hormone-free beef and organic apples because they have concerned about the health of themselves and their families.

As the campaign moves forward two things will determine how the “economy versus environment” issue plays out. First, how dramatic and serious are the proposals the candidates put forward. Is it a major change he or she repeats over and over that could frighten off those moderate voters in the Burbs, or a non-specific applause line uttered once or twice?

And second, just how bad is the economy in 2012? After all, voters’ feelings about the economy compared to the environment are not set in stone. What voters in Patchwork Nation think when unemployment is at 9 percent may be very different than what they think when it is 10 or 11 percent.