The game for 2020 Democrats: wooing millennials

By Election Day 2020, millennials will be a larger share of America’s adult population than Baby Boomers.

Democrats have long cast those born between 1981 and 1996 as the party’s rising voting bloc; they’re the most left-leaning generation in American history. But low turnout among young voters have upended that prediction.

This presidential race could be different, activists say. Young voters are poised to play a larger role than ever in the Democratic primaries, as a diverse field marked by generational divides and differences in style and temperament try to win over the party’s progressive base.

“Young people come from a very different set of experiences and have seen America in a different way than” older voters, said Heather Hargreaves, the executive director of the environmental advocacy group NextGen America. “That drives their thinking about issues in a different way.”

In 2020 it won’t be enough for Democratic candidates to simply talk about issues important to young voters, like climate change, marijuana legalization, or student debt relief, Hargreaves and activists from other left-leaning groups said. Candidates will have to make issues central to their campaign — and also prove they understand how those issues affect young Americans.

It’s too early to say which Democrats will do this well, but generational divides could be a factor in their approach.

Former Vice President Joe Biden, 76, and Vermont Sen. Bernie Sanders, 77, haven’t announced their presidential bids. But they’re seen as likely to run and both men would be the oldest president ever elected. Massachusetts Sen. Elizabeth Warren is 69.

Another 2020 Democratic contender, Hawaii Rep. Tulsi Gabbard, is 37. South Bend Mayor Pete Buttigieg, also 37, said in a phone interview that he believed his perspective as a millennial was needed in the 2020 race, though he played down the generational divides in the Democratic field. 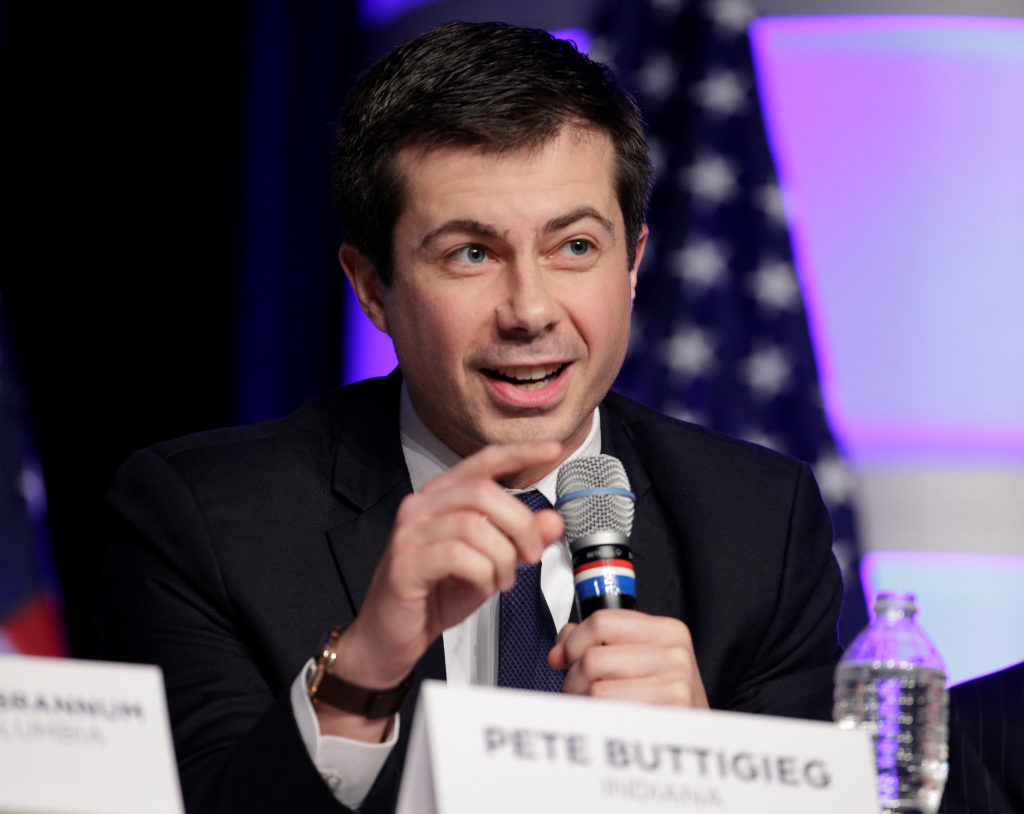 South Bend Mayor Pete Buttigieg, 37, had made appealing to millennials a central part of his 2020 campaign. File Photo by REUTERS/Joshua Roberts

“It doesn’t have to be a conflict of one generation against another,” Buttigieg said in a recent phone interview. “It’s just a realization that this generation — that has a direct personal stake in so many of the decisions that are being made — also has something to offer in helping to make them.”

Buttigieg has made a direct appeal to millennials, including in the video announcing his 2020 campaign, where he highlighted his generation’s economic struggles and military services in the wars in Iraq and Afghanistan.

“Sometimes certain things are a certain way until they’re not,” Buttigieg said. “And I think we have a generation now that is very skeptical of the way things have worked really for our entire lives.”

The bedrock of Buttigieg’s candidacy is “intergenerational justice,” a broad concept he defines as taking long-term challenges as seriously as short-term ones. That means tackling global issues like climate change, but also things like refinancing student debt to make younger Americans more economically stable.

‘We have a generation now that is very skeptical of the way things have worked really for our entire lives.’

Buttigieg isn’t the first younger Democrat to focus on issues that appeal to young voters. Victories by numerous younger candidates in the 2018 midterms proved the millennial generation’s takeover of the Democratic Party is already underway, said Waleed Shahid, the communications director for the progressive group Justice Democrats.

Justice Democrats gained national attention in 2018 for being one of the first groups to support Rep. Alexandria Ocasio-Cortez, D-N.Y., in her successful primary challenge against former Rep. Joe Crowley, a veteran lawmaker who was part of the House Democratic leadership team. The group plans to back more progressive primary challengers next year.

The Democratic Party’s “center of energy is with grassroots movements and the young people [who] are leading them,” Shahid said.

Shahid pointed to the Green New Deal, a set of broad energy and climate goals first proposed by an environmental justice group and then quickly transformed into a bicameral congressional resolution led by Ocasio-Cortez. The plan has been largely dismissed by Republicans and has little chance of passing the GOP-controlled Senate. But the plan’s quick rise proves there’s an appetite for bold ideas, even if they’re not bipartisan. Each of the five Democratic senators running for president endorsed the Green New Deal as a framework.

Karlyn Bowman, a senior fellow at the conservative American Enterprise Institute, said 2020 Democrats’ support of the Green New Deal was a calculated response to younger voters. Younger voters are unlikely to force politicians to fully adopt their policy preferences, but “many will certainly tailor their messages or change the emphasis they give to certain issues,” Bowman said.

Skeptics of the millennial-rise theory note that, historically, young voters turn out in low numbers compared to older voters. In the 2018 midterm election, for example, 31 percent of voters between the ages of 18 and 29 cast a ballot. (In comparison, 49 percent of the overall eligible population voted in 2018.) 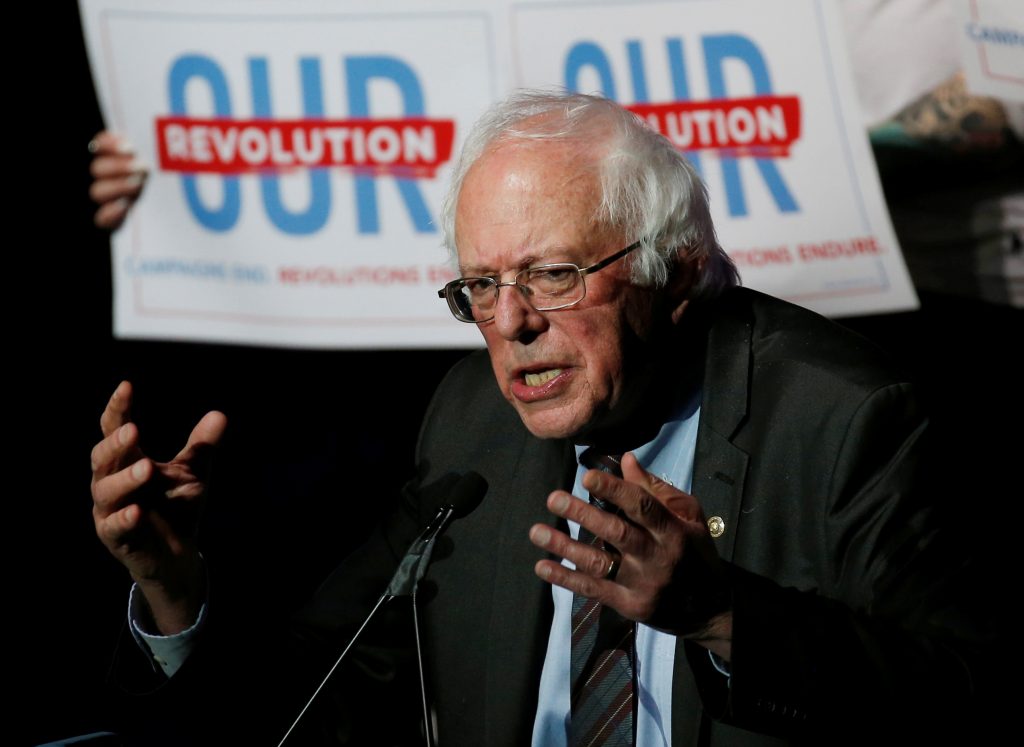 Sen. Bernie Sanders, I-Vt., has not announced that he’s running for president in 2020 yet. If he ran and won the election, he would be the oldest candidate to win the White House. File photo by REUTERS/Mary Schwalm.

But while youth turnout in 2018 was low, it still represented a 10-point jump from the 2014 midterms.

Turnout in recent elections would have been even higher without successful voter suppression efforts aimed at college students and other young voters, said Anisha Singh, the senior organizing director for Generation Progress, the youth engagement arm of the influential left-leaning Center for American Progress.

In recent years, Singh said, Republican-controlled state legislatures have moved to reduce the number of polling places in and around college campuses, a move Democrats have argued was in part to decrease the young, mostly liberal college vote.

But Singh said recent movements — from Standing Rock, Black Lives Matter, March for Our Lives and Occupy Wall Street — showed in part that young Americans have built real political power both inside and outside Washington, Singh said. It’s forcing politicians to invest more in the targeting the millennial vote.

“The reason that elected officials are not and have not historically been [focusing on] young people is because they always just say, ‘Well they don’t turn out as high as they Boomers turn out,’” Singh said. Now, “they’re starting to see that shift and realizing that it is time.”

But Hargreaves, who leads NextGen America, said older politicians need to remember that “young people have a bullshit meter like no one else.” To win millennial voters’ trust on issues, Hargreaves said, candidates have to prove they care and are not simply pandering.

“You could have the best social team and digital team and do effective targeting, but if you don’t have an authentic message that appeals to young people you’re not going to get them to support you,” she said.

Buttigieg, for his part, said authenticity can only take candidates so far in this political environment. For young Americans — he included himself — Buttigieg argued the country they’ve come of age in is drastically different than the one older elected officials know.

“We’ve been at war more years than we have have not, we’ve seen an economy that went through a terrible recession, and then went through two periods of enormous growth that seemed to have left typical Americans no better off,” Buttigieg said. “There’s a readiness to ask more fundamental questions that haven’t been asked in a long time and I think a new generation of leaders is uniquely able to do that.”