The history of lies on the campaign trail

In the Democratic debate last month, Vermont Sen. Bernie Sanders stated flatly that the United States has more wealth inequality than “any major country on Earth.”

None of these assertions were true.

With less than two months to go before the Iowa caucuses, candidates are resorting to fuzzy math, half-truths and even outright falsehoods to compete for media attention and votes. White House contenders today appear increasingly comfortable insisting that debatable or inaccurate statements are absolute truth. Could this be a sign that precision and accuracy matter less in politics now than ever before?

Not necessarily. In fact, the tactic isn’t new at all. Trump and his 2016 rivals belong to a long tradition of presidential candidates who have stretched the limits of truthiness on the campaign trail.

On Monday’s PBS NewsHour, Amy Walter of The Cook Political Report and Tamara Keith of NPR join NewsHour’s Gwen Ifill to tackle the question of lies and half-truths on the campaign trail.

The worst offenses of the current election cycle (so far, at least) pale in comparison to the biggest campaign lies of the modern political era.

In the run-up to the 1960 presidential election, John F. Kennedy claimed that the Soviet Union had more nuclear missiles than the U.S. It became an effective talking point for Kennedy, who continued warning about the so-called “missile gap,” and the possibility that the country might fall behind in its arms race with Russia, for the rest of his campaign.

Seventeen days after Kennedy took office, his defense secretary, Robert McNamara, admitted that the missile gap didn’t exist. Evidence has since surfaced that the Kennedy campaign likely knew about this all along, but went ahead with its claims anyway.

The gamble worked in part because presidential candidates in the early television age faced far less scrutiny than they do now, said Robert Shapiro, a political scientist at Columbia University.

With less than two months to go before the Iowa caucuses, candidates are resorting to fuzzy math, half-truths and even outright falsehoods to compete for media attention and votes.

“Kennedy’s claims were exaggerated, but at the time it wasn’t something that could be [easily] fact checked the way current claims can,” Shapiro said. Imagine trying to fact check with a rotary phone, your library card and no Internet.

Other scholars pointed to Gerald Ford’s disastrous truth-stretcher during a debate with Jimmy Carter in 1976.

“There is no Soviet domination of Eastern Europe,” Ford famously said in response to a question about Cold War-era politics.

An incredulous debate moderator offered Ford the chance to walk back the statement, but he chose to double down on his position instead, opening the door for Carter to question the president’s grasp of foreign affairs.

It’s impossible to know exactly what impact the comment had on Ford’s campaign. He faced several serious obstacles from the outset. The economy was in bad shape, voters wanted a change in Washington, and Ford had pardoned Richard Nixon — all factors that likely played a much larger role in deciding the race.

Still, Ford never fully recovered from his reality-defying take on Soviet influence. Decades later, there is still some debate about whether it cost him support among Eastern European immigrants in states like Wisconsin that voted for Carter.

“Candidates often say things that are not 100 percent true, or which they eventually don’t pursue,” and such things can come back to haunt them, Princeton University politics historian Julian Zelizer wrote in an email.

Nixon is a perfect example.

Two months after the break-in at the Watergate office complex in 1972, Nixon, who was running for reelection that year, announced that the White House had nothing to do with the incident. Nixon won, but his cover-up didn’t last long.

Bachmann and the HPV vaccine 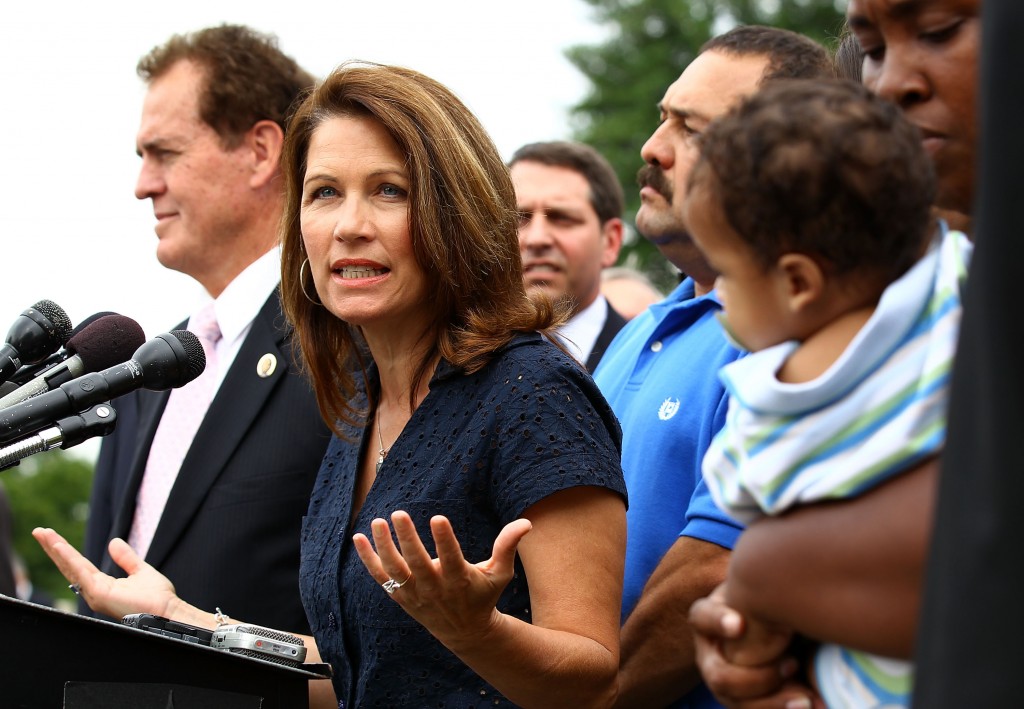 Former Rep. and GOP presidential nominee Michele Bachmann was roundly criticized for claiming in 2011 that the vaccine for HPV can lead to “mental retardation.”

More recent presidential candidates have shown a tendency to misrepresent facts that can easily be checked by a quick search on Google.

Following a Republican debate in 2011, then-Rep. Michele Bachmann of Minnesota claimed that a vaccine for the human papillomavirus virus, or HPV, can lead to “mental retardation.”

Critics seized on the comment, and Bachmann’s staunchest conservative allies conceded that the lawmaker had veered into uncharted territory.

“Bachmann might have blown it,” Rush Limbaugh, the radio show host and a vocal Bachmann supporter, said at the time. “There’s no evidence that the vaccine causes mental retardation.”

Bachmann would have faced an even greater backlash if the debate had taken place this year, said Angie Drobnic Holan, who runs the website PolitiFact, which won a Pulitzer Prize for its fact-checking coverage of the 2008 presidential election.

“I’m seeing much more coverage of false statements this cycle,” said Hanlon, whose site launched in 2007. “People are getting used to fact checking journalism, and the public has come to expect it.”

And yet candidates continue to lie.

There are several, well-researched theories as to why — despite the rise of groups like Hanlon’s — side-stepping the truth has become such a successful strategy.

“You have this level of emotional fervor at work that not only affects people’s opinions, but it’s also gotten to the point that it affects their perception of reality.”

A growing number of voters don’t trust mass media. A recent Gallup poll found that just 40 percent of Americans trust the news, down from 55 percent in 1999.

The surge of partisanship in the years since Presidents George W. Bush and Barack Obama took office has also made lying to voters, or reinforcing inaccurate views, far easier, according to Shapiro, the political scientist.

“You have this level of emotional fervor at work that not only affects people’s opinions, but it’s also gotten to the point that it affects their perception of reality,” Shapiro said. “So when Trump makes claims about the behavior of immigrants, it’s information that’s consistent with the opinions that his supporters have about immigration.”

The glut of online news and commentary hasn’t helped, either.

“In the era of the Internet there is so much information out there, true and false, and it is virtually impossible for most citizens to separate fact from fiction,” Zelizer said. “This increases the incentive for politicians to literally say anything.”

The real estate mogul said on Twitter yesterday that he would release his medical records. He couldn’t help adding a verbal flourish that can’t possibly be true.

“I have instructed my long-time doctor to issue, within two weeks, a full medical report,” Trump tweeted. “It will show perfection.”

Left: President John F. Kennedy came under fire in 1960 for exaggerating the so-called "missile gap" between the U.S. and the Soviet Union. Kennedy is one of many presidential candidates who lied on the campaign trail. Photo by STF/AFP/Getty Images